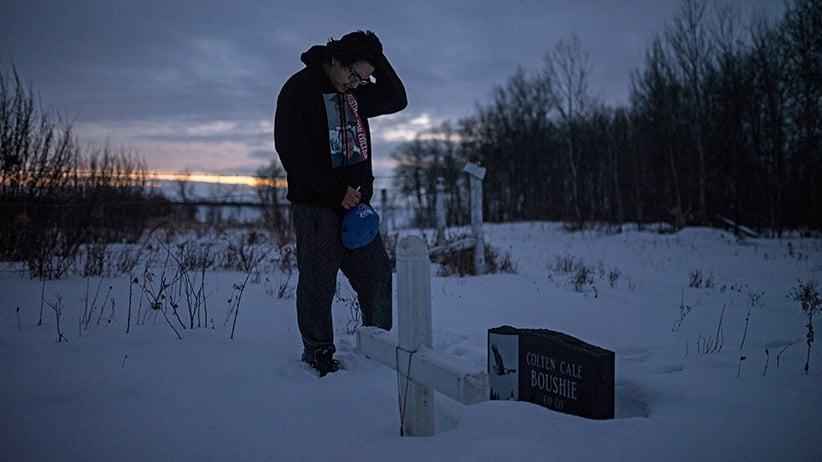 Skyler Brown, cousin of Colten Boushie, visiting the grave of his cousin on the Red Pheasant First Nation, Sask., on Feb. 16, 2018. (Photograph by Liam Richards)

“We have various people from across Canada — different experiences, different walks of life,” says Chris Murphy, lawyer for the family of Colten Boushie, the 22-year-old Cree man from Red Pheasant First Nation in Saskatchewan whose death sparked national outrage. “It seems as though Indigenous representation is conspicuously absent.”

On Mar. 19, the Boushie case reaches its next stage when Gerald Stanley is scheduled to appear in Saskatchewan provincial court on charges of unsafe storage of firearms. RCMP investigators found 10 firearms on Stanley’s cattle farm, the CBC reported, including the semi-automatic Russian-made handgun used in the fatal shooting of Boushie in August, 2016. When Stanley was tried for second-degree murder this winter, a jury found him not guilty.

Critics immediately protested that there was no Indigenous person on the jury and declared the verdict racist. Four days after the verdict, Prime Minister Justin Trudeau told the House of Commons, “we understand there are systematic problems in our criminal justice system that we must address.”

But just as there was no Indigenous juror in Stanley’s trial, neither is there an Indigenous voice on the committee of citizens appointed by Public Safety Minister Ralph Goodale to advise him on gun laws and regulations. The Canadian Firearms Advisory Committee was created in 2006, and the current cohort has met to make recommendations to Goodale in advance of a new firearms bill the Liberals are expected to table soon. The committee has diversified since the Stephen Harper era, but as Stanley returns to court and a bill goes to debate, critics say the minister is addressing semi-automatic weapons with a semi-democratic committee.

“It’s impossible to believe that new firearms laws are going to be passed in Canada that are not going to have significant impact on Indigenous people,” says Murphy.

In 2016, 142 Indigenous people died from homicide, making up 24 per cent of homicide victims in Canada, and more than one-third of homicides nationwide were committed with guns, according to Statistics Canada. In some Inuit communities, the suicide rate is 11 times higher than that of the non-Indigenous population, says the Canadian Institute for Health Research, and Stats Can shows that, between 2000 and 2009, 16 per cent of suicides in Canada involved guns.

“Committee members represent a broad range of interests because decisions about firearms affect all Canadians,” writes a spokesperson for Goodale’s office in an email. “Notably Chief Clive Weighill has extensive experience with on (sic) Indigenous issues.”

Chief Clive Weighill is a police veteran known for advocating for Indigenous people while he served as chief of the Saskatoon Police Service, having retired last year, but he is not Indigenous. “You have to have that voice,” says Kathleen Makela, a program coordinator at the University of Saskatchewan’s Native Law Centre, who is Métis. “It shouldn’t be just one position [on the committee]. Probably even three.” (Weighill couldn’t be immediately reached for comment. Federal Justice Minister Jody Wilson-Raybould declined to comment).

READ: In Saskatchewan, the Stanley verdict has re-opened centuries-old wounds

Guns also uniquely affect Indigenous communities due to adapted provisions of the Canadian Firearms Act. For the type of gun that killed Boushie, most adult Canadian citizens can get a license if they complete a minimum of 12 hours firearms safety classes, pass two tests and pass a background check by the RCMP. For Indigenous people who do traditional hunting, upon recommendation from an elder or other adult, they can get a firearms license without taking the federal firearms safety course. Minors under 12 can also get licenses if they engage in traditional hunting.

Committee member Ron Bonnett, a farmer in Bruce Mines, Ont. and president of the Canadian Federation of Agriculture, says he got a call from the Department of Public Safety in summer 2016, asking him to join the committee. Bonnett agreed. He uses guns to protect his cows from predators. “Wolves, coyotes,” he specifies, “and then we have problems with ravens, believe it or not, attacking young calves, especially when they’re asleep. They’ll come and damage their eyes.” (His wife, Cathy, also uses the guns: “If there’s something out there interfering with my livestock, it’s not going to be interfering with it very long.”)

Bonnett opposed the registry of all firearms introduced under Prime Minister Jean Chrétien in 1995. “All of a sudden it came with renewal fees,” says Bonnett. “I think the frustration was, it just seemed on the bureaucratic side … I was one of the ones who was upset, too.” Regarding the current government’s choice of committee members, Bonnett says, “I think they’ve been reaching out to the Indigenous community. It likely would bring another perspective to it.”

A spokesperson for the department did not say if Goodale tried to include Indigenous people on the committee, but writes in an email, “the government is committed to reconciliation with Indigenous peoples and recognizes that there is still more work to do. We will continue to advance policies that act on the priorities of Indigenous communities.”

The committee became highly controversial under Stephen Harper’s government, as pro-gun members recommended wide-sweeping changes to make prohibited firearms – such as automatic guns – more easily available, according to documents retrieved in 2012 by the Coalition for Gun Control. The Harper government ended up removing three members.

The Liberal Party’s 2015 campaign platform promised to modify the committee “to include knowledgeable law enforcement officers, public health advocates, representatives from women’s groups and members of the legal community.” Its platform includes promises to repeal changes made to Bill C-42, which allowed free transportation of restricted and prohibited firearms without a permit, and give an annual $100 million to police forces to tackle gun and gang violence. Goodale’s office says, “to be clear, we have said all along that we will not recreate a federal long-gun registry, and we won’t.”

“There seems to have been essentially a war on gun control waged over the last 10 years,” says Wendy Cukier, president of the Coalition for Gun Control, who argues that a vocal minority of pro-gun lobbyists pressured the Harper government to relax gun laws. She hopes lobby efforts won’t prevent the current government from introducing effective legislation, but she notes that the Liberals are focusing attention on urban gangs rather than issues such as domestic violence toward women. “It’s nowhere to be found on Mr. Public Safety’s website.”

Goodale’s office acknowledges lobby efforts by the Canadian Coalition for Firearms Rights: “the Minister’s office does speak with them and they had a member attend the Summit [on Gun and Gang Violence],” writes a spokesperson for the department in an email. But the department says it listens to “all perspectives” and that the summit in March included experts from Indigenous organizations.

The advisory committee can include up to 15 people, but Goodale’s department has no plans to fill the five vacancies. If Stanley goes to trial on his remaining charges, Murphy expects the case will be decided by a judge, not jury. And as there is only one declared First Nations judge in Saskatchewan’s provincial court (Judge Gerald Morin in Prince Albert), it will almost certainly be a non-Indigenous person deciding if Stanley unlawfully stored his firearms.