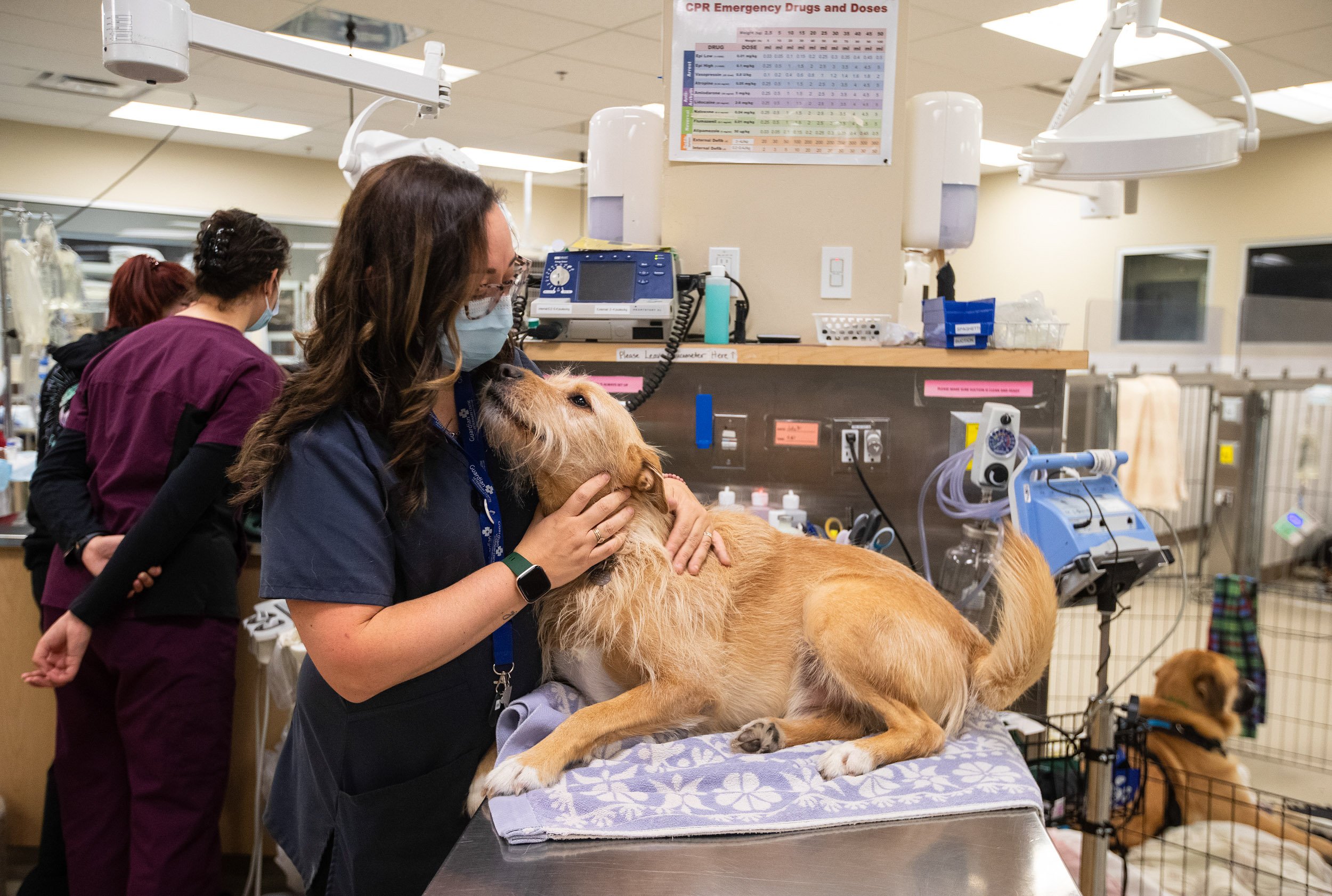 Simon at work: demand for vet services soared during the pandemic, but supply is flat (Photograph by Jason Franson)

Kate Simon, a registered veterinary technologist in Edmonton, went on maternity leave in March 2020 as the pandemic hit. She returned a year later to find the clinic where she works overwhelmed. “It was like, ‘What is happening here? This is just bizarre,’” Simon recalls.

Outside Guardian Veterinary Centre, clients sit all night in cars with sick pets in hopes of seeing a vet. Inside, a receptionist calls: “Tech to triage. Stat.” Says Simon, “You’d have a quick power bar for dinner. You’d have [staffers] crying in the corners because there is no end in sight.” Pet owners, she adds, may be told to expect a 10-hour wait, only to be informed a few hours later that the vet is too swamped to see their animal at all. “Those clients get mad,” says Simon, “and I get it. I would get mad too.”

From the perspective of animal lovers, Canada’s vet shortfall is shaping up to be a full-on crisis in the coming year—from coast to coast. Mississauga’s Clarkson Village Animal Hospital was a 24-hour clinic. Recently, short of staff, it cut its hours to 8 a.m.-8 p.m. In Penticton, B.C., a pet advocate addressed city council to plead for vet care. In Sainte-Anne-de-la-Pérade, west of Quebec City, the delay to see a vet for deworming medication has grown so long that breeder Marie Côté says her border collie puppies are thinner and growing more slowly. Her vet ignored her calls for weeks. Only after she went on TV to complain, she says, did she get results: “I got my medication the next day.”

Demand for vet care rose before the pandemic. In 2018, about seven million dogs visited the vet, up from five million a decade earlier. Then came COVID protocols: clinics admitted the animals and talked to the owners by phone. This takes “three times as long,” one vet says. Plus, thousands of Canadians, suddenly working from home, took in puppies or kittens for company. “More and more young people are adopting animals,” says Dr. Bikram Dayed, a vet in Toronto, who expanded his clinic staff from three to five.

READ: A B.C. mountain goat was the unlikely champion in a match against a grizzly

Our relationship with cats and dogs is evolving, too. Simon, the vet tech, says that 20 years ago when she quoted the price for cataract surgery for a dog, she’d occasionally hear, “I’m not paying for that. A bullet is cheaper.” She doesn’t get that now. Dr. Louis Kwantes, an Edmonton vet who heads the Canadian Veterinary Medical Association, says owners’ expectations have increased. Vets, he says, “spend twice as much time with each pet as we used to. We have more tests, more tools.”

The supply of vets, though, has remained flat for years. Canada’s five colleges of veterinary medicine turn out about 350 grads annually—not nearly enough. Every year, more vets retire than graduate, and while creating more spaces in veterinary schools seems an obvious fix, provincial governments won’t pay. The Atlantic Veterinary College in Charlottetown opened in 1986 with room for 40 students per year from Atlantic Canada. Today it has 42 such spaces, and rejects up to six qualified applicants for every one it accepts. To make ends meet, the school takes in an additional 26 students from other countries each year (up from 10 in 1986), who pay $69,000 per year, compared to $13,800 a year for Canadians. If they can afford it, rejected Canadian students head abroad to study veterinary medicine.

Trouble is, expanding vet schools is costly. Dr. Jeffrey Wichtel, dean of the Ontario Veterinary College in Guelph, Ont., says that for universities, educating vets costs more than educating students in any other field. “In human medicine you have a taxpayer-funded health-care system where we can train human doctors.” And long before the pet-vet crunch, Canadian farmers struggled with a vet shortage—most acutely in Quebec.

MORE: The beetle scientist on a mission to name the world’s most beguiling bugs

But in that province there may be a glimmer of hope. Canada’s sole French vet school, the Faculté de médecine vétérinaire de l’Université de Montréal, in Saint-Hyacinthe, admits just 96 students a year from 1,000 qualified applicants, says the dean, Dr. Christine Theoret, a specialist in equine surgery. Now, with $650,000 in provincial funding, her school has completed a feasibility study on opening a satellite vet campus at the Université du Québec à Rimouski, east of Quebec City. That plan would grow admissions by 25 students, who would learn mainly in Rimouski, with one year on the main campus.

Dr. Theoret’s plan envisages new buildings in Rimouski and Saint-Hyacinthe. She expects the province to decide in June. Côté supports the idea, and other provinces are watching. “We are looking to Quebec,” says Dr. Wichtel in Guelph, who dreams of opening a satellite campus in Thunder Bay, Ont.

There is a more immediate solution: vets can give more work and better pay to veterinary technologists, who, after two years of training, often start at $20 or $22 an hour. Like other vets, Dr. Erin Spence, who runs a four-vet practice in Toronto, has a hard time finding good techs. “Your technicians are your backbone,” she says. “We’ve lost a lot of them to burnout. They are on their feet all day, getting bitten, scratched, lifting heavy dogs.”

READ: At the Calgary Zoo, the camels watch the people

Edmonton’s Kate Simon, for one, is a criticalist, skilled at blood transfusion and administering ventilation and feeding tubes—knowledge she says techs like her “need to be able to use.” Harried vets and anxious animal owners would surely agree. In the coming months, skills in animal health care will count among the commodities we can’t afford to waste.

This article appears in print in the January 2022 issue of Maclean’s magazine with the headline, “Ruff days at the office.” Subscribe to the monthly print magazine here.