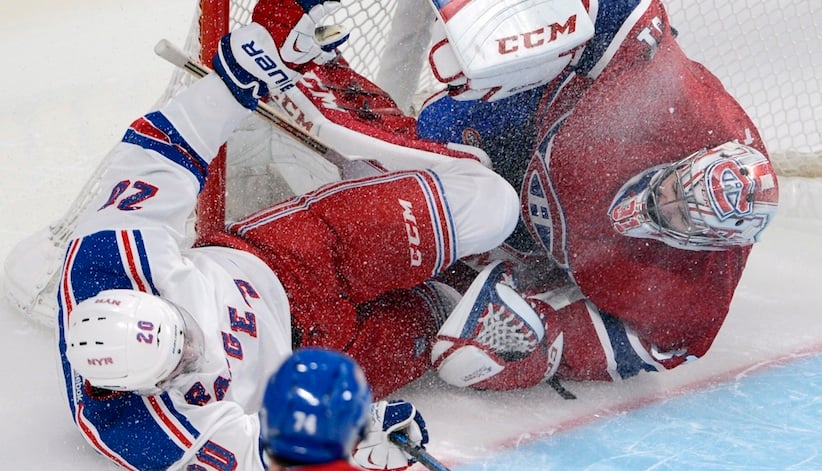 MONTREAL – Carey Price was in a class by himself this year.

Already loaded with trophies and awards for a spectacular season, the Montreal Canadiens goaltender is adding one more achievement to his 2015 resume after dominating the voting for the Lionel Conacher Award as The Canadian Press male athlete of the year.

Price collected 53 per cent of the votes (30) cast by sports editors and broadcasters across the country.

“This one’s special,” said Price, who on Dec. 15 also won the Toronto Star’s Lou Marsh award as Canadian athlete of the year. “Being compared with athletes from other sports, it’s unique for me.

“I’m very honoured. It’s something I’ll look back at the end of my athletic career and probably highlight one of these as one of the top.”

Sprinter Andre De Grasse of Markham, Ont., was second with 28 per cent of the votes (16).

Price, a Vancouver native who grew up in Anahim Lake, B.C., ended Raonic’s two-year run and is the first hockey player to win since Pittsburgh Penguins captain Sidney Crosby won it for the third time in 2010. He’s the first goaltender to take home the award, which has been handed out since 1932.

The 28-year-old Price took his craft to a new level in the 2014-15 season, leading the National Hockey League with a 1.96 goals-against average and a .933 save percentage. His play lifted the Canadiens, who leaned heavily on goaltending for victories, to second place overall in the 30-team league.

He took the Hart Trophy as the league’s most valuable player, the Ted Lindsay Trophy as the NHL’s best player as voted by his fellow players and the Vezina Trophy as top goaltender. He also shared the Jennings Trophy for fewest goals allowed with Corey Crawford of the Stanley Cup champion Chicago Blackhawks.

Most voters saw no other choice for the Conacher award.

“Carey Price dominated his sport like few others have done before him,” wrote ­Pierre Champoux, digital director for Radio-Canada.

“Arguably the best goalie in the world had arguably his best individual season stopping pucks in what is inarguably the most-followed sport in his home country. Yep, that’s an easy choice,” wrote Sean Rooney, sports editor of the Medicine Hat News.

Awards are not new to Price, who was named top goalie in Canadian junior hockey in 2007 while with the Tri-City Americans of the Western Hockey League.

After the Americans were eliminated from the WHL playoffs, Price joined the Hamilton Bulldogs of the American Hockey League and helped the Canadiens farm club win the Calder Cup. He was named MVP of the playoffs.

The Canadiens made Price the fifth overall pick of the 2005 draft, despite calls from fans to select a skilled offensive player.

The six-foot-three Price’s talent was always evident, even if it took a few years to secure his spot as a starter and put up all-star numbers.

The turning point was 2013-14, when he was named to Canada’s Olympic team. Coach Mike Babcock chose him as the starter over Roberto Luongo and Price backstopped Canada to gold, allowing only three goals on 106 shots in five games in Sochi.

In elimination games, he conceded one goal on 71 shots, shutting out the United States and Sweden in the last two games. He was named best goalie of the Olympics.

He followed that with the career season that won him all the hardware.

And he showed up to training camp this season saying he can still do better.

“The Olympics was definitely a learning experience; to see all the great players on our team and the way they prepared and the way they carried themselves in stressful situations,” he said. “Being able to take those ideals and apply them to my own preparation is ultimately how you continue to get better.

“So hopefully I do have more gas in the tank.”

Babcock has spoken of how Price has an ideal demeanour for a goalie — quiet, calm and focused on the job. But he is not without personality. He has taken part in rodeo calf roping in the off-season, after all.

And he has become a role model for native Canadians. He is part of the Ulkatcho First Nation on his mother Lynda’s side and had a message for native youth in his speech after accepting the Vezina Trophy in Las Vegas in June.

“People would say it’s very improbable that I’d make it to this point in my life,” he told them. “I made it here because I wasn’t discouraged.

“I worked hard to get here, took advantage of every opportunity that I had. And I would really like to encourage First Nations youth to be leaders in their communities. Be proud of your heritage, and don’t be discouraged from the improbable.”

He is also about to become a father. His wife Angela is due in the spring, which could be right in the middle of the NHL playoffs.

“There’s obviously a big life step that me and my wife have been taking this year,” he said. “That’s been a lot on its own, to go with everything else.

“I guess that’s one thing that’s kept me grounded, realizing that life is so much bigger than just sports.”