"The evidence is overwhelming that these are the remains," says the lead scientist

A portrait of Richard III. (Society of Antiquaries of London)

There are always skeptics. In February 2013, when scientists announced that the skeleton dug out of the parking lot in Leicester, England, in 2012 was that of King Richard III, some scholars raised questions. Could the bones have belonged to another Plantagenet who shared the same mitochondrial DNA as Richard? The DNA comparison was from Michael Ibsen, the Canadian-born cabinetmaker who is a direct maternal descendant of Richard’s sister, Anne. But critics pointed out there could be up to 17 million descendants of Richard’s extended family alive today. Or was it the result of a simple matter of chance?

Now, an international team headed by Turi King of the University of Leicester has finished a major DNA and genealogical study of Richard and can say, with a “conservative” 99.999 per cent certainty, that the body is that of the king slain at the Battle of Bosworth in 1485. The study, published on Dec. 2 in Nature Communications, does extensive DNA and genealogical research to leave no stone unturned. “Nothing was left to chance,” explains co-author Kevin Schürer, also of the University of Leicester. Since Ibsen’s descent from Anne of York was “well-known but not well-evidenced,” he and his fellow researchers filled in the blanks with solid documentation. They also located a second mitochondrial line from Richard’s sister, Anne: Wendy Duldig, the 14th cousin, twice removed from Michael Ibsen. The analysis was done in two separate labs—Leicester and Toulouse—because, as King explains, fragmented ancient DNA can easily be cross-contaminated with modern DNA, including that of scientists. The three samples—from the skeleton, Ibsen and Duldig— were perfect matches, though, in the case of Ibsen, there was a one-letter difference, which King calls a “little typo over generations.” The DNA proved to be rare, with no matches in consulted databases.

Then the researchers attempted to trace Richard’s DNA through the Y chromosome of the male line. That proved more difficult. Because the king has no known descendants, the scientists went “back up” his own family to his great-great-grandfather, King Edward III, who died in 1377, then back down that king’s male line through John of Gaunt and into the descendants of the dukes of Beaufort, who would, theoretically, share the same DNA from Edward III as Richard III. The scientists found five living descendants who agreed to donate DNA and who were not closely related to each other.

Unfortunately, they didn’t find a Y chromosome match. There were two “breaks” in the DNA comparison. First, while the five were supposed to be descendants of the 5th duke of Beaufort, who died in 1803, one of those five wasn’t related to the other four due to a “false-paternity event”—in other words, a father was misidentified as the parent of a child somewhere in the written genealogy. (The ease of such a misidentification is why mitochondrial DNA is preferred for such DNA comparisons.)

When the remaining four were compared to Richard, none matched the dead king. The scientists believe another break—another “false-paternity event”—occurred somewhere in the 19 links in the chain between Richard III and Henry, 5th duke of Beaufort. Without more research, and testing, no one can be sure exactly where the break is.

What if the body belonged to another Plantagenet? Schürer traced 184 possible relatives—every male near Richard’s age within his kinship group—and discounted all but one distant cousin, Robert Eure. The researchers couldn’t find any evidence of his death. However, given Eure was a knight of St. John, they believe he could have died overseas. There is no evidence he was at Bosworth or had scoliosis, as was the case with Richard III.

Finally, the researchers undertook a statistical analysis to determine the probability that the remains are those of Richard III or could belong to someone else. As the paper states, they considered “the non-genetic data (radiocarbon data, estimated age at death, sex, presence of scoliosis and the presence of perimortem wound), together with the genetic data.” Using the most conservative assumptions possible, the likelihood that the remains belong to Richard ranged from 99.9994 per cent in favour to 99.99999 per cent. “The evidence is overwhelming that these are the remains of Richard III,” says Turi King.

Finally, since all portraits of the king were painted at least 25 years after his death, they used all the DNA evidence to make a best guess as to his hair and eye colour. They are 96 per cent confident his eyes were blue and are 77 per cent sure he had blond hair as a child, though they say it could have darkened with age. One of the earliest surviving portraits, belonging to the Society of Antiquaries of London and painted around 1510, features a blue-eyed Richard with relatively light hair. It’s their choice for the best guess as to his likeness.

While the scientific research is coming to an end, the fascination with Richard III shows no sign of ending. At the end of March, the last English king to die in battle will be given the dignified burial long denied him. He will be re-interred in Leicester, this time, in a tomb in its cathedral. 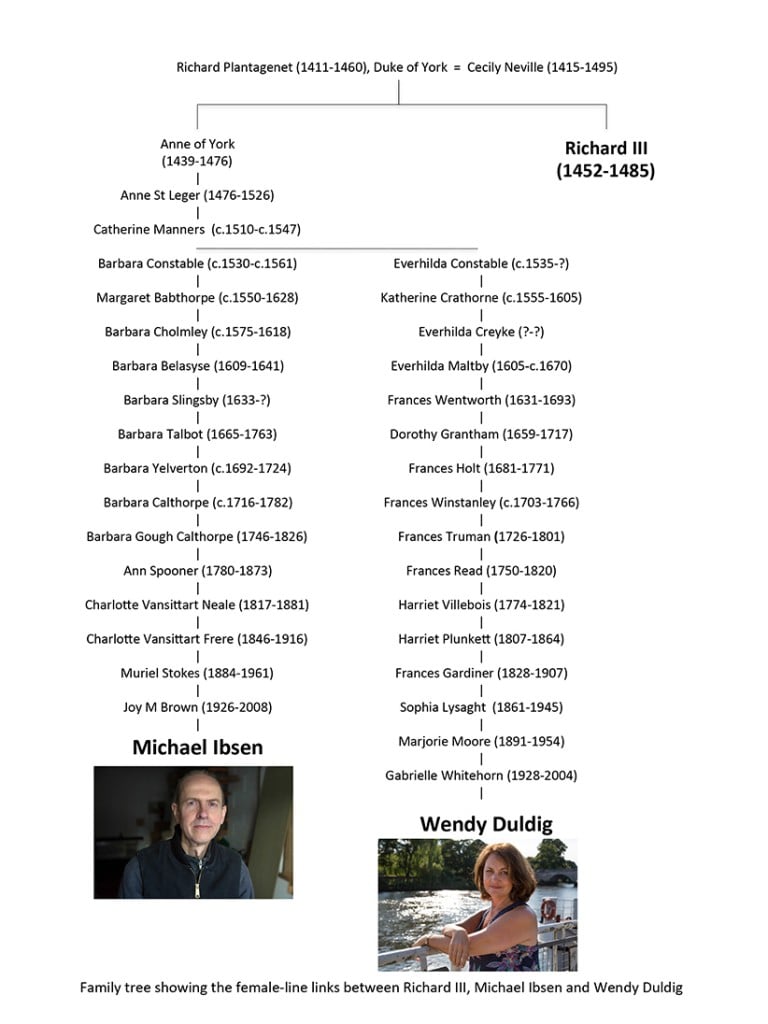 “Identification of the remains of King Richard III,” Nature Communications, 2014