Chalk and awe: Why professors are going wild over a cult chalk

Mathematicians are paying big bucks to stockpile the Hagoromo chalk from Japan, which some have called 'the nectar of the gods' 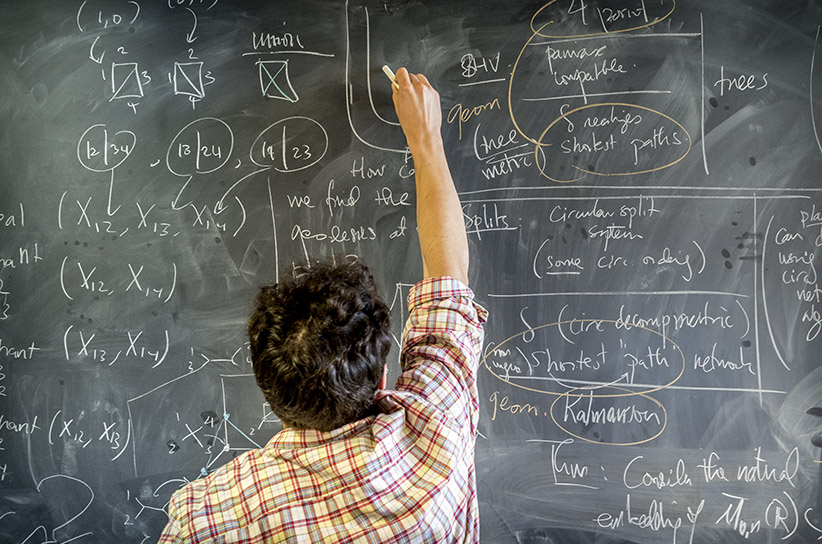 In Greece, there’s been a rush on the banks. In mathematical circles, there’s panic over a shortage of chalk, but not just any chalk: Hagoromo chalk, from Japan. On Amazon—where a box of 72 pieces of white chalk was recently selling for $79 (formerly about $25), coloured costing $399—the reviews testify: “The Mercedes of chalk.” “This soft chalk is the nectar of the gods.” “It is a well-known fact that, if you write math with this chalk, you do not make any mistakes.” “The best chalk in the world.”

Sadly, Hagoromo Bungu Co. found itself a victim of the rise of the whiteboard and the declining use of blackboards in classrooms. The company, which began production in 1932 and, at its peak, sold 90 million pieces of chalk a year, ceased production at the end of March and is going out of business.

Satyan Devadoss, a mathematics professor at Williams College in Williamstown, Mass., seems to be serving as ambassador of the angst, and reigning expert on Hagoromo’s magical properties. “There are a couple of things that are important. One is the thickness of the chalk,” he says. “It is much thicker in diameter, so it has a heft to it.” His favourite thing about Hagoromo, however, is its firmness and, at once, its give. “The firmness helps you be aggressive in your drawing, or in your writing, which is actually important. A lot of times, when I push just a little bit hard on chalk, the chalk breaks and crumbles.” Not Hagoromo. “The second thing is, when you start writing, it melts like butter. It’s just gorgeous. It gives way to smooth writing.”

Mathematician John Mighton, a member at the Fields Institute for Research in Mathematical Sciences in Toronto, was caught unaware of the chalk panic. “I’m afraid I don’t know anything about chalk,” he said, “except that I occasionally get it all over my clothes.” He wouldn’t, if he used Hagoromo. Each piece of Hagoromo has a wax coating, reducing dust and preventing chapped fingers.

At Stanford, mathematicians are mourning Hagoromo’s demise as “a tragedy for mathematics.” One professor has reportedly hoarded a stock of chalk to last him 15 years.

“This is related to something that is far more important,” says Devadoss, getting philosophical, “which is how much we as humans truly value the physical, but don’t realize it.” Mathematics is mostly a purely intellectual pursuit, dealing in abstractions. But, Devadoss reckons, corporeal things, such as smell and taste and touch, do matter.

Devadoss extolls the essence of chalk, as opposed to, say, whiteboard markers. “I don’t know why any human would prefer a marker,” he says—and indeed, for many, the whiteboard is heresy; they hate the smell of the markers, hate the ink all over their fingers. “Every whiteboard works with every marker. Blackboards and chalk are wholly different beasts,” says Devadoss. “Each has its own personality, its own rhythm, and, when you find two made for each other, it is a piece of heaven on Earth. I find whiteboards to be artificial and plasticky in nature, impeding the flow of thoughts and ideas.”

One way to tell whether chalk is any good, he explains, is to take a couple of pieces and roll them back and forth in your hand. “You will hear the [pieces] hitting each other. The deeper the sound, the better the chalk. A lot of chalk almost tingles like crystal. I immediately throw the chalk away. It’s awful. With that chalk, when you write on the board, you actually can’t erase it; the marks stay, and it’s really hard to get off. It’s disgusting.” The deeper the sound, the richer the chalk. “It’s the umami of chalk,” he ventures. “It resonates.”

At the Perimeter Institute for Theoretical Physics in Waterloo, Ont., the house chalk is Crayola for white, Dixon for coloured. “I enjoy using good chalk,” says resident physicist Lee Smolin, who has a strong preference for slate over whiteboards. “It’s obvious and disappointing when bad chalk is offered. But I never heard of this particular chalk.”

“Apparently, Hagoromo chalk is not widely used by physicists,” says Eamon O’Flynn, Perimeter’s external relations specialist. “The ones who had heard of it suggested it was more of a math thing.” And those who hadn’t? “They are intrigued,” he says, “and a few have joined the rush to buy some while it lasts.”