Curious and always eager to learn, he loved to play devil’s advocate. A new father, he recently ran for the Libertarian party. 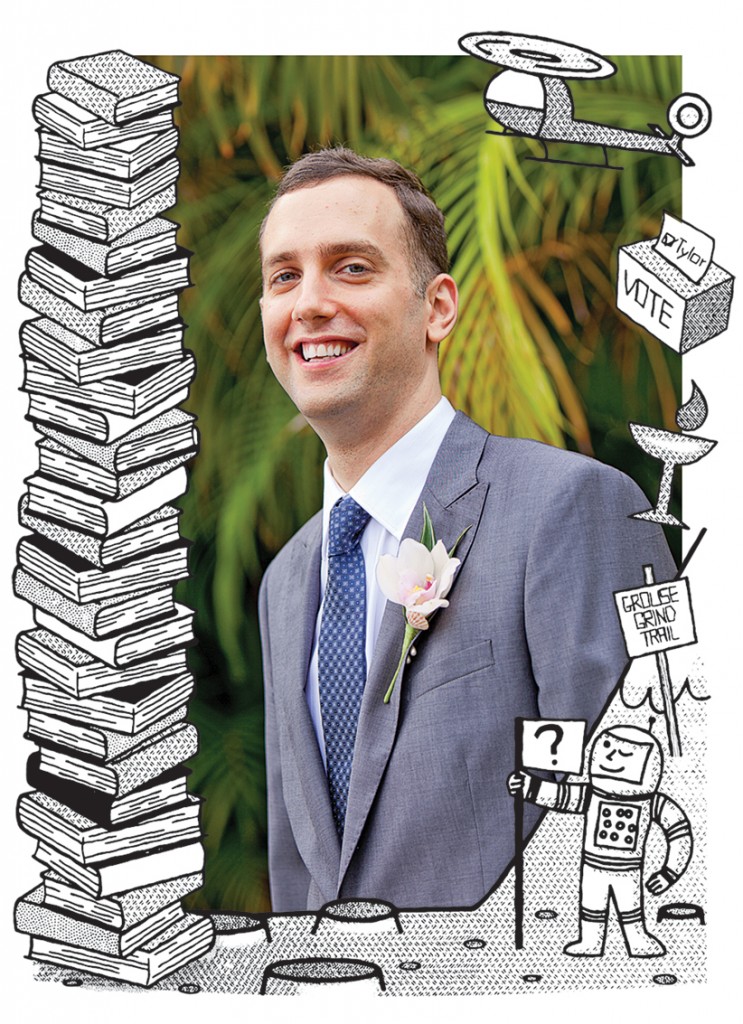 Chris Richard Tylor was born in Montreal on Sept. 15, 1980, to Rick, the owner of a sporting goods manufacturer, and Isabelle, who did the company books. Chris was their second child. Daughter Dale was born in 1978 and Brett in 1986. When Isabelle’s water broke with Chris, she urged Rick to get camera film so they could record the birth. Rick insisted on taking her to the hospital first, then headed out for film. Returning to the hospital 15 minutes later, he recalls, “I saw a baby wheeled by, and thought, what a cute baby! Well, that was him.”

Chris was a curious child, constantly peppering his parents with questions. Though he played basketball and baseball in school and was a devout Boston Red Sox fan, it was his mind he truly loved to exercise. He spent hours reading books, visiting the library and researching subjects on the Internet.“He was always searching for something,” says his father.

At McGill University, Chris majored in philosophy and joined the debate team. That, says sister Dale, is where he started playing devil’s advocate. “I think it started him to relish the role of the conspiracy theorist.” Chris, who didn’t care too much about what others thought about him, embraced conspiracies, from the alleged dangers of vaccines to the apparent faking of the moon landing. Dale doubts Chris really believed the theories. “But he definitely enjoyed getting under your skin trying to plant doubt in mainstream beliefs.”

Before starting his second year at McGill, Chris announced he was taking a year off to read. “He basically stayed in his room for a year,” says Rick. “He’d come out to eat, jaunt to the library, but that was about it.” Chris read hundreds of books that year, on history, politics, religion and many other subjects.

Graduating from McGill, however, he realized his philosophy degree wouldn’t land him a great career. So he moved to Edmonton, earning a degree in electrical engineering technology at the Northern Alberta Institute of Technology (NAIT). In Edmonton he also delved into religion. “Being Chris,” says Dale, “he jumped all in.” He tried the Calvinist and Reformed Presbyterian denominations and was part of the Unitarian Church for a time. But he annoyed church superiors by constantly challenging their dogma. He got excommunicated twice.

After NAIT, Chris got a job with BC Hydro in Nelson, B.C. He helicoptered onto mountain peaks all over the province to install and repair equipment. He loved the work so much he nudged his brother, Brett, into a similar career. Chris then moved to Burnaby, B.C., with his job.

On Aug. 15, 2009, while hiking the famously tough “Grouse Grind” in Vancouver, he met Winnie Trieu, an Australian nurse and midwife who was visiting on a work visa. The six-foot-three Chris noticed the four-foot-ten Winnie struggling “I was actually trying to get left behind, it was so steep,” says Winnie. But Chris, refusing to let her turn back on her own, urged her up and stuck with her, pulling her up some steps that were more than half her height. Afterwards, he offered to exchange email addresses with her—but, being a private guy, not his phone number. “He looked at me,” says Winnie, “and said, ‘Um, I don’t feel comfortable giving you my number yet.’ I thought that was pretty funny. He’s so tall and I’m so short. It’s not like I could do anything to him.” Especially considering Chris was studying Krav Maga, an Israeli martial art.

They started hanging around together. But it wasn’t until Winnie returned to Australia just three weeks after they met that the couple realized how much they cared for each other. Winnie returned to Burnaby in 2010 and they moved in together. They wed in Oahu on Dec. 3, 2011. He and Winnie got a dog, a beloved Eurasier named Calvin. On April 23, 2015, their daughter, Arianna, was born.

In last October’s federal election, Chris ran for the Libertarian Party of Canada in the Burnaby–North Seymour riding, coming in fifth. But he ensured he made time to dote on Arianna, singing her his favourite lullabies and posting numerous photos of her to friends and family. “He was really excited by fatherhood,” says Winnie.

In December, Chris and Winnie took Arianna, then seven months old, to Sydney, Australia, to visit Winnie’s family. At a beach on Dec. 12, Chris, despite being a good swimmer, was swept away in a rip current and drowned. He was 35.