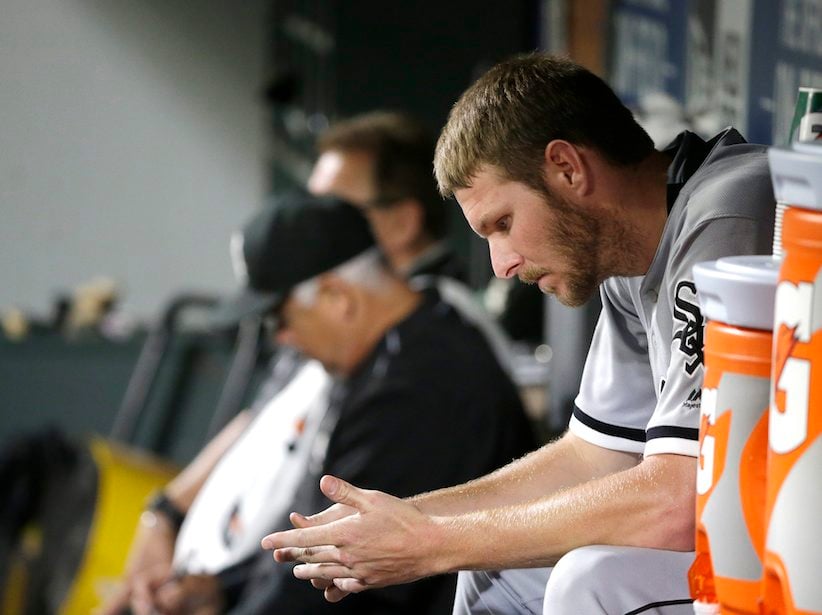 Chicago White Sox pitcher Chris Sale sits in the dugout after he threw eight shutout innings against the Seattle Mariners, giving up one hit, in a baseball game, Monday, July 18, 2016, in Seattle.  (AP Photo/Ted S. Warren)

CHICAGO — The Chicago White Sox were set to wear throwback uniforms. Chris Sale had other ideas.

The White Sox suspended their ace five days without pay for destroying collared throwback uniforms the team was scheduled to wear.

The team announced the punishment on Sunday after Sale was scratched from his scheduled start and sent home the previous night.

The suspension comes to $250,000 of his $9.15 million salary. He was also fined about $12,700 — the cost of the destroyed jerseys — according to a person familiar with the penalty. The person spoke on the condition of anonymity because no statements were authorized.

“Obviously we’re all extremely disappointed that we have to deal with this issue at this time both from the standpoint of the club as well as Chris’ perspective,” general manager Rick Hahn said. “It’s unfortunate that it has become this level of an issue and potential distraction taking away from what we’re trying to accomplish on the field.”

Sale was not expected at the ballpark on Sunday. He is eligible to return Thursday against the crosstown Cubs at Wrigley Field, though Hahn would not say if the left-hander would start that game.

FanRag Sports first reported Sale was protesting the 1976-style jerseys, which were navy and sported unusual collars on a hot and humid night.

Sale then cut up an unknown number of jerseys before the game and was told to leave the stadium. With not enough usable 1976 jerseys available, the White Sox wore white throwback uniforms from the 1983 season.

The incident comes with the White Sox in a tailspin after a 23-10 start and Sale’s name circulating in trade rumours.

“The actions or behaviours of the last 24 hours does not change in any aspect, any respect, our belief that Chris Sale can help this club win a championship and win multiple championships,” Hahn said. “It does not move the needle one iota in terms of his value to this club, his value to any other club that may be interested in his services or the likelihood of him being moved or kept whatsoever. None of that stuff is impacted at all by these events.”

The incident does raise some questions in general about throwback uniforms, how players feel about them and whether they should be forced to wear jerseys that aren’t comfortable — particularly starting pitchers.

New York Yankees pitcher Chasen Shreve said: “Pitchers like their stuff. Me, it doesn’t bother me, but for him, obviously it does. It’s crazy. I don’t think I’m that bad.”

White Sox pitcher James Shields wouldn’t comment on whether players should be made to wear throwback jerseys. But he did say: “I don’t really mind the throwbacks. I haven’t had any issues with that.”

Hahn said throwback uniforms the White Sox wore last season were a bit baggy so the team took measurements in spring training so they would fit the players better. He also mentioned the money the uniforms generate.

“Part of the element of being in position to win a championship is the revenue side of the operation and respect for their reasonable requests to increase revenue,” Hahn said.

This wasn’t the first flare-up involving the 27-year-old Sale, who is known for his competitive streak and strict training regimen.

He was openly critical of team executive Ken Williams during spring training when he said Drake LaRoche, the son of teammate Adam LaRoche, would no longer be allowed in the clubhouse. Adam LaRoche retired as a result, and Sale hung the LaRoches’ jerseys in his locker.

He was also suspended five games by Major League Baseball last season for his role in a brawl at Kansas City that started with a flare-up between teammate Adam Eaton and the Royals’ Yordano Ventura. Sale went to the Royals clubhouse after he got tossed and was seen pounding on the door.

Hahn said the punishment was unrelated to previous incidents. He also said the two had a “very candid” meeting in his office with Sale after the pitcher had some exchanges with staff members in the clubhouse and that both “expressed remorse.” They spoke again on Sunday.

“At that point last night Chris stood by his actions,” Hahn said. “Part of what makes Chris great, part of what makes him elite, is his passion and commitment. We’ve seen that sometimes spill out from between the white lines. Yesterday was one of those instances and it unfortunately led to events that required discipline.”