The pandemic has interrupted world record attempts—and spawned new ones 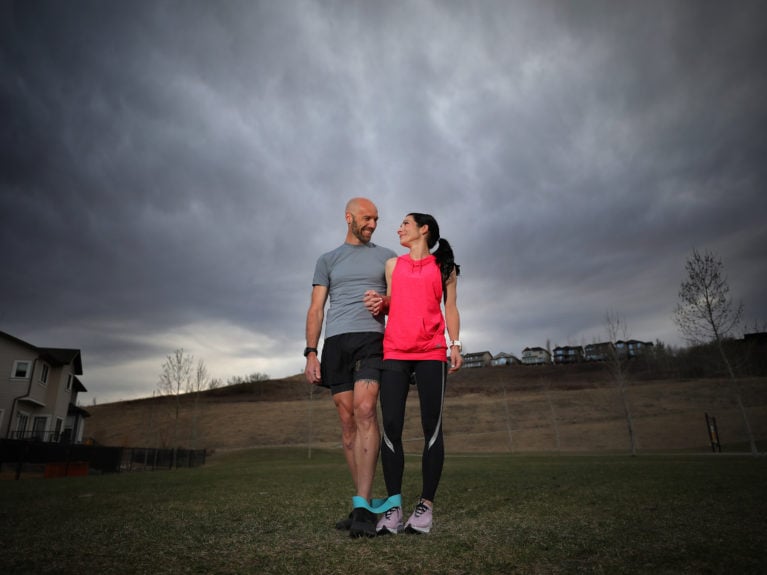 Rainier and Melissa Paauwe, practice for the three-legged competition for Guinness near their home in Calgary, Alta., on April 30, 2020 (Photograph by Leah Hennel)

A couple weeks after the pandemic shut down Canada, Rainier and Melissa Paauwe stopped regularly tying their ankles together. The dream was over, the awkward training redundant—the Calgary couple would not try to run the fastest three-legged half-marathon in May. The world record set by Britain’s Alastair and Nick Benbow would remain safe, as it has been for 17 years.

The indefinite postponement of the Calgary Marathon also meant Blaine Penny would not vie to run history’s swiftest half-marathon by somebody dressed as a battery. Penny would have to be content having his name in the record books once, for his battery-costumed full marathon a couple of years ago.

The global coronavirus crisis and related shutdowns have required new usages of just about every superlative—especially in reference to illness and economic slowdown. Biggest, widest, quickest, longest, deepest. Worst.

To that long list of things facing massive upheaval, you can now add the gold standard in measuring obscure superlatives themselves: Guinness World Records. If you can’t hold the marathon, you can’t invite the records adjudicator to Calgary to measure if a 97-minute, 21.1-km three-legged race was indeed run to historic specifications. And if large crowds cannot gather on Canada Day, there will be no way to perform a record-setting drum circle with 1,683 performers across 17 cities, coast to coast.

The mass drumming will instead move online, and many cities are still keen to join in, says Vancouver-based organizer Helen Yu. “It’s not as fun, but we’ll do whatever we can,” she says. “We can always try again next year.”

Still, the pandemic hasn’t broken the world-records sector, itself. It cannot quash the spirit of those who dream of shattering ceilings and benchmarks alike. Officials with London-based Guinness World Records say the number of new record applications has dropped only slightly. While this economy, like others, is disrupted—no more organized-sport records or mass gathering events like the most people forming a human maple leaf (Trenton, Ont., 2019), or the most combines simultaneously harvesting a field (Winkler, Man., 2018)—record attempts have moved indoors or into the backyard, where the risk of viral spread is reduced but achievement can still be great.

For professional cyclist Travis Samuel, ambition took him into his father’s garage in Whitby, Ont. With the racing circuit closed, he decided to join a 24-hour virtual team-cycle ride as part of a hospital fundraiser. “I threw out the idea, kind of jokingly, to go after the world record of distance,” he says. “Then one thing led to another.” It meant pedalling at more than 41 km/h for the entire day—the equivalent of 1,000 km—on a Zwift stationary bike’s simulator course. He’d never biked continuously for more than nine hours before, but reckoned he was in the kind of elite condition to become the world’s best. (Turns out he was: Samuel achieved his goal on April 25, after cycling 1,008 km in 24 hours.)

Other pandemic-era record attempts reflect Canada’s new cooped-in reality. They include most pen spins around the thumb in one minute, most sticky notes stuck on the body in 30 seconds and video game-related attempts like the longest redstone trail in Minecraft, says spokeswoman Amanda Marcus.

The Guinness World Records organization, too, has had to adjust to the world’s physically distant new reality. (It cut ties in 2001 with the brewing giant that launched it, and is now owned by B.C.’s Jim Pattison.) Its adjudicators no longer travel to events in their spiffy navy blazers with grey trim and gold buttons to provide instant verification. But they do offer video adjudications. They’ve also loosened their requirements to allow witnesses to file verification reports remotely. “Obviously right now we don’t want to encourage anyone to have anyone else in their homes,” says senior records manager Spencer Cammarano by video-chat from New York.

When Sara Carson and her collie, Hero, tied the world record with 60 different dog tricks in a minute, her neighbours served as witnesses, watching over the fence as Hero rapidly rolled over, waved, spun, did a tire jump and more. The professional trainer-and-dog pair were reclaiming a record they’d lost last year. “The only thing the pandemic did for me was give me time to break it,” said Carson, who is from North Bay, Ont., but now lives in Los Angeles. “I was supposed to be on the road for seven weeks on a tour and that got cancelled.”

At Science North in Sudbury, Ont., staff managed to finish the world’s largest binary code message made with tin cans (it spelled out “Science North” in ones and zeroes in an 8,000-can display) and get the record verified in mid-March—days before Ontario closed all such non-essential workplaces. In addition to providing tinned food to the local food bank, the feat served as a kickoff event for the science centre’s new Guinness World Records exhibit. The display was shuttered one week into its scheduled six-month run.

The quirky record bids by Calgary’s half-marathoners will have to wait, as well. It’s a letdown for MitoCanada, a charity fighting mitochondrial disease that uses big events like marathons to raise funds. But it gives the runners themselves time to train. Blaine Penny still needs to get used to the chafing around the neck and knees that occurs on long runs in a battery costume. And by March, Rainier and Melissa Paauwe were still figuring out how to run 100 m in three-legged mode, much less 21.1 km, without slapping their hips together or stepping on each other’s toes. With indoor tracks closed through Alberta’s icy spring, finding any place to train was a challenge. “We couldn’t jump on the treadmill and run together,” Rainier says.

This article appears in print in the June 2020 issue of Maclean’s magazine with the headline, “Great feats, interrupted.” Subscribe to the monthly print magazine here.