Former Cosby Show actor Lili Bernard is disgusted with the defence's attacks on Andrea Constand, but believes the accused has been 'disempowered' 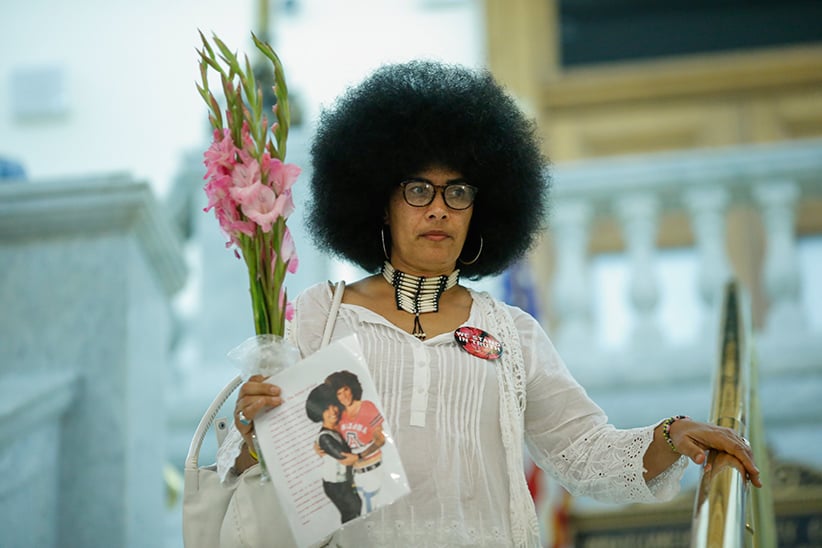 Lili Bernard, who has accused Cosby of sexual harassment, walks outside the court room at his trial (Eduardo Munoz Alvarez-Pool/Getty Images)

The Bill Cosby sexual assault trial has also provided a forum—even a mobilization point—for Cosby’s other accusers. More than 60 women came forward with reports the entertainer drugged and assaulted them, after Andrea Constand made public her allegations in 2005. About a half dozen of these women could be seen in the gallery on any given day of the trial. Lili Bernard, Jewel Allison, Victoria Valentino, Therese Serignese, Linda Kirkpatrick, and Barbara Bowman have sat in courtroom A of the Montgomery County Courthouse in Norristown, Pa. Some are involved in ongoing civil litigation with Cosby. They congregate with solidarity and affection, wearing “We Stand in Truth” buttons. Bernard, an L.A.-based visual artist, actor and writer, who alleges Cosby drugged and assaulted her in 1992 when she appeared on The Cosby Show, has been here since Day One of the trial, attired in white, the colour of sexual assault awareness. At the beginning of the trial, she carried pink gladiolus, a flower seen to represent strength and moral courage.  Maclean’s spoke with her at 9 a.m. Thursday morning as the jury entered its fourth day of deliberations.

Q: What are your thoughts on how the trial was conducted?

A: What I have been witnessing in the courtroom has not been justice. To me it’s been more like a three-ring circus of rape culture.

Q: When you say rape culture, could you be more specific?

A: The character assassination of victims, the re-victimizing of the victim, the rape myths being hammered by the defence in order to distract the jury—the way evidence has been misrepresented. The defence kept suggesting that Kelly [Johnson, the first witness called who testified Cosby drugged and sexually assaulted her in 1996] took drugs in the 1980s. How is that remotely connected to whether Cosby raped her? There was the time that they said out of more than 70 phone calls, 53 were initiated by Andrea. At one point, the [defence] lawyer said 70 were initiated and no one corrected it. Of the 50 calls initiated, though, they were in response to messages Cosby left her—she had an obligation to return them as an employee of the institution where he was on the board of trustees. The defence also said: “You were lying down in bed with Cosby”—that wasn’t true, she never said that. She had to clarify that he was lying down and she was sitting up on the bed.

What we’re seeing [in the cross-examination of Constand] is one of the reasons rape victims do not report.

Q: What was your assessment of the prosecution’s performance?

A: The prosecution mounted a strong case. I saw such real emotion in terms of the victims—Andrea and Kelly. There was such real emotion, not only from the victims but the mothers who corroborated their accounts. We saw Andrea’s and Kelly’s accounts corroborated by law enforcement—by detectives and the lawyer/judge who took Kelly’s deposition back in 1996. We saw veracity and validity and truth. There were some times I was disappointed; I would have liked the prosecution to cry out objection where evidence was misrepresented. They presented a winning case. I pray the jury is not distracted by the theatrics of the defence.

But there were a lot of rape myths aired—like references to drugs they attest Kelly Johnson took decades earlier—all these diversions. I hope the jury is not biased and sees it as distraction.

READ MORE: Bill Cosby’s accusers are already under attack at his trial

Q: What’s your mood this morning?

A: I slept five hours; I feel invigorated and hopeful. The strongest testimony to that in court is when Cosby passes by me within a foot or two.

A: No. I feel he’s been disempowered. I’m not afraid anymore. I am able to say, “You have no power over me.” And that was powerful. Back in February 1992, he had said to me, “As far as I’m concerned, you’re dead, Bernard, you don’t exist.” I had threatened to file a report with the police. He said he would “erase me” and that doing so would have serious consequences. I was suicidal for a long time.

Q: The jury can’t take into their considerations the more than 60 women who have reported similar sexual assaults by Cosby. Do you think the jury got a sense of an M.O. or of grooming from the two accounts in court?

A: In my case, he knew I didn’t drink alcohol or take any drugs. So he put something in apple cider. Andrea didn’t know what she was taking. She would never take prescription drugs. She’s all about health. She tells my kids not to use the microwave.

Q: What do you make of the length of deliberations?

A: It’s disappointing. I would speculate there’s a holdout. Whoever it is might be biased. I don’t know how anyone could listen to the strong case presented by the prosecution and decide anything other than “guilty.”