Could helping boys be the key to closing the STEM gap?

Peter Shawn Taylor: The gender gap in science and technology graduates is a persistent problem. New research suggests we may be approaching it all wrong. 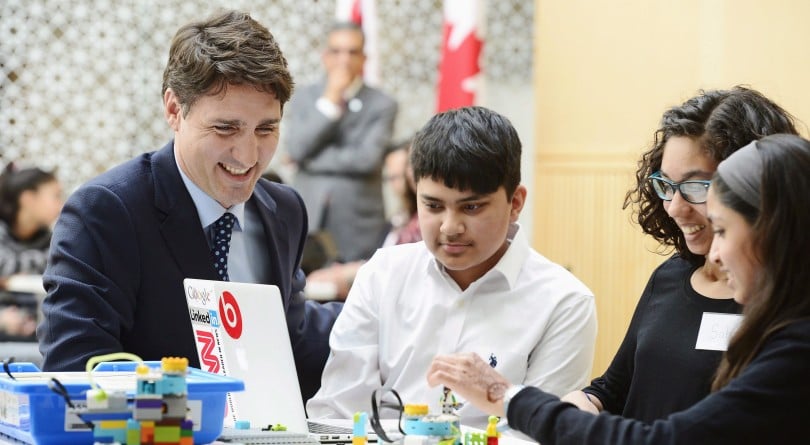 What if the low proportion of women studying STEM subjects in university has nothing to do with systemic discrimination, entrenched gender stereotypes or a dominant patriarchy? And what if fixing it requires offering boys—rather than girls—more help and encouragement in school? Would Canada still be interested in closing the gap?

The gender gap in STEM graduates is frequently held to be a substantial and pressing national problem. Last year’s federal budget noted with concern that “young men account for two-thirds of post-secondary graduates in Science, Technology, Engineering and Mathematics (STEM).” In engineering and computer science, the gap is wider still. This results in “less gender diversity across occupations and … limited career opportunities for women.”

To rectify this perceived injustice, governments, universities and numerous other organizations now bombard young girls with extra assistance and support meant to encourage them to study science in high school and university, including girls-only scholarships, specialized summer camps, contests, mentoring programs and numerous other outreach efforts. And yet the numbers barely budge. The University of Waterloo, arguably Canada’s premier science university, has adopted all the above strategies and yet women still comprise less than one-quarter of its engineering graduates.

But maybe these campaigns are focused on the wrong gender. Recent research suggests if we really want to get more women into the hard sciences, we need to pay more attention to how boys are doing in every other subject.

The persistence of the STEM gender gap, given all the attention it receives, remains a paradox for researchers. The OECD’s ranking of international high school students using its Programme for International Student Assessment (PISA) tests in math, science and reading across 67 countries shows there’s no statistical difference between girls and boys in science knowledge; based on latent ability and performance both genders should be equally attracted to these areas.

READ MORE: How engineers are engineering change on the gender gap

However, an intriguing paper recently published in the academic journal Psychological Science argues absolute ability is the wrong place to look for explanations. Rather, we should be focussing on the relative strengths of individual students. And here the genders differ quite a bit.

In almost every country (including Canada), researchers Gijsbert Stoet and David Geary found boys perform substantially better in PISA on math and science than they do in reading. Girls display a more even distribution of skills, but reading is a notable area of relative strength. (Reading was the strongest subject for 51 per cent of all girls, but only for 20 per cent of boys.) This relative strength by gender is “near universal” across all countries, the researchers observes. In some countries girls actually out-score boys in science as well as reading, but show substantially greater dominance in reading. This matters, Stoet and Geary claim, because when it comes time to choose a major, students tend to make decisions based on perceptions of their own particular strengths—what is my best subject?

For girls, who display broad scholastic abilities and generally better overall study habits, that best subject can be almost anything. Boys, on the other hand, have a far narrower range of strengths to choose from. STEM is about all they’re really good at. In follow-up questions that inquired about the level of enjoyment derived from studying different subjects, the researchers further reported that “boys often expressed … more joy in science, and a broader interest in science than did girls.” Science makes boys happier than it does girls.

Stoet and Geary also tackle a second gender-equity STEM paradox. Countries perceived to have a greater commitment to gender equality tend to produce fewer female STEM graduates. In the Nordic countries of Finland, Sweden and Norway, for example, women comprise only between one-fifth and one-quarter of all STEM graduates. Canada is only slightly higher. By contrast, more than a third of Indonesia’s STEM graduates are women. Albania is at 38 per cent. And according to the researcher’s data, Algeria is the most progressive country in the world with respect to gender equity in science education—over 40 per cent of its STEM graduates are female.

How is it that many poorer, Muslim-majority countries appear to have solved a problem that continues to confound western liberal nations? The answer, Stoet and Geary propose, may be found in the generous welfare programs offered in Scandinavia and Canada. High levels of social security in these countries allow students to choose educational paths more closely aligned with their personal preferences, rather than those that earn the most money or carry the most prestige. “Less gender-equal countries have less secure and more difficult living conditions,” the researchers observe. As a result “a well-paying STEM career may appear to be an investment in a more secure future,” for female students with strong science skills in countries such as Indonesia, Albania and Algeria.

Given that girls already comprise a majority (sometimes an overwhelming majority) on Canadian campuses in social sciences, business, law, education, health care and numerous other areas, their proportionate absence from narrowly-defined STEM subjects now appears to be entirely rational. It is the product of a combination of their own personal strengths and preferences reinforced by the security of Canada’s social safety net. As such, there seems no urgent or compelling reason to interfere in these freely-made and predictable choices.

If, however, gender balance remains a social objective for pure equity reasons—we simply want to see more girls in STEM because that appears fairer and more just—then we need to face up to its most significant root cause: boys currently take up most of the space in STEM classrooms because it’s their only area of strength. Closing the gender gap in sciences will thus require helping boys do better in all other subjects.

A recent OECD brief summarizing Stoet and Geary’s recent work concludes that: “tackling boys’ underperformance in reading may be just as important to ensure greater representation of women in science careers as supporting girls’ performance in and attitudes towards STEM subjects.” To swing the balance in STEM, Canada needs to figure out how to improve boys’ performance in all high school subjects other than science, technology, engineering and math.

This could mean boys-only scholarships in non-science areas, boys-only summer camps, contests, special mentoring programs and the whole gamut of programs currently provided exclusively to girls in the name of boosting their presence in STEM. Achieving real gender equality means bringing boys’ performance in school up to the level of girls. It’s a big job. Is everyone ready?