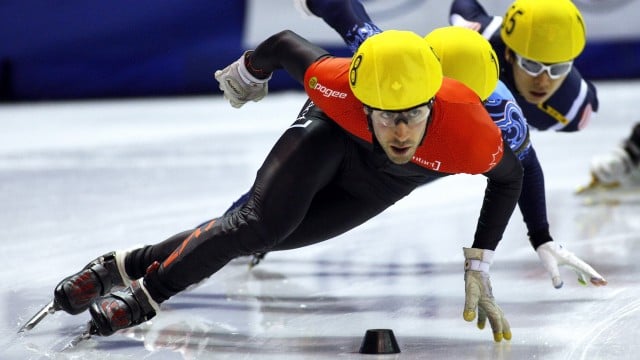 When Michael Gilday laces up his skates and glides across the ice at Sochi’s Iceberg Skating Palace in February, he’ll be making Olympic history. And right then, the biggest city in the Northwest Territories will go berserk.

Never before has a speed skater from Yellowknife qualified for the Games. And while the Yellowknife Speed Skating Club lays claim to being Canada’s oldest, having recently celebrated 35 years, Gilday is the club’s first athlete fast enough to have punched a ticket to the Winter Olympics.

“I’m super pumped,” Gilday says after a morning training session in Montreal, where he now lives and trains. He’s been skating full-time since he graduated high school in 2005. “The Olympics has always been the goal. As everything starts winding up here, we’re getting closer and closer. The excitement is really building.”

Gilday is part of the five-man relay team (it includes Charles Hamelin, Francois Hamelin, Charle Cournoyer and Olivier Jean, though four of them skate per race) that this year won world championship gold.

It’s the team depth that sets Canada apart, says Gilday. “A crazy fast lap time would be 8.2 or 8.3 seconds, and we have five guys that on any given day can do those lap times.” He also points to a strong training group in Montreal that allows the team to practise as if they’re in a four-team race. “When you see four guys on the line in an Olympic final or semifinal,” he says, “it’s because of the work of our entire training group.”

Gilday, the lone member of the relay team who doesn’t hail from Quebec, says his strength is his endurance. “If I do the best race I can, my two fastest exchanges are going to be my last two,” he says. “If I can be the guy that sets us up and puts us in a good position going into the final laps, it takes pressure off Charles, who’s normally our finisher.”

The short track speed skating season is done for the year and it doesn’t resume until the Games, so it’s hard training until then. Gilday and Co. will get Christmas day off, as well as the afternoon of the 24th and the morning of the 26th. “Harsh bosses,” he says, “but we’re harsh on ourselves, too. That’s what it takes, so we gotta do it.”

Gilday can’t wait for the Games to begin—but not because he expects it to be fun. “It’s the Olympic Games—you’re going there to win,” he says. “I’m looking forward to being in the Olympic atmosphere and soaking that up, using that as inspiration and motivation to have the best races of my life.”