He was a born athlete, health-conscious and always on the run. The family farm was his life and he rarely took a day off. 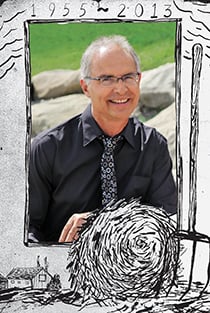 Craig Douglas Grunert was born in Regina on Aug. 11, 1955. He and his fraternal twin brother, Curtis, spent their first three months in a local orphanage, until Gerald and Ella Grunert adopted them in November that same year. The Grunerts brought the brothers back to their home in Yorkton—a small Saskatchewan city near the Manitoba border. Craig was agile from birth. “He would climb out of his crib,” says Craig’s wife, Sherry—recalling a family story—“and go over to Curtis’s crib, steal his bottle, drink it and go back over to his own crib.” When the boys were two years old, their parents moved to a farm about 12 km outside Yorkton, in an area known as Orcadia. Life on the farm was hard. “Until they were about six, they didn’t have running water,” says Sherry. “They had to get wood to heat the house.” Craig, a slender boy with dark hair, milked cows, and fished. “We trapped mink, muskrat and beaver,” says his brother, Curtis. “We had responsibilities, but it was a good life, a wholesome life.”

Craig excelled at everything physical. Although bright in school—math, especially—he was most interested in athletics. He ran, he curled, he played football and later, broomball, his favourite sport. “Craig could win any race,” says Sherry. “He could pick up a golf club once and play golf.” Annoyed at the prospect of having to wear glasses in elementary school, he memorized an optometrist’s eye chart in order to fool his doctor into believing he didn’t need them, so he could sign up for boxing, spectacles-free. “When he had his first match, he couldn’t see,” she says. “That was the end of his boxing career.” He was also extremely health-conscious. “He ran everywhere,” says Grant Wood, a childhood friend of the Grunert brothers. “He never walked from one side of the yard to the other.” He ate healthy food and rarely drank alcohol. Later in life, says Curtis, “he would brush his teeth so much, he had to see a dental surgeon.”

After high school, Craig studied accounting in Moose Jaw. He took an accounting job at a Saskatoon firm shortly after—where he worked for two years until his mother, Ella, died suddenly from a brain aneurysm. “She died during harvest time,” says Sherry. After his mother’s passing, Craig moved back to the family farm. “Working in an office was no place for him,” says Curtis. “He loved farming, he loved the equipment,” says Grant. “He was a very smart operator.” The Grunert brothers helped their father run the family’s grain and dairy farm, and Craig purchased some land nearby, on which he would raise feeder hogs and beef cattle. “He was very particular. For three years, he didn’t have a day off. Some people nicknamed him Superman,” says Sherry. He never complained, and he always lent a helping hand to anyone in need. Farming was his life.

But Craig also loved to travel. Almost every dollar he made went “back into the farm,” says Sherry, but he always made sure to save some for his annual trip to a more forgiving climate: Australia, in particular. At 39, while visiting a friend in Kamloops, B.C., he walked into Sherry’s travel agency, looking to book a trip somewhere warm. They hit it off right away and began dating long-distance. He would sometimes drive 18 hours from Yorkton to Kamloops and show up unannounced at Sherry’s doorstep. “He was very good with my two-year-old son, Justin,” says Sherry, a single mom at the time. Two years later, in 1996, Craig and Sherry were married.  “I sold my travel agency and moved out here [to Yorkton], to a different life.” They had a baby, a little girl named Caleigh.

The Grunerts were happy. Craig was an attentive father; he would take his kids to sporting events and show them how to use the equipment on the farm. And he remained healthy as ever, well into his 50s. “Craig was always on a quest to find the best whole-wheat bread,” says Sherry.

In April, the family took a trip to Cambodia with their church group, where they volunteered in an orphanage. “The past two years, things were getting better for Craig,” says Sherry. “He didn’t have to work quite so many hours on the farm. He was spending more time with his family.” On April 18, 12 days after the Grunerts had returned home from Cambodia, Craig woke up early to load a truck with canola. When he noticed the grain was struggling to pass through the auger, he climbed into the grain bin to investigate and never surfaced. “That’s where he passed away,” says Sherry. “Inside the grain bin of canola.” He was 57.