Crowns and frowns: The royal winners and losers of 2016

Some soared, some crashed, and one royal couple made both lists

William and Kate: Everything the couple does generates headlines, which they use to promote social causes such as Heads Together, a joint effort between their foundation and eight innovative charity partners to end the stigma around mental health and provide help for those affected.

Oh, and in case you forgot, they have two very, very cute children. A picture of Prince George very comfortably greeting Barack Obama at Kensington Palace went viral. “Even some foreign leaders, they’ve been looking ahead, anticipating my departure,” the outgoing American president later deadpanned at the White House Correspondents’ Dinner. “Last week, Prince George showed up to our meeting in his bathrobe. That was a slap in the face. A clear breach of protocol.”

Prince George meets The President and First Lady of the United States pic.twitter.com/HZxelhSSr4

Queen Elizabeth II and Prince Philip: She’s the oldest reigning British monarch; he’s her most loyal and trusted sidekick. He still hauls kids over security barriers so they can present flowers to the Queen; she reminds everyone why a monarchy can be a very, very, very good thing.

Prince Harry: Now that he’s out of the military, he’s determined to do his own thing, his own way. He spent months in Africa out of the spotlight working on his wildlife and children’s charities. And when his actress girlfriend, Meghan Markle, was the subject of some nasty tabloid columns and headlines, he ditched the usual “never comment” royal media policy and published an emotional appeal asking everyone to back off. So what if royal officials were left with egg on their faces when he flitted off to Toronto to visit Markle at the end of his official Caribbean tour after they’d expressly told the media he was going straight back to London? His individualistic style breaks precedent. But will it work?

The Maxima and Mathilde road show: The queens of the Netherlands (Maxima) and Mathilde (Belgium) illustrate that it’s possible to have a lot of fun while still being regal, especially with a friend who knows the travails and tribulations of being a queen. Last year, they wore coordinated blue and orange outfits (by the designer Natan) as they laughed and joked their way through an outdoor sculpture exhibition in The Hague. This year, it was a state visit by the Belgians to the Netherlands. One can only hope they continue with their double act.

Princess Anne: She’s been such a stalwart of the royal family, quietly performing a seemingly insane number of royal duties, often well away from media attention, that her role as a diamond-studded monarchical asset is often overlooked. The intimate portrait by Annie Leibovitz of Queen Elizabeth II and her only daughter, released for the monarch’s 90th birthday, was a study of their oft-ignored, close relationship. Then, in September, the 66-year-old princess did the unimaginable, and was forced to cancel a series of engagements, including an overseas tour because of a chest infection. The resultant headlines, and concern, showed a deep affection for Anne.

William and Kate: They garner fawning headlines, but that exposure can turn negative, quickly. Early in 2016, William was the subject of a withering attack over his work ethic (or, rather, lack of duty). The nickname “Work-shy William” seems to have stuck, as the couple are at the bottom of the royal engagement tables. And after five years in the Windsor clan, Kate’s workload is well below that of recent royal brides. But at least she’s always well-prepared: In Vancouver, William admitted he hadn’t read his briefing papers. Who wouldn’t enjoy living in luxurious privacy in Norfolk, with a huge pad at Kensington Palace when London beckons? But sooner or later, the 35-year-olds will have to step up. They can’t always expect senior citizens to do most of the royal work. 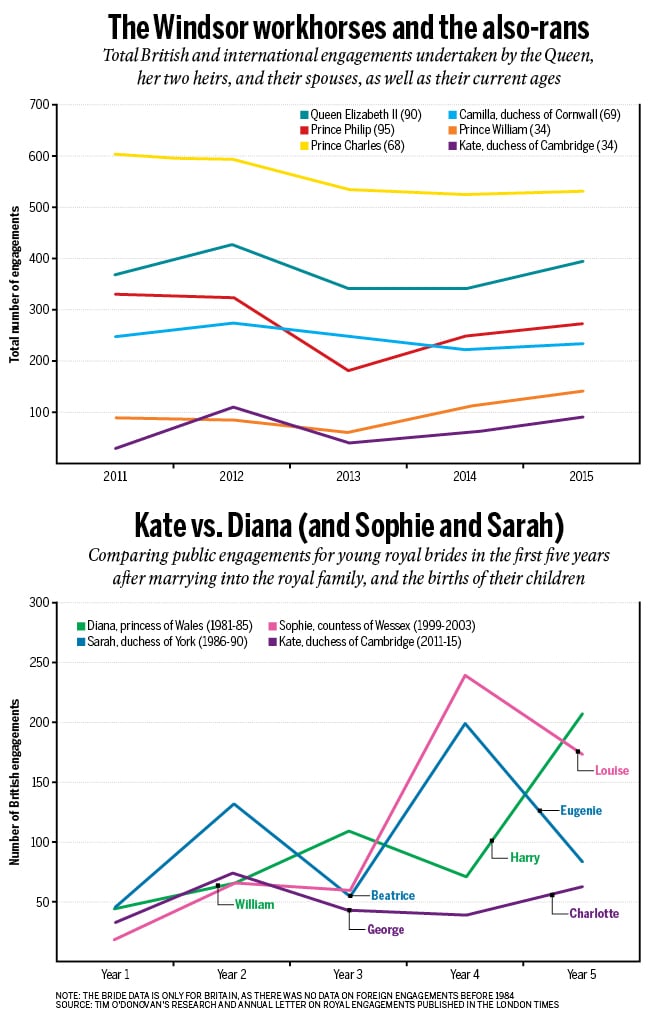 The Yorks: It’s hard to know where to start. Beatrice split with her longtime boyfriend. She can’t find a permanent job, but spends lots and lots of time on luxurious vacations, as does her sister, Eugenie. The name of Sarah, duchess of York, appeared in the Panama Papers, which exposed the wealthy elites’ use of tax havens. Then, after reports that Prince Charles had rejected his brother’s plea that Beatrice and Eugenie be given full-time royal roles, Andrew published a diatribe against media “innuendos.” Plus ça change…

Emperor Akihito: In a public statement to his nation, the Japanese emperor, 82, couldn’t say the word “abdicate” but it was clear that he was asking to be relieved of his duties. “When I consider that my fitness level is gradually declining, I am worried that it may become difficult for me to carry out my duties as the symbol of the state with my whole being, as I have done until now,” he said. Unfortunately the decision belongs to the government. So Akihito has to wait, and wonder.

King Felipe and Queen Letizia: Their high-profile state visit to Britain was postponed by more of the political drama that has enveloped Spain for more than a year. If that weren’t enough stress, the king is estranged from his sister, Infanta Cristina, on trial for accessory of tax evasion along with her husband. A verdict is expected in March 2017.