She was a star runner with a fiercely competitive streak— she’d arm wrestle anyone. Climbing was her latest passion. 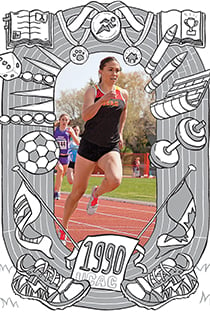 Danielle Kendall was born Oct. 24, 1990, in Calgary, “feet first” as her father Gordon, an Internet protocol specialist, puts it. Her mother, Noreen, a dental hygienist, would need a Caesarean section to deliver Danielle, the first of the couple’s three children.

As a little girl, growing up on the family’s 2.6 acre property in Springbank, just west of Calgary, Danielle was always very determined, even bossy at times. “Even when we were little, we’d always play her games,” says her sister Allison. She was academically inclined, even as a toddler. When her grandparents visited to take the kids tobogganing, Danielle, in her puffy snowsuit and just six or seven years old, insisted on bringing her school workbooks. “That tells you how organized she was, even then,” says Noreen.

It was in Grade 5 that the gangly girl born feet first found her legs. Her parents put her in soccer and discovered she was fast as blazes. Her mother, a figure skater in her younger days, also thought skating was a good sport for Danielle. “But at about Grade 8, she came home and said to me, ‘I can’t do this anymore!’ She hated it. It was too girly, I guess. She said ‘I want to run.’ ”

The Kendalls were a close-knit and competitive family. “Whenever she and I would get mad at each other,” recalls Allison, “we would rip the head off each other’s Barbie dolls. Everything was a competition to her.” One blustery, snowy day, Allison, then in Grade 9 and playing soccer on the Springbank Community High School team, faced off against Danielle, in Grade 12 and on the Cochrane High School team, for the divisional championships. (Danielle had decided to attend Cochrane for its French program). Noreen and Gordon carefully positioned themselves at the midway point in the field, cheering both sides. With 20 minutes left in the game, “it was zero-zero, because nobody could score in that weather,” says Gordon. “And then Danielle scored the winning goal.” The parents had to congratulate one daughter, console the other.

After high school, Danielle went to the University of Calgary, where she became a star sprinter on the Dinos track team. She trained hard, in any kind of weather. Once, at home, she was outside pumping iron in weather so bitterly cold that her barbell snapped in her hand. She also loved to arm wrestle. “She had this vein in her right bicep, that would go across just like this,” says Allison, outlining a V-shape. “We would call it her power V.” She would arm wrestle anyone, male or female. “And she beat me,” admits Allison.

Danielle “had a giving side to her as well,” says Gordon. She volunteered at Calgary’s Bethany Care, where she regularly played backgammon with an elderly, blind quadriplegic woman named Lillian. One day Danielle went to visit Lillian only to find she had passed away. It was her first encounter with death. “She was very saddened,” says Gordon.

It was her father that Danielle most took after. She had his yearning for travel and his playful sense of humour. Though a serious student, she could party and laugh, says her brother, Graeme. When she was at home, in those rare moments she wasn’t busy with sports or school, she loved to show him goofy videos on YouTube.

When Danielle was 15, her father had taken her climbing up the 3,544-m Mt. Temple in Banff National Park. It was her first really big hike. “After she out-hiked me up Mt. Temple,” says Gordon, “she just kind of left me behind and started taking other friends” up mountains in Alberta and B.C.

Climbing got into her blood. On her bookshelf, Danielle collected a small rock from each peak she summited, writing with a Sharpie the climb date and who made it to the top with her. There are 24 on the shelf. “We always worried, but we knew we could never stop her climbing,” says her mother.

At the beginning of May, just two days after she completed her final year of university, Danielle set off on her first big trip abroad, choosing South America (she wanted to go somewhere her dad had never been). While there, she heard about Cotopaxi, Ecuador’s second-highest summit at 5,897 m. Despite her mother’s admonitions to do just a countryside trek instead, she decided to climb it. In darkness at 3:30 a.m. on June 2, as her climbing group neared the summit on the glacial peak, a car-sized chunk of a serac, an overhanging wedge of ice and snow, broke off, smashing into her. She died soon after, in the guide’s arms.