An adventurer and avid reader, he was drawn to danger. He hoped to be a war correspondent and travel the world. 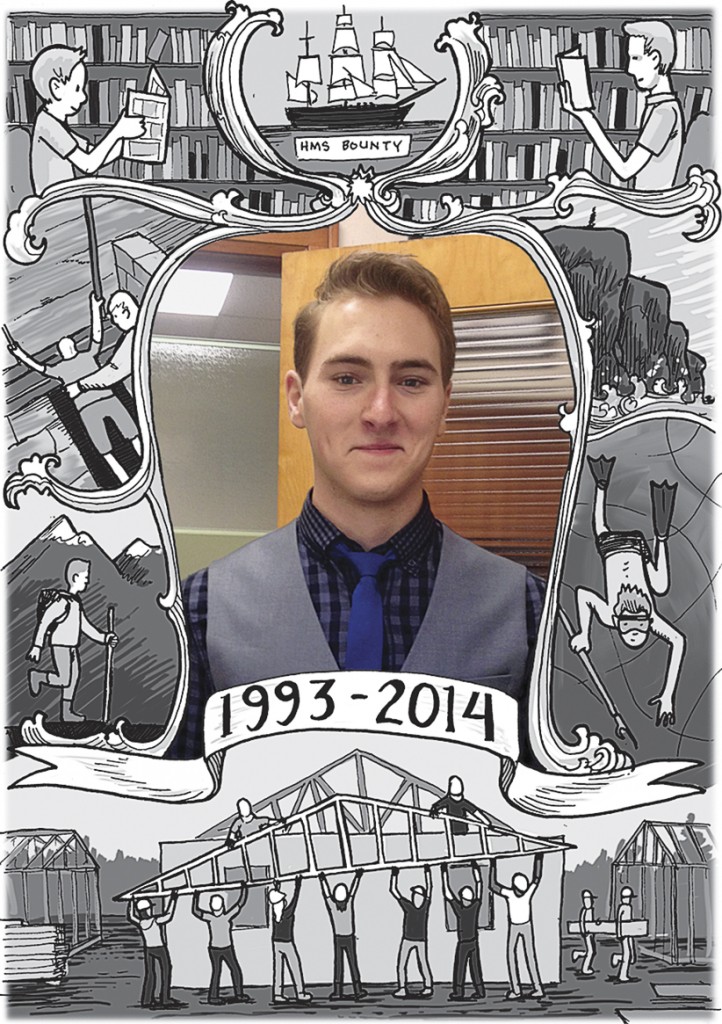 David Edward Frenette was born on Dec. 28, 1993, in Thunder Bay, Ont., to Liana, a teacher, and Rob, a civil engineer. He was the youngest of three children and arrived five weeks premature, but “healthy and strapping—just anxious to get on with life,” Rob recalls.

When David was a baby, his parents bought a small construction-materials and analytical-testing lab. Along with David and his older siblings, Joe and Sarah, the business was the “fourth element” of the family. As their children grew, the two-person operation matured into a thriving engineering consulting firm. “We took one of those smart risks that defines who we are and is amplified by the way we live our lives, our children included,” Rob says.

The Frenettes were bound by their sense of adventure. Growing up, the siblings would clamber as high as they could up 30-m pine trees near their home, and scuba dive near the family’s cabin on Rainy Lake, where no electricity meant a no-electronics rule. It was there that David began to read avidly, an interest that grew throughout his childhood, to the point where he consumed three or four books a week, working his way up from Archie comics to The Great Gatsby. As a teenager, David became the keeper of the family’s home library, housed in three bookcases with shelves stacked two or three rows deep. “He is responsible for purchasing probably 70 to 80 per cent of those books and reading each and every one,” Joe says.

Rob and Liana prioritized travel to expose their children to life beyond northern Ontario, taking the kids on trips through England, France, Hong Kong, Japan and Australia. “I thought maybe they would get bored of it, but no, they just wanted to go farther,” Liana says. By age 17, David had hiked the Alberta Rockies, kissed the Blarney Stone in Ireland and, along with Sarah, become the youngest person to sail unaccompanied by an adult on the HMS Bounty from Thunder Bay to Green Bay, Wis. A born swimmer, David couldn’t resist taking a dive off the ship’s jib boom.

In Grade 12 David joined the Lake Superior Scottish Regiment Army Reserves. “He was drawn to danger, no doubt about it,” Rob says. He relished running drills and he paid in push-ups for his inability to keep a straight face: “His biggest challenge was learning how to not smile,” adds Rob.

After graduating in 2011, David signed up for an online journalism course. He could have completed it from Thunder Bay; instead, he moved to Hawaii for six months, diving from the Ka Lae cliffs and living cheaply to a point that mirrored Castaway: “Whenever they ran out of food, they’d just go and spear fish,” Rob says.

After returning home, David worked for the family firm. He also volunteered for Habitat for Humanity. “He had such a huge heart, always trying to associate with the underdog and make them feel better, crack them up with a smile,” Rob says. An ankle injury quashed David’s dream of joining the military, but journalism and photography piqued his wanderlust and love of language. “He wanted to travel to every country in the world,” Rob says. “Through travel, through literature, through journalism, he felt he would never be bored.”

In January, David took classes at Confederation College to upgrade his credits. Drawn to big-city life, he then enrolled in Humber College’s journalism program in Toronto. He moved to the city on Aug. 22, renting a condo overlooking Lake Ontario and the gleaming white steel ribs of the Humber Bay Arch Bridge. Due to start classes on Sept. 3, David told his parents he wanted to move to New York and eventually become a war correspondent. “He would have, I’m sure, gladly backpacked around the world and slept in hostels, hovels, beaches or park benches, just to get that experience,” Rob says.

On Aug. 26, while cycling along the waterfront in his new neighbourhood, David spotted two young men jumping from the Humber Bridge at the mouth of the Humber River. Having dived from much more intimidating cliffs in Hawaii and Australia, David likely didn’t hesitate as he parked his bike, took off his shirt and readied himself on the edge of the pedestrian pathway. Onlookers watched as David dove from the bridge and struck his head on something hard as he plunged into the water. He never regained consciousness and died in hospital on Aug. 30, with his family by his side. He was 20.