Dear Mike Sloan: 'You were a teacher offering a great gift'

Scott Simmie tells Mike Sloan, a friend who wrote about his medically assisted death on Twitter as @mikelondoncan, that he changed people’s lives 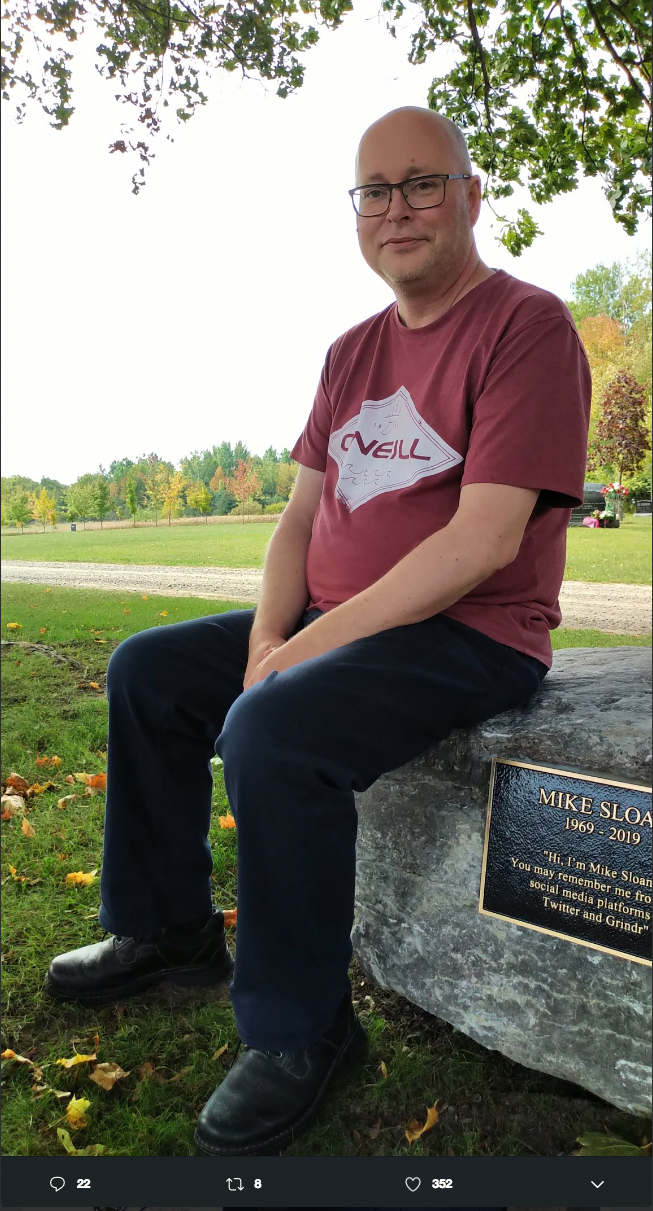 You’ll be pleased to hear that your funeral was awesome. More than 100 of us virtual mourners tuned into the live stream from the O’Neil Funeral Home in London, Ont.

There were plenty of laughs, stories you would have really enjoyed. Tears, too, like at any good funeral. Your friend Bob, who held your hand when the doctor gave you the series of injections that would stop your heart, described your medically assisted death. Even his recounting had some humour. Mostly, though—and especially when he described the honour of simply holding your hand—there was tenderness and love. It really was moving, Mike.

We all knew this day was coming—you, more than anyone. After all, when you were diagnosed last February with a rare anaplastic thyroid cancer, you were told you’d be dead before 2019 was over.

Not many of us get to write our own epitaph, much less get a chance to sit on our own tombstone. You did both. And that inscription? Well, it’s so you:

You may remember me from such

I guess if you could have changed one thing on that, it would have been the year. Because you outlived the timeline of that prognosis. And, when you realized you’d likely make it to 2020, you had fun with it. As you joked on Twitter on Dec. 18: If you think you have problems, well, I’m obligated to die in 2019.

This is so darkly funny, wrote a follower named Pam Muster. Sending you love, Mike Sloan. Your tombstone should just say, “a good human being.” Agreed, Pam.

If you need any proof, consider that donations have continued to land on your GoFundMe page, which you launched last October for the YOU 340 Project in London—a place for at-risk youth who need a place to call home. You are well over your $25,000 goal. It’s a project that clearly, as a survivor yourself of mental health issues and poverty, was close to your heart, and you made it happen: I am entering my final weeks of my odyssey with cancer, you wrote on that GoFundMe in late October. And in losing my voice, I am surprised to have found an even stronger one. So very true, Mike.

Like thousands of others, I found you on Twitter. I consider myself fortunate, because back in November—when you were looking for leads on an executor—I dropped you a note. I knew someone who might fit the bill. It turned out you remembered some of the mental health writing I’d done so long ago. You were immediately open in those direct messages; so honest. There seemed to be an urgency, which I understand better now—no need for small talk when you’re dying.

“I’m actually intensely private,” you confided. “I’m shocked at how my rather insignificant story has caught on.”

Toward the end, it was clear, between pneumonia and cancer, things weren’t going well. Your posts weren’t as frequent, your symptoms worsening.

Jan. 18: When it’s getting too frightening to drink liquids because they may simply spit back up or choke me, you know, let’s be honest about choices here. #endoflife

By the time you died on Jan. 20, you’d picked up something like 13,200 followers. Many enjoyed your dry wit and optimism in the face of such adversity, while others struggling with cancer or considering medical assistance in dying saw you as something of a beacon.

I tried, one night, to tell you what your story meant to me: “Most of us who are not facing what you face, we go through life. And we have s–tty little things happen that we let bug us (or at least I do),” I wrote. “And then along comes Mike Sloan. And this guy has way more on his plate than we can imagine. And yet he doesn’t complain. He enjoys little things still. He sees a bigger picture that we cannot see . . .”

I realized, as I messaged, you were much more than someone with an interesting story on Twitter—more than someone being brave in the face of death. You were a teacher offering a great gift. Even your final tweet, the meaning of which is so clear, was crafted with precision. You didn’t want us to worry. And you didn’t want our pity. Jan. 20: Just stay tuned all . . . no big deal though.

Stay tuned. For the announcement, via your friend, that you were gone. My Twitter feed feels strangely empty in your absence, @mikelondoncan. But I am grateful I followed you—and that you shared so much, with so many. When something small threatens to piss me off, I’ll keep you in mind and try to shake it. After all, life is so much bigger than that. And—as you made so abundantly clear—if we’re not living, we’re dying.

Thanks, Mike. Like thousands of others, I miss you.

This article appears in print in the March 2020 issue of Maclean’s magazine with the headline, “Dear Mike …” Subscribe to the monthly print magazine here.