Death and distrust in Alberta

Jacob Sansom and Morris Cardinal went on a hunting trip and never came back. The killing of the two Métis-Cree men deepens Indigenous peoples’ sense that their lives are less valued. 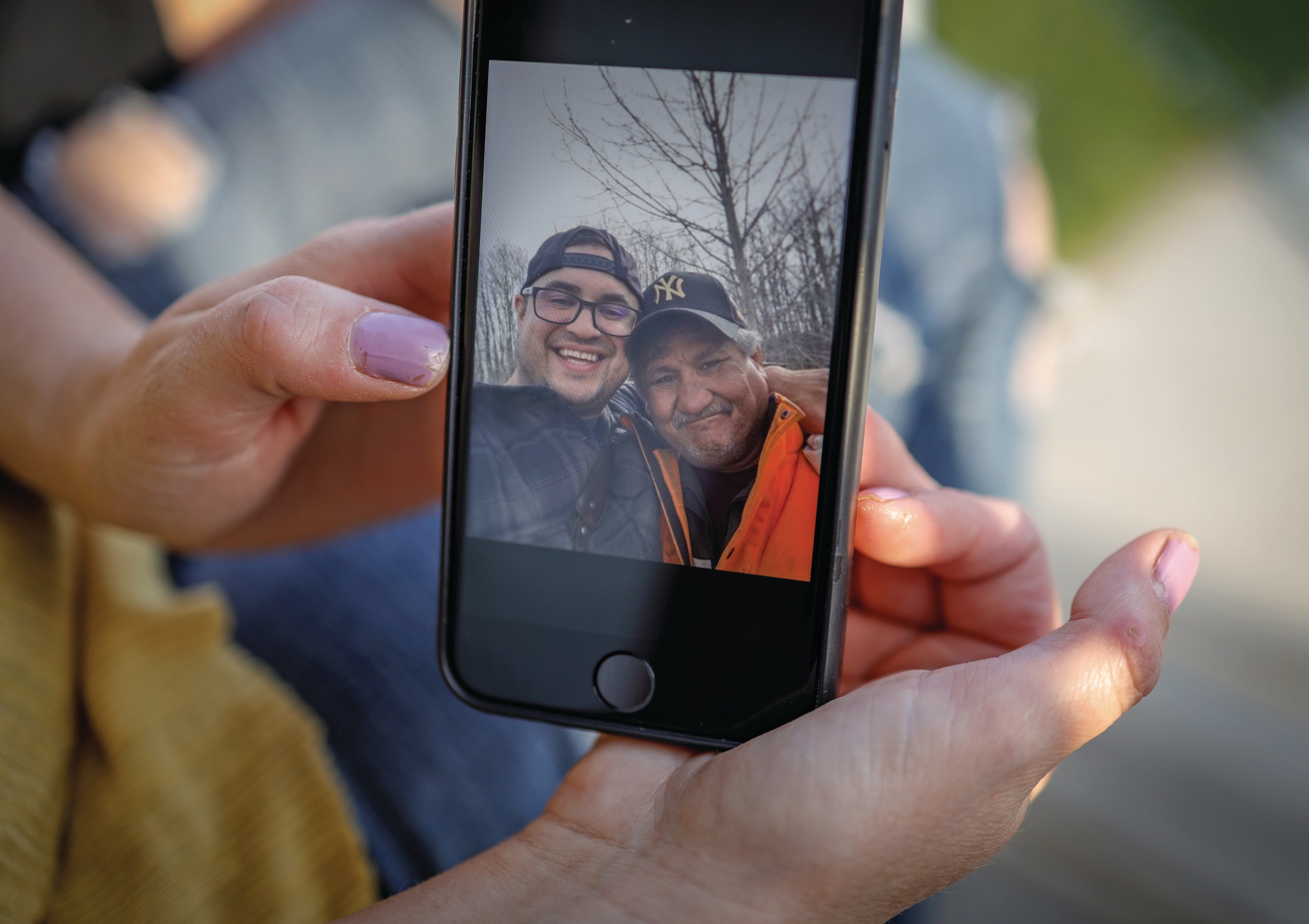 On a frigid Saturday in late March, Jacob Sansom and his uncle, Morris Cardinal, were out hunting a few hours northeast of Edmonton. The weather was veering between winter and spring, the snow firm but stained with mud. The trip was not unusual for the two Métis-Cree men. They’d made the journey many times, says Sansom’s wife, Sarah, distributing the meat they’d taken to Elders in their community: “They’d make sure everyone’s freezers were stocked.”

That day, Cardinal, 57, and Sansom, 39, were scouring the woods near Seibert Lake for moose. Sansom, who lived in Nobleford in southern Alberta, had just lost his job as a contractor at Suncor due to the COVID-19 pandemic, and was eager to visit family near Bonnyville, where he grew up, and to hunt with his uncle Morris. 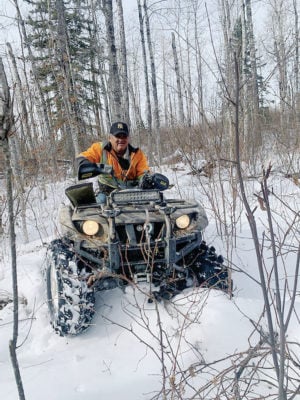 Morris Cardinal worked as a hunting guide. Seen here on his beloved quad near Seibert Lake, AB on the day he was killed. (Courtesy of Gina Levasseur)

In a series of texts to his wife, who remained in southern Alberta with their three children, Sansom detailed bits and pieces of what would be the final day of his life. He sent a good-morning message. Then, when Sansom and Cardinal shot a moose, he sent her pictures of the game. Later still, Cardinal and his nephew posed for a selfie—Sansom flashing a toothy grin while Cardinal beamed from ear to ear. “You’d think that for somebody that hunted as much as he did, the novelty of shooting a moose would wear off,” Sarah says. “But it didn’t with them, because they were like, ‘We get to feed people.’ ”

That photo would make its way across Canada beneath news headlines after Cardinal’s and Sansom’s bodies were discovered the following day with gunshot wounds. The men lay next to Sansom’s black pickup truck on a road near the village of Glendon, about 215 km northeast of Edmonton, for seven hours before a passerby spotted them at 4 a.m. The victims’ families would not be notified until later that morning.

RCMP have since arrested two men from the Glendon area—31-year-old Anthony Bilodeau and his 56-year-old father, Roger—and charged both with second-degree murder. The two have been denied bail and are to be tried together.

The slaying of the two hunters made only a brief impression outside of Alberta as the country grappled with the onset of COVID-19. But for Indigenous and Métis people on the rural Prairies, it has aggravated traumas from past killings—not least that of Colten Boushie, the 22-year-old Cree man shot to death on a Saskatchewan farm in 2016. For many, the deaths reinforced the sense that, in a region rife with racial tensions, their lives are valued less than those of their white neighbours.

More specifically, activists say, the case has rekindled a fraught history of disagreement over land use and hunting rights—a subject of ongoing debate that has played out in both court cases and political decision-making at the provincial level. As recently as last year, the province expanded Métis hunting areas, acting on a 2003 Supreme Court decision. The move was met with criticism from local wildlife groups who feared it would lead to over-hunting in some areas, and deepened resentment among some residents who don’t see why Métis should have special hunting rights.

READ: How this Indigenous community enjoyed a rare caribou feast

What role such tensions might have played in Cardinal’s and Sansom’s deaths remains unclear, with a trial months or possibly years away. What is known, according to Sarah Sansom, is that her husband and Cardinal were at a family member’s home near Glendon that evening, dropping off the meat from their hunt and staying for about three hours. Sansom called his wife at 9:28 p.m. before he and his uncle began driving to his mother’s house near Moose Lake, just outside of Bonnyville.

Sansom’s two older children were staying the night with their grandmother, and he was excited to head there to cuddle with them, Sarah says. “I love you, I’ll call you when I get to my mom’s,” she recalls him saying. He texted her again at 9:36 p.m., she says, confirming he had left. Sarah replied, “Okay, I love you.” Her phone showed that he read that text. She sent another one a few minutes later. “Drive safe,” it said. That text, Sansom never read. 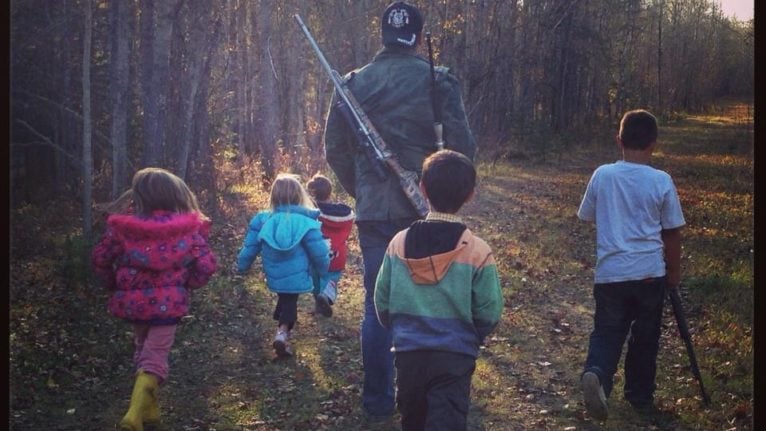 A Levasseur Sansom family photo from 2013 shows Jake’s “Wolf Pack” on a medicine walk. With him are his three kids Cierra, Addison and Daylen and nephews Tharyn and Nova. His sister was ill at the time, so they did a healing ceremony in the forest. Her medical problems resolved shortly afterwards. (Courtesy of Gina Levasseur and Sarah Sansom)

After piecing together events that followed, RCMP said in a statement that the two men were involved in a confrontation at a quiet intersection with two occupants of another vehicle, not far down the street from the house Sansom and Cardinal had just left. A heated argument erupted, followed by a physical altercation between the men and those in the other vehicle. Police allege that Anthony Bilodeau then drove up in a third vehicle and shot Sansom and Cardinal.

Bilodeau was arrested five days later, but it would be another two months before his father was arrested and charged. In August, the case was approved for direct indictment, meaning it is expected to go to trial, but a date has not yet been set.

Police have said the accused and the two Métis-Cree men did not know each other prior to their deaths, though media reports later revealed that the younger Bilodeau worked briefly with Sansom at the DLM Oilfield Enterprises workshop in Bonnyville—a surprise to Sarah, who says her husband never spoke of him. “I was his outlet to vent, so I would’ve heard the name,” Sarah says. “If he really knew Jake,” she adds, “why would he ever want to hurt him?”

Sansom was born in Bonnyville and had three siblings and three children. A former firefighter and mechanic, he had an affinity for creative writing, jiu-jitsu and Disney movies. “He was like a giant kid,” Sarah says. “Big and tough and strong with lots of powerful energy, but at the same time so childlike and innocent.” Cardinal was a skilled hunter and father of one daughter and three stepchildren, who was known for his generosity among his nieces, nephews and five grandchildren. 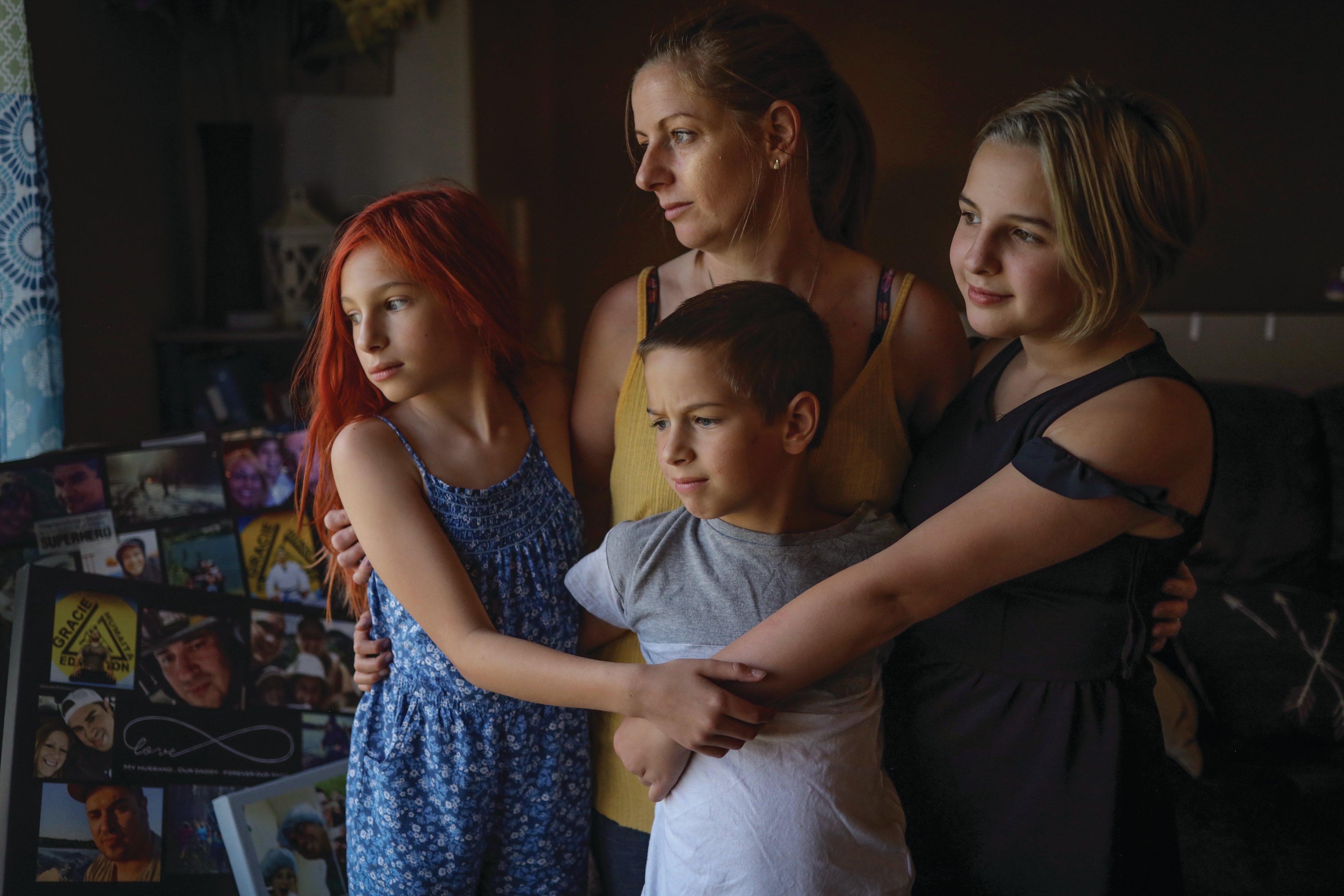 Sarah, who is not Indigenous, says her husband was no stranger to racist encounters throughout his life. A Métis man with Cree ancestry, Sansom had been bullied in school in rural Alberta, says Sarah, and passed up for jobs later in life because of it.

She’d witnessed some of that racism herself, she adds. Once, at a gas stop in Glendon with Sansom and Cardinal, a passerby approached her when she was briefly alone, worried by the sight of a white woman travelling with two men who looked Indigenous. “Excuse me, miss, do you need help? Are you in danger?” they asked, to her surprise. “Growing up in Calgary, I didn’t really see [the racism] until we started dating,” Sarah says.

The RCMP has said there is no evidence suggesting the killings were racially motivated, but a growing number of the family’s supporters have challenged that assertion, rallying outside the accused’s pretrial court hearings in Edmonton and the town of St. Paul. Some wear T-shirts reading, “Justice for Jake and Morris.” Activists point to a long history of incidents on the rural Prairies they say resulted from anti-Indigenous and anti-Métis discrimination on the part of both civilians and the RCMP—a legacy that has shaken their trust in the system to explore a potential racial dimension to the case.

One such critic is Melodie Bastien, a Blackfoot woman from Piikani First Nation near Lethbridge, who brought such grievances last year to Alberta’s first-ever anti-racism council, which is tasked with finding ways to break down systemic discrimination in the province. Bastien says that when she heard the news of Cardinal’s and Sansom’s death, she broke down.

“I thought of Colten Boushie, and I thought, is that what it is coming to? That our Indigenous people are being treated like we’re not even human?” Bastien says.

The Métis Nation of Alberta (MNA) is also keeping a watchful eye on the case, updating its membership as hearings unfold. For Audrey Poitras, the organization’s president, the deaths of Cardinal and Sansom should not be considered separately from their status as Métis who, hours before they were killed, were exercising their rights to hunt. Most of her work as president over the last 20 years, she says, has been fighting for the rights of Métis as Indigenous people in Canada: “For the longest time, our country and our province denied those rights.” 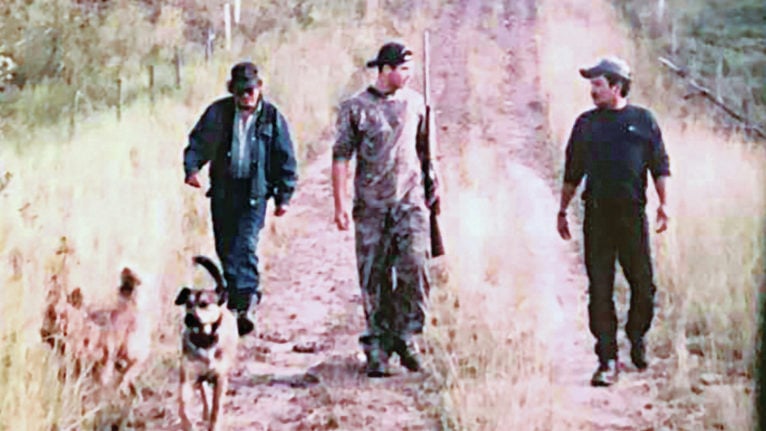 Indeed, many of them were only solidified during the last two decades. Canada’s Constitution was amended in 1982 to recognize Métis—people of mixed Indigenous and European ancestry. But their hunting rights weren’t defined until 2003, when two men fought charges in Sault Ste. Marie, Ont., for killing a moose out of season, winning their case before the Supreme Court of Canada.

Those rights were recognized by Alberta the following year in an agreement with the Métis, only to be cancelled in 2007 after an Alberta judge ruled the agreement was not enforceable in court. But the Métis pushed for reinstatement, reaching an agreement in early 2019 under then-premier Rachel Notley that allowed them to hunt in northern and central Alberta year-round.

Talks continue to include more areas under the agreement where Métis people have historically lived, including the province’s south. But Poitras says everyone concerned—not least the Alberta government—could do more to educate the public. “It would help a lot in breaking that cycle of ‘You don’t have rights, you can’t be here,’ ” she says, adding: “I certainly don’t ever want to see anything like this happen again.”

For now, the MNA is focusing on helping the families of Sansom and Cardinal with financial and legal support. And despite her family’s loss, Sarah Sansom says she’s determined to keep fighting for the fullest possible accounting of the killings, and the events that led to them. She has travelled with family to court hearings in Edmonton and St. Paul, speaking at rallies through tears about her love for her husband and the lives he and his uncle cherished. “I don’t want anyone to forget who my husband was, and who Morris was,” Sarah says. “They should be here.”

This article appears in print in the October 2020 issue of Maclean’s magazine with the headline, “Death and distrust in Alberta.” Subscribe to the monthly print magazine here.