A talented musician and golfer who loved the outdoors, she was a people person who beat cancer 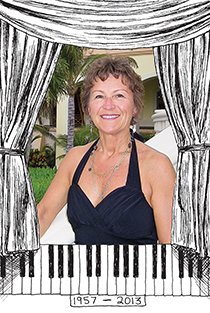 Deborah Marie Blais was born on Oct. 25, 1957, and grew up on a farm in Gilbert Plains, Man., to Ukrainian-Canadian parents, John, a farmer, and Stella, a nurse’s aide. The youngest of three sisters, Deborah sported Coke-bottle glasses that magnified her eyes. The thick rims were the only way she could see past her nose, but she wore them proudly and without complaint. As she grew up, she used contact lenses and eventually had laser surgery to correct her vision. Besides her smile, her eyes became her most recognizable feature.

As a child, Deborah had a flair for the dramatic. She would spend her summer days putting on plays and shooting Martians with chokecherry seeds in her backyard. She was never bored, and even found a way to transform her family’s chicken coop into a source of entertainment.“We would flip them on their backs and circle their faces with our fingers until they fell asleep,” says Liz Sydor, Deborah’s aunt and childhood friend. “She would just say, ‘Isn’t that amazing.’ ” When she wasn’t playing, Deborah would help her sisters around the farm. Despite her petite frame, she loved to build fences and clean up yards—anything to be outdoors.

When the CBC came to her country school, Sulphur Creek, to film a documentary, Deborah was captivated by the idea of performing for an audience. She later became an active member in the drama club at the town’s elementary school and won the biggest roles in all the plays. Music also become a passion. She took accordion lessons and went on to play the guitar, piano and organ. In high school, she became the “half” (or youngest member) of a local contemporary-pop group called Five and a Half that would perform around the town.

Inspired by her mother, Deborah decided to attend nursing school in Brandon, Man. She soon married Gerald Stoughton, her high school sweetheart and, in 1980, moved to Kimberley, B.C., where she got a job as a receptionist at the Kimberley Medical Clinic. Her marriage, though, ended after her second child was born.

In 1991, Deborah met Adrian Blais. Set up through friends, the two immediately fell in love. At first, they decided to take it slowly, with Deborah newly on her own and Adrian having lost his first wife to cancer only eight months before. “We didn’t want a relationship, but we found we couldn’t stay apart,” says Adrian. “She was so genuine. It was love at first sight.” They got married on July 10, 1999, blending together a family that included three of Adrian’s children and Deborah’s two.

Just as she did on the farm, Deb maintained an active outdoor lifestyle. She ran half-marathons, hiked and participated in local curling bonspiels. She was also a member of the local golf club. Many afternoons were spent putting with her friends and taking annual golf trips to nearby Creston or Cranbrook, or longer trips to Coral Springs, Fla. Deborah also continued with her music. She sang with the Steppin’ Out Dancers, a group of women who performed at local events and raised funds for the local theatre.

She worked at the Kimberley Medical Clinic for 32 years. She had a gift for dealing with people. “People were her food,” says her sister, Evelynne Murray. “She needed them as much as they needed her.” In 2011, she was honoured as the town’s employee of the year.

A year ago, Deborah was diagnosed with breast cancer. It was devastating news, which her friends say she faced head on. One night, while golfing with her friends, she asked them to feel the lump beneath her shirt, just so they would know what to keep an eye out for. She would tell people what it felt like to get chemotherapy and lose all her hair. “She didn’t stop participating and she was just as positive and uplifting as always,” says Tara De Paoli, a neighbour and close friend. “I didn’t really have any sense that she was particularly ill, even when she lost all of her hair.” Deborah had a mastectomy in June 2012, which, with chemo, completed her treatment.

Since February, Deborah had been working at the clinic part-time while she recovered her strength. On April 1, she returned to work full-time. Thirteen days later, while walking her son’s chocolate lab through the Bootleg Gap Golf Course near her house, Deborah went missing. She was found the following day by the RCMP. She had fallen into the icy water of one of the course’s ponds and drowned. She was 55.