Soccer chief pledges to restore trust in FIFA amid scandals 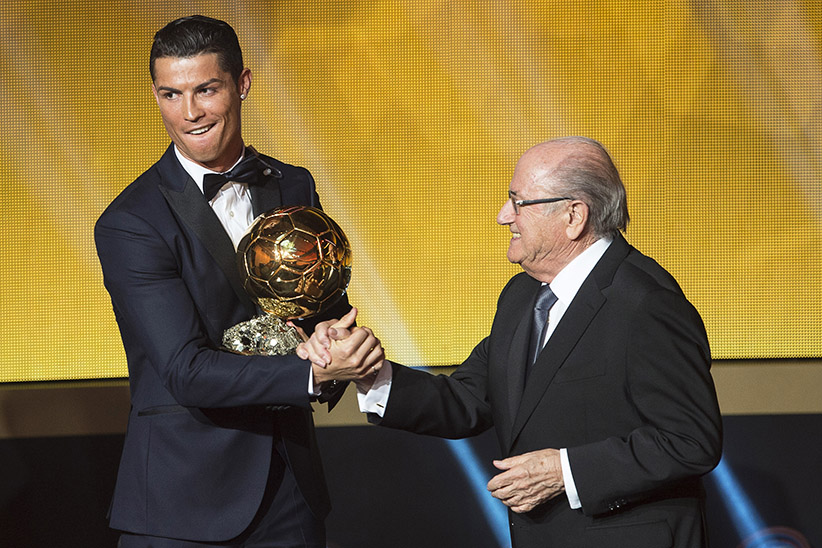 Big winner: Soccer star Cristiano Ronaldo wins the player of the year award for the second year and is congratulated by FIFA President Blatter in January 2015
Ennio Leanza/EPA

ZURICH — As defiant as ever, Sepp Blatter resisted calls to resign as FIFA president Thursday and deflected blame for the massive bribery and corruption scandal engulfing soccer’s world governing body.

“We, or I, cannot monitor everyone all of the time,” Blatter said in his first public remarks on the crisis that has further tainted his leadership on the eve of his bid for a fifth term as president.

The 79-year-old Blatter insisted he could restore trust in world soccer after a pair of corruption investigations brought “shame and humiliation” on his organization and the world’s most popular sport.

“We cannot allow the reputation of football and FIFA to be dragged through the mud any longer,” he said. “It has to stop here and now.”

Despite a tide of criticism and pressure on him to leave, Blatter is moving ahead with a presidential election Friday that is likely to bring him another four years in office as one of them most powerful men in sports.

“The events of yesterday have cast a long shadow over football,” he said, his voice shaky at times, in a speech to open FIFA’s two-day congress. “There can be no place for corruption of any kind.”

Blatter refused to back down after European soccer body UEFA demanded earlier Thursday that he quit following the latest — and most serious allegations — to discredit FIFA during his 17 years in office.

Platini met privately with Blatter and asked him to go.

“I am asking you to leave FIFA, to step down because you are giving FIFA a terrible image,” Platini said he told Blatter. “In terms of our image, it is not good at all and I am the first one to be disgusted by this.”

Blatter, who is expected to win Friday’s election against Prince Ali bin al-Hussein of Jordan, is coming under increasing scrutiny amid U.S. and Swiss federal investigations into high-level corruption tearing at FIFA.

A U.S. Justice Department investigation accused 14 international soccer officials or sports marketing executives of bribery, racketeering, fraud and money-laundering over two decades in connection with marketing rights worth hundreds of millions of dollars awarded for tournaments in North and South America. Seven officials — including two FIFA vice-presidents and members of its finance committee — remained in custody in Zurich on Thursday. Blatter was not implicated in the indictment.

In addition, Swiss officials are investigating the FIFA votes that sent the World Cup tournament to Russia in 2018 and to Qatar in 2022. Both decisions were marred by allegations of wrongdoing.

One of FIFA’s major sponsors, Visa, warned Thursday that it could pull out of its contract, which is worth at least $25 million a year through 2022.

Visa urged FIFA “to take swift and immediate steps to address these issues within its organization.”

While acknowledging that many people hold him responsible for FIFA’s tattered image, Blatter blamed the “actions of individuals” for harming the organization.

“If people want to do wrong, they will also try to hide it,” he said. “will not allow the actions of a few to destroy the hard work and integrity of the vast majority of those who work so hard for football.”

Blatter said the crisis could mark a “turning point” for FIFA to clean itself up.

“We will co-operate with all authorities to make sure anyone involved in wrongdoing, from top to bottom, is discovered and punished,” he said. “There can be no place for corruption of any kind. The next few months will not be easy for FIFA. I’m sure more bad news will follow. But it is necessary to begin to restore trust in our organization.”

Referring to Friday’s election, Blatter said: “We have the opportunity to begin on what will be a long and difficult road to rebuilding trust. We have lost their trust, at least a part of it, and we must now earn it back.”

The seven soccer officials, including Jeffrey Webb, president of the North American regional body known as CONCACAF, were arrested in a police raid on a luxury Zurich hotel early Wednesday. They are fighting extradition to the United States.

Defendants named in the indictment face up to 20 years in prison and their questioning could reveal further evidence that leads back to Blatter’s Zurich-based organization. Webb was a member of FIFA’s audit committee more than a decade ago.

Swiss investigators began questioning 10 of Blatter’s colleagues on the FIFA executive committee from 2010 that chose Russia and Qatar as the next two World Cup hosts.

French Foreign Minister Laurent Fabius said he supported the idea of delaying the FIFA election, given the current corruption scandal and told France-Inter radio, “There have been accusations of corruption for years.”

But Russian President Vladimir Putin came to the defence of Blatter and FIFA, accusing the U.S. of meddling in soccer’s internal affairs and hinting it was part of an attempt to take the 2018 World Cup away from his country.

“Our American counterparts, unfortunately, are using the same methods to reach their goals and illegally persecute people,” Putin said in a TV interview, comparing the case to those of whistleblowers Julian Assange and Edward Snowden.

“I have no doubt that this is yet another evident attempt to derail Mr. Blatter’s re-election as FIFA president,” Putin said.