A dedicated farmer and enthusiastic pilot, he never hesitated to do a favour, or offer a flight to spare a neighbour a long drive 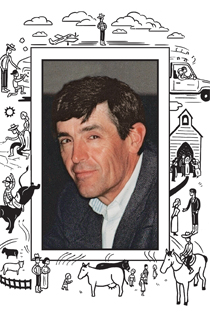 Dennis Hartley Loree was born in Nanton, Alta., on Feb. 9, 1953. “Denny,” as he was known, was the eldest child of Lloyd and Donna Loree, lifelong grain farmers and cattle ranchers.

From an early age Denny became a role model for his two brothers and two sisters. He was a hard worker, and a calm, responsible boy. The farm was his life. Riding the horses, seeding the ground, driving the trucks—he loved it all. By the time he was 11, he’d decided to buy his parents’ farm when they retired.

A tall and handsome teenager, Denny had a chiselled face and a fit, rope-thin body shaped by years of farm work and sports. He played lacrosse and rode bulls, though his rodeo career was short-lived: he couldn’t stand spurring the bulls, using his boots’ blunt, five-point steel spurs to help him hang on to the twisting, bucking animals. After high school, Denny got a diploma in agricultural production, bringing him one step closer to his dream of running the family farm.

One night, when he was 24, Denny put on a blue leisure suit and took a girl to a dance in Vulcan. But he spent the night talking to another girl, Joan Randle, from nearby Mossleigh. Joan couldn’t stand his suit, but was charmed by his intelligence and confidence. She fell in love immediately. Their first date was the Calgary Stampede. To make her happy, he took her on all the rides (later, he confessed they’d made him feel sick). Less than 12 months later, on July 22, 1978, they had a big church wedding in High River, in southwestern Alberta.

Together, he and Joan, who was also a farmer, bought Denny’s parents’ farm. The farmhouse was the only home he’d ever known. “We bought it,” says Joan, “then it didn’t rain for a decade.” It was a gruelling time for Prairie farmers; years of drought, crippling interest rates and competition from foreign markets drove many out of business. But Denny and Joan prevailed. “We always worked together, made all the farm’s decisions together,” she says. Denny, who’d taught Joan to drive all the equipment, worked from dawn to dusk, and never complained about the challenges they faced.

In 1983, Denny became a father, with the birth of Mackenzie, their perfect baby boy. He was their only child and became Denny’s little student, working the fields before he was 10. As a teenager, Mackenzie took up rodeoing. He was so good, Denny and Joan started taking weekends off—something they’d never done before—to drive Mackenzie to competitions. “We would get in the truck on Friday nights, crank up a Def Leppard tape, and go to the rodeo,” says Joan. “It was so much fun.”

Raised beneath the Prairies’ big skies, Denny had always been fascinated by flying. At 49, before he’d even earned his pilot’s licence, he bought his first plane, a Cherokee 150. Soon, he was flying once or twice a day, mostly to commute to a second farm he and Joan had bought in Mossleigh, about 80 km. northeast of Nanton. Not all of the flying was for work, though. Denny and Joan would fly to Penticton for a concert or call friends in the Kootenays, and show up for dinner on short notice. They flew together everywhere, “blissfully,” says Joan.

Denny shared a hangar in High River with Wade Rozander, a childhood friend and flying buddy. On Tuesday nights, a group of pilots—the BTOs, or “Big Time Operators,” as they jokingly referred to themselves—would meet at the hangar to share flying stories over a beer. Wade says Denny was the best of neighbours, “always there to help,” and never hesitated to give someone a lift in his plane, even to another province. Once, Denny flew Wade to Silver Lake to fix his broken truck, just to spare him the long trip by road. These kindly gestures made Denny a well-loved member of the community.

Being a good neighbour is what Denny was doing the morning of May 12, when he offered fellow farmer Eric Donovan a ride from Mossleigh to St. Brieux, Sask., to buy a part for his seeder. Denny took Eric and his 11-year-old son Wade on a plane he’d bought last year, a Piper Arrow II. As they were preparing to land in Saskatchewan, known as “big sky country” for its endless horizons and wide open skies, Denny’s Piper crashed head-on with another plane. Everyone aboard, as well as both passengers of the other plane, were killed instantly. Denny was 59.