A caregiver who worked with troubled teens, she was known for her deft touch in defusing tense situations 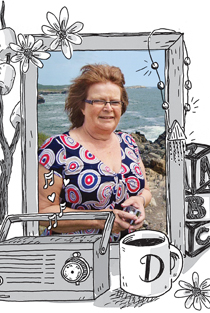 Dianne McClements was born on Feb. 23, 1951, and grew up in Sedgewick, Alta., in a modest, three-bedroom house painted white and peach-pink. She was the third child of six born to Red and Margaret Culbert, and was quickly anointed family princess. Dianne didn’t pitch in at her father’s radiator shop but did help her mother on Saturdays to wax and buff the floors. After dinner, the Culbert brood preferred hide-and-seek to the meagre offerings of a single channel on a black-and-white television. They were joined by a boy named Greg Chant who lived down the back alley. He’d tease Dianne about her mop of curly blond hair and pelt her with lumps of dirt. Before he left town after finishing Grade 2, Greg biked over to the Culbert house to say goodbye to his good friend, Dianne’s brother.

After high school, Dianne moved to Edmonton, where she married Doug McClements and had two children, Trudy and Jeff. She worked many jobs but most enjoyed her time as a teacher’s assistant working with a handicapped child. For six years, she studied part-time at a community college to earn a diploma in early childhood development. After separating from her husband, she launched into a career as a support worker for disabled and disadvantaged youth.

What began as a job became Dianne’s passion. She worked full-time in a group home for troubled teens, plus an extra 20 to 30 hours a week in the homes of families with children who had special needs. Cody Glasgow was one such child; he had cerebral palsy, which left him unable to walk. Dianne wasn’t satisfied just with meeting his needs; she wanted him to experience the life of any other boy. One day, she sat him in a red tricycle and Velcroed his feet to the pedals. Off they went, with Dianne pushing from behind. A ride on a horse followed. Another time, Dianne accompanied Cody’s family on vacation, and drove them to British Columbia in her motorhome. One morning, shortly after 7 a.m., she spontaneously decided to roast marshmallows at a campsite—every kid, she figured, deserves a roasted marshmallow for breakfast at least once.

When she was in her early fifties and living and working in Camrose, a small city south of Edmonton, Dianne pushed the limits of her dial-up Internet to surf a dating site under the assumed name of Bernice. She emailed a guy named Greg Chant, who mentioned he’d spent time in Sedgewick as a boy. On May 18, 2003, they met at Boston Pizza at 7:30 p.m. Dianne wore a bright yellow blouse with white pants to that first date, and any hints of white hair had been conquered by blond dye. They had over four decades to catch up on.

Two years later, shortly before the couple planned to move into a new home, Greg suddenly went numb from his chest to his feet and was rushed to hospital. He was diagnosed with multiple sclerosis, a degenerative disease. He lay in his hospital bed. Dianne pulled up a chair. A dark green curtain offered a hint of privacy. “I’ll understand if you leave me,” Greg said. “Eventually, I’ll be in a wheelchair.” Dianne replied, “I’m in it for the long haul.”

At home, Dianne accepted little help with cooking or cleaning. She had two rules: no public displays of affection, and don’t ever say, “I love you.” She’d been hurt before, and worried about the pain that could come from that kind of commitment. “Follow these rules, and I’ll be the best friend you’ve ever had,” she told him.

When Dianne saw the kids she worked with losing their tempers, she would step right in front of them, hardly an imposing figure at five foot one, and raise her hand—stop. “Look at me,” she’d say. Her eyes were a light lagoon blue. Then, firmly but softly she’d say, “I need you to be kind.” You have to understand what the other person has been through, she’d say, and think about their point of view. Sometimes Dianne had tough days; once, a teenage client hit her with a telephone. She would come home to Greg and a cup of coffee, and say, “I need you to listen.” Then she would greet the next day as a new day, without a grudge. “She was good at not taking things personally,” her boss, Gerry McCracken, says. “The next day she’d give that person a hug. And that’s a hard thing to do.”

On May 12, at 9 p.m., police found Dianne dead in the basement of the group home where she worked. She had been stabbed. A 17-year-old who lived there has been charged with her murder. Dianne was 61.

FILED UNDER: Obit the end