Does Kate Middleton deserve her reputation as a fashion recycler?

Crunching the data on Kate's clothes 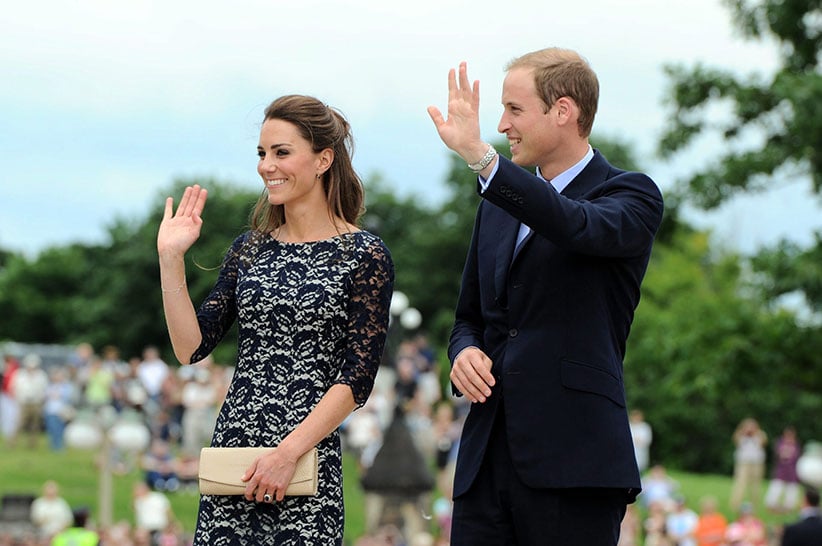 The Duke and the Duchess of Cambridge wave to the crowds as they take part in a ceremony at the National War Memorial in Ottawa on Thursday, June 30, 2011. (Sean Kilpatrick/CP)

Kate Middleton’s first tour as a member of the royal family was a roaring success. More than 300,000 people crammed onto Parliament Hill to watch the new duchess of Cambridge and her husband, Prince William, celebrate Canada Day. Thousands more lined up for a glimpse of William and Kate at every stop on the nine-day visit.

Sure there were serious events, such as meeting veterans at the War Museum in Ottawa or residents of Slave Lake, Alta., recovering from a devastating wildfire. But there was also fun, including the Calgary Stampede. What a lot of people wanted to see and talk about were her clothes, from the blue Erdem lace dress on her arrival in Ottawa to the yellow Jenny Packham silk dress that billowed dangerously in the wind at Calgary’s airport.

Kate wore 18 outfits, none of which had been seen at previous public engagements. Since then, the vast majority have stayed packed in the back of her closet, never to be seen again at public work events. Among those are dresses that are quintessentially Kate: the oatmeal Malene Birger dress from Yellowknife, the purple Issa dress from Ottawa or the grey princess Catherine Walker seen in Ottawa.

Ignoring jeans—it’s impossible to differentiate one style from another—Kate’s worn just three items from the Canadian tour on another public engagement: a stone-coloured Burberry camp shirt, a red coat dress by Catherine Walker and a navy blue jacket by the Canadian firm Smythe. (In addition, she’s worn a few others, including the Alexander McQueen sailor dress worn in P.E.I., when not on duty.)

That 17 per cent recycling rate flies in the face of her reputation as a thrifty royal who frequently rewears old outfits. “Is it time for Kate Middleton to stop recycling clothes?” screamed E! News earlier this year. “78 times Kate Middleton rewore her clothes,” stated a Cosmo headline.

“It’s not as true as people think it is,” says Jessica Morgan, whose witty Go Fug Yourself website regularly critiques royal fashion. Susan Kelley, creator of the encyclopedic What Kate Wore site, agrees: “A significant amount of clothing we haven’t seen a second time.”

“It’s human nature to wear a dress, not like it and tuck it away,” says Morgan’s co-writer, Heather Cocks. She thinks that because the Canadian tour was the first for the new royal, Kate was still “cutting her teeth, figuring out what works and what doesn’t.”

Jane Barr, creator of Kate’s Clothes, a searchable encyclopedic online database of royal clothes, wonders if her body shape changed after giving birth, pointing out that many of the dresses were tight-fitting sheath designs.

While the 2011 Canadian tour may be an exception, Kate’s closets have to be near to bursting as she keeps adding to her wardrobe. At the 52 public engagements she undertook last year, she wore new outfits at 32 of them, including virtually every maternity outfit even though she was pregnant with Charlotte the same seasons as with George. Of the five engagements Kate’s been to in the last month, she rewore her Smythe jacket and a dress seen in Australia. It’s the latest in a series of outfits from the 2014 Down Under tour that have been pulled out, brushed off and reworn, Barr notes.

Kate “can’t win for losing,” says Cocks, pointing out that she’s criticized either way: for repeating too soon or being extravagant by buying too many new pieces, many festooned with four-figure price tags. For those who follow Kate’s style, part of the explanation for her recycling reputation is that the duchess has bought an extraordinary amount of very similar clothes in the last five years; Barr’s ever-growing database includes nine black coats, 21 white or cream dresses, and 14 in shades of electric or ice blue.

Then there’s her ubiquitous beige shoes. In the beginning she wore platform pumps from L.K. Bennett, but now similar non-platform versions. “People have prayer circles that she won’t wear the [beige] shoes again,” Kelley says. “I get the utilitarian. Nude pumps, it’s easy, not as many decisions to make.” Same goes for her small handbag.

As for those missing 15 outfits from Canada, Heather Cocks wonders about all those dresses identical to Kate’s outfits sold on eBay. Maybe one of the sellers is actually her. Even a royal has to run out of space at some point.