Does reclining your airline seat make you an awful person?

It's not just a question of whether it's unethical to recline, but also whether airlines should even install reclining seats in the first place 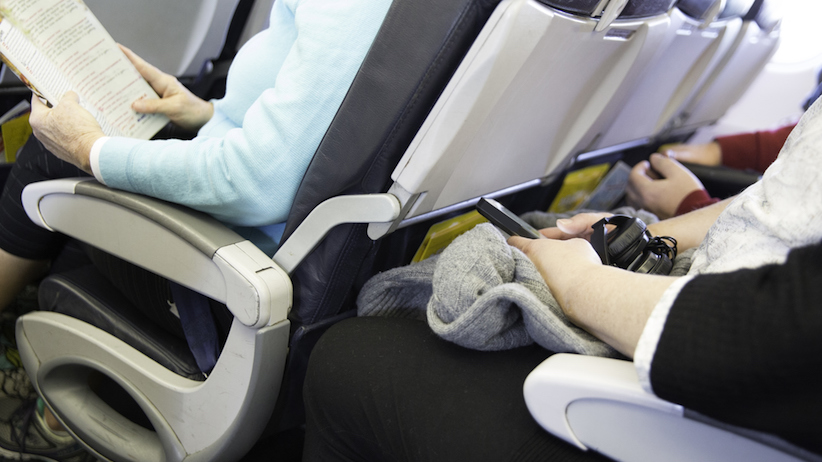 Air travel has a way of inducing ethical turbulence. Disagreements about who can claim overhead bin space, the shared armrest between seats, or even a seat at all, remind us that scarcity and conflict are frequent companions. Space inside airplane cabins is a remarkably scarce good and the few inches between seats is perhaps the most contested terrain. Incredibly, airlines give those sitting in front of another person the ability to take a greater share of that space simply by reclining their seat. But is it ethical to do so? Who owns the space between the back of your seat and the front of my face?

One way to think about the ethics of seat reclining is through a consequentialist lens. Which arrangement or rule would maximize happiness and minimize harm? The right answer will likely be very case-specific. A smaller person reclining into the space of a larger person, for example, will likely generate more harm than benefit overall. By contrast, a larger person reclining into the space of a smaller person might generate comfort for herself that outweighs any inconvenience to the smaller person. But what should we think in cases where groups of larger people are seated together? And what should we do when people want, but arguably don’t need, additional space?

An economic approach might offer a clearer path. Instead of trying to sort out who has a right to the space between seats, why not figure out who values the space more and allow that person to purchase it from the other? In an online poll, researchers from New York University and IIT Chicago-Kent, asked people to imagine that they are about to take a six hour flight and that the airline has a new policy that allows passengers to pay the person seated in front of them to not recline their seats. Half of the respondents were asked what would be the least amount of money they would accept to not recline during the flight. The other half were asked what would be the most amount of money they would pay to prevent the person in front from reclining their seat.

The researchers found that the first group of respondents would accept no less than $41, on average, to agree not to recline their seats. By contrast, the second group of respondents were willing to pay only $18, on average, to prevent a person from reclining into the space in front of them. Initially, this suggests that people value reclining over not having someone recline into their space. But does this result give us a suitable guide to resolving the ethics of seat reclining?

Maybe not. In the experiment, respondents assumed that the seats were capable of being reclined. Thus, respondents likely thought that the ability to recline implies a right to recline. Given that people tend to value things more when they have them than when they have not yet acquired them—the so-called “endowment effect”—it’s not surprising that seat reclining was valued more highly in this scenario. When the researchers altered the assumption, and told people they had to negotiate for the right to recline, their valuations changed. In the new scenario, potential recliners were willing to pay only $12 to do so, while others were unwilling to sell the space in front of them for less than $39.

As such, the experiment merely kicks the ethical issue further down the runway. We need to ask not simply whether it is ethical to recline an already recline-able seat, but also whether it is ethical for airlines to install reclining seats in the first place. Increasing use of so-called “Knee Defenders”—small devices that passengers can attach to table trays thereby preventing others from reclining their seats—suggests that some people reject reclining seats as a legitimate default. Although most airlines have wisely banned the devices, their continued use has intensified the ethical debate—and demonstrated that people are willing to pay a price to sit behind a seat that cannot be reclined.

So, what should be done? A general principle or one-size fits all approach is not likely to work. An alternative may be for airlines to offer a variety of reclining seat and space options and prices. For an industry that has the capacity to make seemingly infinite distinctions in types of fares, surely it would be simple enough to introduce discounts or premiums to satisfy different preferences and reduce conflict about reclining. Don’t mind someone reclining in your face? Enjoy a discounted fare. Want to recline your seat a few extra inches? Simply pay a recliner premium.

In the meantime, there is a common sense and ethical way for passengers to manage the tension. If you want to recline your seat, politely ask the person behind you whether they would mind. And if a recliner causes you physical or psychological discomfort, politely ask if they would mind adjusting their seat a little. It probably won’t work every time, but being considerate could smooth at least some of the ethical turbulence we feel in the skies.

Daniel Munro teaches ethics in the Graduate School of Public and International Affairs at the University of Ottawa. Listen to The Ethics Lab on Ottawa Today with Mark Sutcliffe, Thursdays at 11 EST.