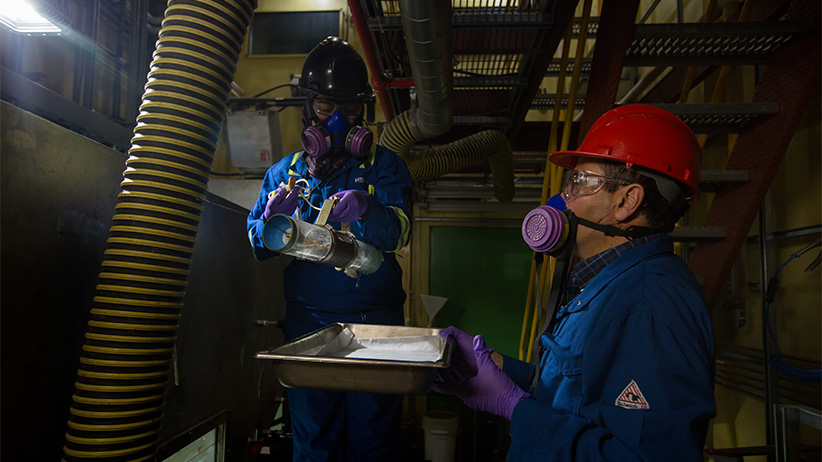 Heather Dettman has spent nearly two decades taking her lab coat on and off at a federal research complex located on 1 Oil Patch Dr., a right turn off Derrick Drive in the Alberta town of Devon. For much of her career, the petroleum engineer has been studying efficient ways to clean the oil from the sands, pulling processed bitumen out of the water. “Now we’re throwing that nice clean oil back in and seeing what it does,” she says.

How pipeline bitumen fares on water—does it float or sink?—when it spills is the big, sticky question at the heart of the debate over the environmental dangers of resource development. Dettman’s team with Natural Resources Canada is churning diluted bitumen (known as dilbit) into fresh water and salt water, trying to discern the facts between the proclamations from environmentalists and industry. “Better climate policies won’t make bitumen float,” Vancouver-based Dogwood Initiative says in one release protesting Kinder Morgan’s Trans Mountain pipeline. “If it spills in water, you’re screwed.” The pipeline company’s “myth-busting” page leads off with that same assertion. The roughly 300,000 litres of tar balls and dilbit globs that sank in the Kalamazoo River in Michigan in 2010—they don’t lie. But nor does the nearly 10 times greater amount that was skimmed and recovered from that massive Enbridge pipeline spill. The Harper government’s World Class Tanker Safety initiative and Justin Trudeau’s new Oceans Protection Plan have assigned the Yale-educated Dettman to recreate spill scenarios, to figure out just how spillage of Alberta dilbit differs from conventional crude.

“We’re trying to figure out if it’s different worse or different better. And the answer is: it depends.”

Most of her findings thus far side with the pipeline and oil companies. Dettman commissioned a 1,200-litre spill tank at her lab in the small town southwest of Edmonton. It looks like a small, primitive wave pool—a large plate repeatedly shoves water toward a sloped metal “beach” with sand and sediment. Mainly, she tests conventional crude and compares it with dilbit, the pipeline-ready blend of bitumen from northern Alberta and a lighter diluent, normally composed of lighter crudes and gas condensates—the stuff that will course through Trans Mountain, Keystone XL and other big proposed pipelines. After seven to eight days in the spill tank, some days with breaking waves and some with still water, a bitumen blend from Cold Lake, Alta., was mostly floating in a thick, bubbly layer. It stayed buoyant the whole week; when conventional crude hit the spill tank waves, it mixed “so that the water all went black,” she says. It bubbled up around day three, but in a few more days it was at the tank bottom.

Related: Rachel Notley takes on pipeline critics—even if they’re from her party

Neither product is heavier than water, so shouldn’t readily sink. Her explanation for the varied reaction has to do with viscosity. With a lower viscosity, the thinner petroleum mixes into the water more quickly, and interacts with sediment that carries it downward, Dettman says. The oil sands product, though diluted, is still thicker and mixes less.

“There’s time for responders to respond and pick it up using skimmers and booms,” she says.

But the floating dilbit does absorb some water, creating a thicker and more voluminous band of spill that responders must recover. While this makes dilbit less of a fish killer than traditional crude, it’s more of a hazard for birds and mammals. There is no benign spill. “Hydrocarbons are not good for life as we know it,” Dettman says. “There should be no argument: It’s all bad.”

Dettman’s findings seem to differ from a major study after the Kalamazoo disaster, by the United States National Academy of Sciences. It says diluted bitumen tends to sink more quickly, an observation based more on density than viscosity. The lighter diluent partially evaporates from the dilbit, which makes the remaining mixture heavier and more prone to sink. The evaporation and buoyancy will vary greatly by what diluent a company uses and what sort of bitumen is travelling—or even what time of year the pipeline is active, says Merv Fingas, a former Environment Canada spill science expert and a co-author of that U.S. report. But he agrees with Dettman that it doesn’t sink right away.

“Under typical Canadian climactic conditions, you’ve got up to three weeks to clean it up before you’ve got any major sinking,” he says.

Then there’s the atypical weather. Dettman’s above-mentioned test was at 15° C. Kalamazoo happened in hotter water (and during a river flood, meaning higher pressure and more sediment for oil to attach to). After eight days in 26° C water in Dettman’s tank, the water stained brown with dilbit and large globs formed on the surface and below, as the bitumen blend gradually wore down, she says.

Cold weather is a bigger mystery, a major knowledge gap flagged in the Royal Society of Canada’s industry-funded review. Dettman’s team has commissioned a second spill tank to simulate winter conditions, ice and snow, to figure out how Canada’s love-it-or-hate-it white stuff interacts with its love-or-hate black stuff.