Dominic Cozzolino gets back into the game

A freak accident dashed Dominic Cozzolino’s first dreams. His refusal to give up has pushed him to the top. 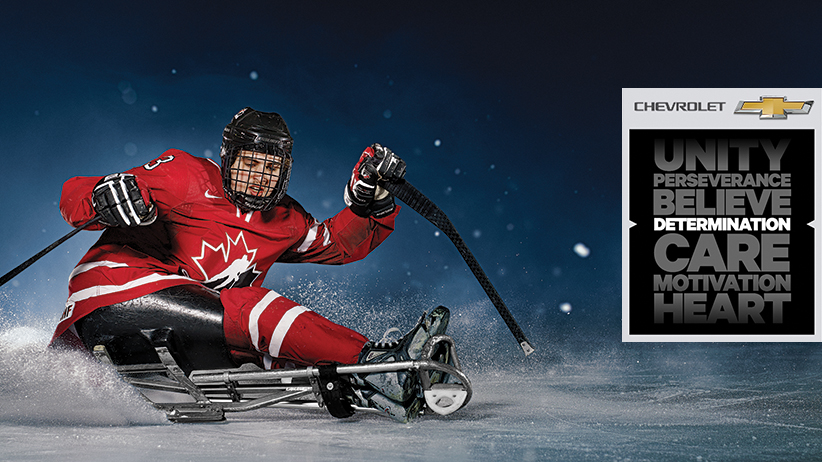 With two minutes to go in a crucial AA hockey playoff game, Dominic Cozzolino took a shot on goal, was checked from behind and slid into the boards, making contact butt-first. To those watching, it looked like a typical hit. But the 14-year-old didn’t get up. “I felt the vibration go up my spine,” says Cozzolino, “and then I couldn’t feel my legs.” His father, Frank, made his way to the ice; his mother, Jennifer, stayed in the stands with their younger daughter, Melissa. For Cozzolino it felt like an eternity, lying there waiting for the ambulance. And then things sped up. Within 24 hours, he was transferred to three different hospitals and seen by multiple doctors—all of whom stressed the seriousness of the injury. Cozzolino remembers asking his dad if he’d be able to play in the next playoff game later in the week. Overhearing this, a doctor replied, “He’ll be lucky to ever play again.”

The injury happened on March 3, 2009, but Frank still tears up when talking about it. Cozzolino, now 21, is completely matter-of-fact. “I had a compression fracture to my L1 vertebra,” he says, “which is just above your tailbone. They call it a burst fracture, because the vertebra explodes. And the bone fragments went into the spinal canal, which causes nerve damage.” He underwent an eight-hour spinal decompression surgery—and was told he had a 50-50 chance of ever walking again. It would depend on how his body reacted to the surgery and rehab. Anyone who’s watched Cozzolino these past seven years knows that his dogged determination has played a huge role in his astounding recovery. Not only can he walk, but he can skate—and he’s a forward on Team Canada’s Olympic-bound sledge hockey team.

As a kid, Cozzolino moved through the ranks of rep hockey. He was an average skater, had strong stickhandling skills and a keen hockey sense. The season leading up to the injury, he was playing for the Mississauga Jets, a top-ranked AA team in Ontario at the time. “When he started that year,” says coach Rick Gaetz, “he was a bottom-half forward. But Cozzy finished the year as our leading scorer.” Gaetz was taking over a AAA team the following season, and weeks before the accident he asked some of the best Jets players, including Cozzolino, to move up with him. “I definitely wanted to get drafted to the OHL or WHL,” says Cozzolino. “I would have had to work hard, but I think it would have been achievable.” Gaetz, who now owns the OHL’s Guelph Storm, agrees: “He was a next-level kid and wanted to do whatever he could to get to the next level. I’m sure that’s why he’s playing on the national team now.”

When playoff time came around, Cozzolino was still improving his game, thanks to skating instruction from Gaetz’s wife, former Olympian Barb Underhill. “In one of the last sessions I had with him,” says Underhill, “something that I told him really clicked—and he was just flying. I remember the smile that he had on his face as he was coming toward me. And it was a couple days later that that all ended.” When the hit happened—and Cozzolino wasn’t getting up—Gaetz rushed to his side. “Cozzy was not a player to lay on the ice,” says the coach, “I knew something was up. I laid down on the ice with him and looked in his eyes, and the longer I was there the more concerned I got.”

In surgery, they had to collapse his lung in order to get at the spine and remove the shattered bone fragments, which they used to construct a new vertebra and fuse it to another, using a titanium rod to hold it all in place. He was in intensive care for weeks—and the pain was palpable. “Somebody at the end of the hallway would close a door,” says Frank, “and he would ask, ‘Who’s shaking the bed?’ ” Over the next few months, Cozzolino went through excruciating rehab, as he relearned everything from sitting to climbing stairs. He took his first step on a day that Gaetz came to visit. “It kicked in for me that day,” says Cozzolino, “that I had to work hard and that I wasn’t just going to lay down and die.” 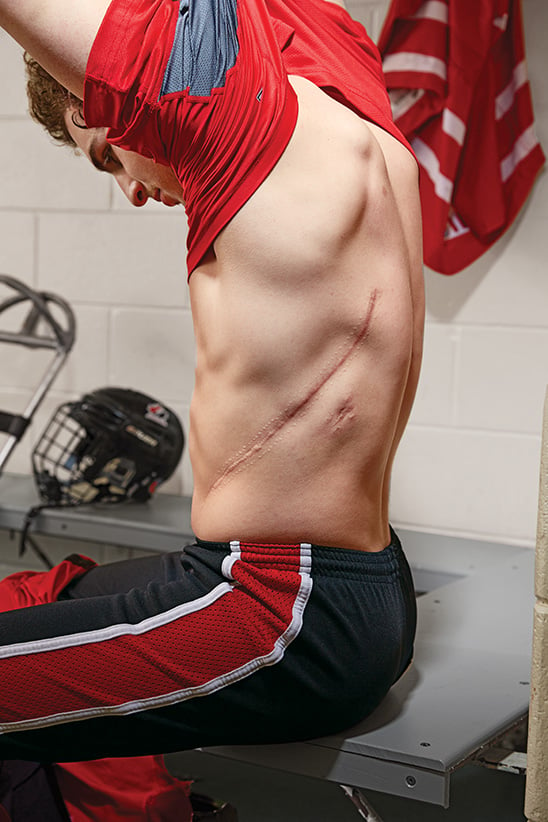 Hockey player Dominic Cozzolino shows the scar from his surgery that allowed him to walk again. (Photograph by Finn O’Hara)

Frank and Jennifer were unsure what their son’s future would look like, and there were some dark days. “Often we’d bring guilt trips on ourselves,” says Frank, “wondering if we pushed him too hard, put him in levels of hockey he wasn’t ready for.” But Cozzolino’s parents are not the pushy type—and their son can’t stress enough how much their love and support has helped him. “One of them was always with me,” he says. “I was never alone, so I was never getting down on myself.”

Cozzolino came home in June—3½ months after the accident—with a wheelchair and a walker. But he was determined to get around on his own: he’d take a step, lean on a wall, use the dining room table as support as he made his way to the kitchen. “For a year, I had pain everyday just from standing,” he recalls. “I couldn’t walk very far before having to sit down. Even sitting for long periods was tough.” When he returned to school in September, he was walking well enough unassisted—but he was not the same person. “I used to be an athlete, play football at lunch, run all the time,” says Cozzolino. “I was worried about having a relationship with those same friends that still did that stuff. I didn’t want to be the guy who was watching all the time.” He took up weightlifting and spent most of his free time at a local gym.

Eventually, he started thinking about hockey again. His old skates no longer fit and he bugged Frank to take him to buy new ones. “I’ll give my dad credit,” says Cozzolino, “because he probably knew it wasn’t going to work. And he bought them anyway.” Suffice it to say, those brand-new skates sit unused in the family’s basement. When Cozzolino told Underhill that his ankles were too weak for skating and he couldn’t fit his leg braces in the skate boot, she immediately contacted her Battle of the Blades co-star Claude Lemieux. The former NHLer, who is now chairman of hockey skate manufacturer Graf Canada, connected Graf designers with the orthotists who made Cozzolino’s braces—and together they came up with a custom boot-brace combination. One very emotional day, four years after the accident, all involved met at a rink. Cozzolino pushed a chair around for a couple of laps before gliding with confidence on his own. “It was great just to fool around on the ice,” says Cozzolino, “to know that I would be able to teach my kids to skate one day.”

Knowing Cozzolino’s competitive spirit, more than one person suggested he try sledge hockey—a version of the game played on double-bladed metal sleds, where the players hold two small sticks, one to propel and one to shoot. He was unconvinced: “I was so used to the NHL, having one stick and being on skates.” But seeing the game live changed his mind. “You could fake guys out, deke them out,” he says. “They were putting shots in the top corner. It was still hockey.” Mastering the sled was frustrating—and Cozzolino had to develop muscles he’d never used before. He joined a team and grilled the other players about how to get better. And he set some lofty goals right off the bat: make Mississauga’s elite team, then the Ontario team and then Team Canada.

He did it all in three years. In his first season with the national team, he’s put up impressive numbers. Coach Ken Babey says he’s on track to compete in the 2018 Paralympic Games in South Korea. “His progress has been very fast and very encouraging,” says Babey. “He’s determined to win the races, win the battles, to learn and work on his game. We think he’s a potential leader for the national team in the future.”

Frank and Jennifer are proud, of course, but for them sledge hockey is terrifying. The family considers it more violent than stand-up hockey—they’ve seen up to 70 hard hits in a game, especially when rivals Team Canada and Team USA meet up. “I was not on board with it,” says Jennifer. “But the first day he went around that ice, the smile on his face said it all. We knew we had to give in.” Cozzolino says his back is protected by the sled’s bucket seat—and he’s not worried about another injury. That said, he no longer thinks he’s invincible: “This teaches you anything can happen, not to take anything for granted. And it taught me how to work hard, it really brought that out in me.”

In Partnership with Sportsnet