'Skimo' devotees love the sweat of the climb 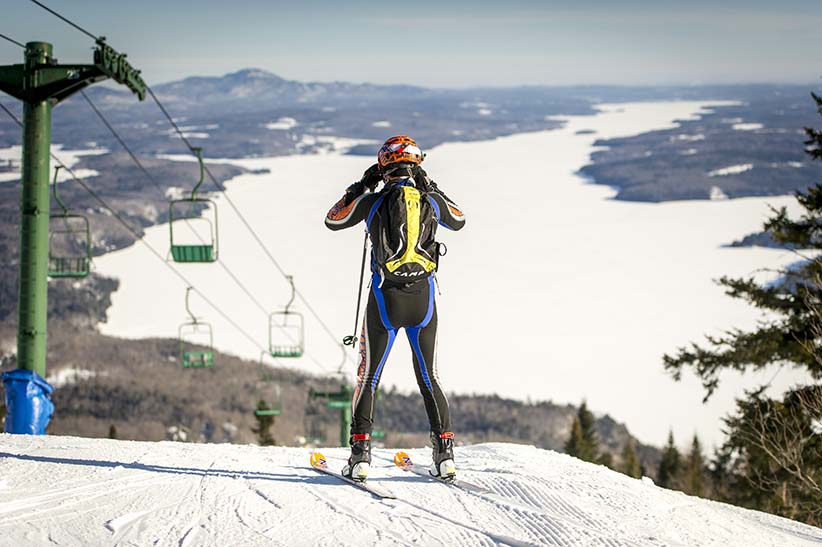 It’s a regular Sunday morning at the base of the Owl’s Head ski centre in Quebec’s Eastern Townships, but one group of skiers stands out from the pack. They’re doing warm-up stretches in Lycra tights—even though it’s freezing out. A whistle blows and they push toward the chairlift. But then they keep skiing, past the lift and straight toward the mountain—a group of lost souls on skis. Their rather peculiar objective: trying to climb the mountain, in the shortest time possible, on the power of their own quadriceps.

The competitors, including Canadian Olympic cycling champion Lyne Bessette, are adepts of a new competitive Nordic sport called ski mountaineering, or ski touring, or just “skimo” for short. Best described as “upside down” skiing, the sport involves climbing, then descending the mountain. In Canada, it’s the latest addition to a growing body of snow sports that includes Telemark skiing, backcountry skiing and skate skiing. As far as devotees of ski mountaineering are concerned, happiness is not in the thrill of the descent, but in the sweat of the climb.

The sport, which first caught on in the Gaspé region, is now spreading like wildfire throughout Quebec’s ski centres. Mont Tremblant has created eight new climbing corridors on the side of the ski hills and in the forest. Owl’s Head opened a backcountry sector exclusively for skimo. In B.C., where skimo has been slower to take off, Nelson’s Whitewater Ski Resort hosts the Kootenay Coldsmoke Powder festival, whose events include a skimo race. “Ski mountaineers are against what they call ‘industrialized’ skiing,” explains Geneviève Larivière, vice-president of  ZoneSki, a website and magazine dedicated to alpine skiing. “They want to take skiing back to its origins. They say when you get to the top, you ‘earn your turns’ to ski down.”

There’s nothing really new about recreational ski mountaineering. In Europe, high-altitude ski trails have linked villages for decades, and skimo racing—also known as rando racing, after the French randonnée—has taken off as a competitive sport over the past 20 years. In Western Canada, too, powder skiing aficionados have been climbing mountains for years in their quest for virgin snow. But the new version of ski mountaineering is not just for lovers of extreme sports. Today’s ski mountaineers are not so much thrill seekers as people looking for a way to get in shape.

“People are giving up their stationary bicycles and heading to the mountains for cardio training,” says Gilbert Rioux, director of trail development at SEPAQ, Quebec’s provincial parks network. A veteran hiker himself, Rioux created the Chic-Chocs mountain lodge in the heart of Quebec’s Matane Wildlife Reserve. It’s the first mountain lodge in Eastern Canada, and ski mountaineering is its star activity. “When we opened in 2006, it was a hard sell. Today, we’re almost fully booked for the whole winter,” says Rioux.

Converts to ski mountaineering also hope to get away from the crowds and reconnect with nature. “People are getting tired of ski centres. They’re looking for new ways to experience mountains,” says Simon St-Arnaud, events producer and host of l’Aventurier alpin, a TV show devoted to ski mountaineering that has been playing on the French-language Évasion channel since 2010.

George Visser, the winner of that ski mountaineering race at Owl’s Head, got his first taste of skimo out west, and has been practising the sport for three years now. He believes it’s the best of both worlds, combining the satisfaction of mountain climbing with the thrill of downhill skiing. “I don’t need to ski for eight hours anymore. I do my workout in two hours without wasting a minute waiting in line,” says the 43-year-old triathlete, brother of Canadian Olympic cross-country skier Guido Visser. For Bessette, the beauty of the sport is that it requires no technique. “It’s easier than ski skating, and the downhill part isn’t dangerous because you’re on alpine skis,” explains the 40-year-old former bicycle racer. The other advantage is built-in protection from the cold. “Even if it’s -20° C out, you’re dying of heat,” says Visser.

But not everyone is jumping on the bandwagon, especially ski-hill owners, who take issue with the behaviour of some “off-the-grid” skiers. Many ski mountaineers climb the groomed ski trails and ski down without paying for a ticket. “But if one of these skiers has an accident, it’s our ski patrols who go to their rescue,” explains Yves Juneau, president of Quebec’s association of ski centres. The three hills within a half-hour drive of Vancouver all have policies against uphill skiing in-bounds. This pushes uphill skiers into the side country—just outside the resorts—though they often sneak back in to use groomed runs on the way down. Ski hills in North Vancouver don’t want to be associated with avalanches, frostbite and people getting lost, says Julian Stoddart, a sales rep for Dynafit, a well-known brand in ski touring. He says ski-hill owners tend to associate, wrongly, any kind of uphill skiing with backcountry or out-of-bounds skiing. “Every time some recreation alpine skier or snowboarder ducks a rope and gets lost down the backside, it’s usually two to three days of negative publicity, helicopters flying around,” he says.

Ski mountaineers also like to use ski slopes after opening hours when centres are doing trail maintenance, making the risk of run-ins with heavy machinery very real. But mostly, ski centres don’t see what’s in it for them. “Unlike snowboarding, which was a new source of revenue, ski mountaineering doesn’t bring ski centres any money,” says Juneau. “So far, sporting goods manufacturers are the only ones making a profit from it.” Like most winter sports, skimo is heavily dependent on gear. A full kit, including skis, boots, bindings and climbing skins, can run $1,000 to $3,000 for entry-level or intermediate gear. That’s because weight is everything in skimo racing. The gear is modelled on alpine ski equipment. The major difference is in the bindings. Skimo bindings have a releasable heel that allows the user to “walk” uphill. To move uphill, the skis also need traction. That’s where climbing skins come in. Think mohair on your cross-country skis, back in the day. Once the climbing is over and it’s time to descend, the skins come off and the heels lock down, just as in a downhill ski setup. More ski hills are finding ways to mitigate the risk of litigation and allow uphill skiing.

In B.C., Whitewater has a map suggesting an out-of-bounds uphill route to access the resort’s famous adjacent backcountry. “You do enter avalanche terrain,” says Kirk Jensen, the resort’s general manager, “but it can be avoided, with the proper training.” B.C. mountains are rugged and avalanche-prone, and if resorts don’t provide the space for skimo skiers to train in a controlled environment, that’s a barrier for the recreational scene growing in some places. At Arapahoe Basin in Colorado, the ski patrol posts a bulletin every day by 6 a.m. indicating if uphill ski routes are open. Skiers who have signed a waiver receive a complimentary pass to climb designated routes until the lifts fire up at 9 a.m. Then they lock their heels for the descent. They get the same access after-hours. “We see this as such an important part of who our guests are,” says Adrienne Saia Isaac, the resort’s marketing manager.

Despite the uphill battle out west, the sport is growing in Canada. Vancouver’s Stoddart says he’s seen a surge of trail runners flocking to uphill skiing. “They are similar experiences; you’re out in the mountains, moving through them quickly,” he says. And, given the dismal snow conditions on Vancouver hills in recent seasons, and the fact that skimo requires very little snow, the fringe activity could prove to be a form of diversification for resorts. Says Stoddart: “It’s time we knock on their door again, because maybe their staunch resistance will soften a little.”

This article is presented in partnership with Lexus.