Dressed to impress: The classic uniforms of Queen Elizabeth II

Whether she’s meeting heads of state or walking the corgis, the Queen has a particular style that's bright yet meticulous 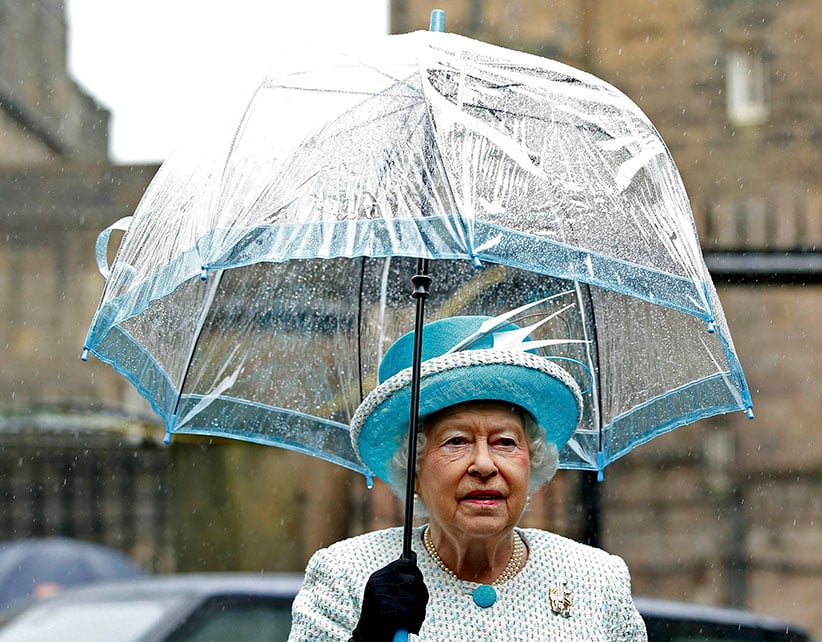 Queen Elizabeth II holds an umbrella as she visits Lancaster Castle on May 29, 2015 in Lancaster, England. (Andew Yates/Getty Images)

Elizabeth II’s outfits may be in a rainbow of bright colours, but they are as much a uniform as any military one. While her children and grandchildren are increasingly casual in their attire, the monarch is from a more formal “hat and gloves” generation. The Queen’s formulae for how to be easily seen in a crowd were perfected early in her reign, and have been tweaked, rather than reinvented. Always age-appropriate, the early towering peep-toed pumps, wasp-waisted New Look skirts gave way to sleeveless shift dresses and, finally, to more sedate, covered fashions. Her hair, however, has gone from brown to grey and then to white, frozen in the same style since 1956.

She is a billboard for British style; her current designers are based in London. The clothes are classic styles meant to be worn again and again. Her Majesty may live in a palace, but she’s thrifty. Fabrics given to her on tours are turned into evening gowns by her dresser, Angela Kelly. Over the years, subtle modifications and updates to previously worn dresses and coats have been recorded by bloggers. Some outfits have been in service for well over a decade. Even her gloves and hats are returned back to their makers for repairs.

In an era of fast fashion, Elizabeth II’s solid, unchanging style is a symbol of steadfast tradition. 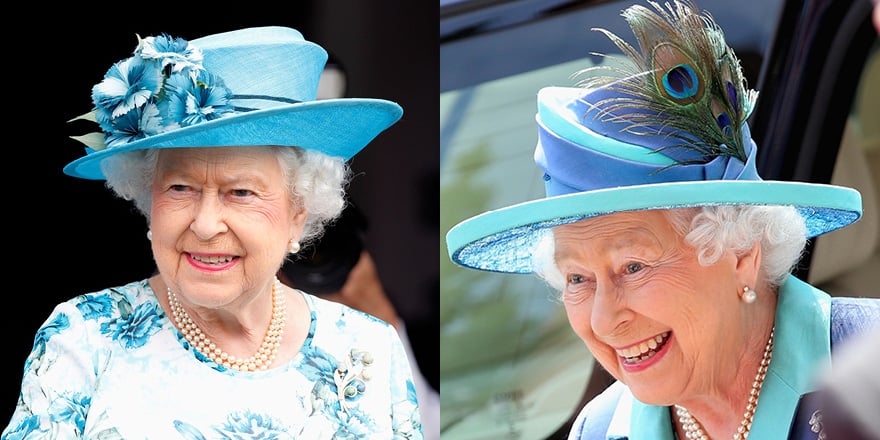 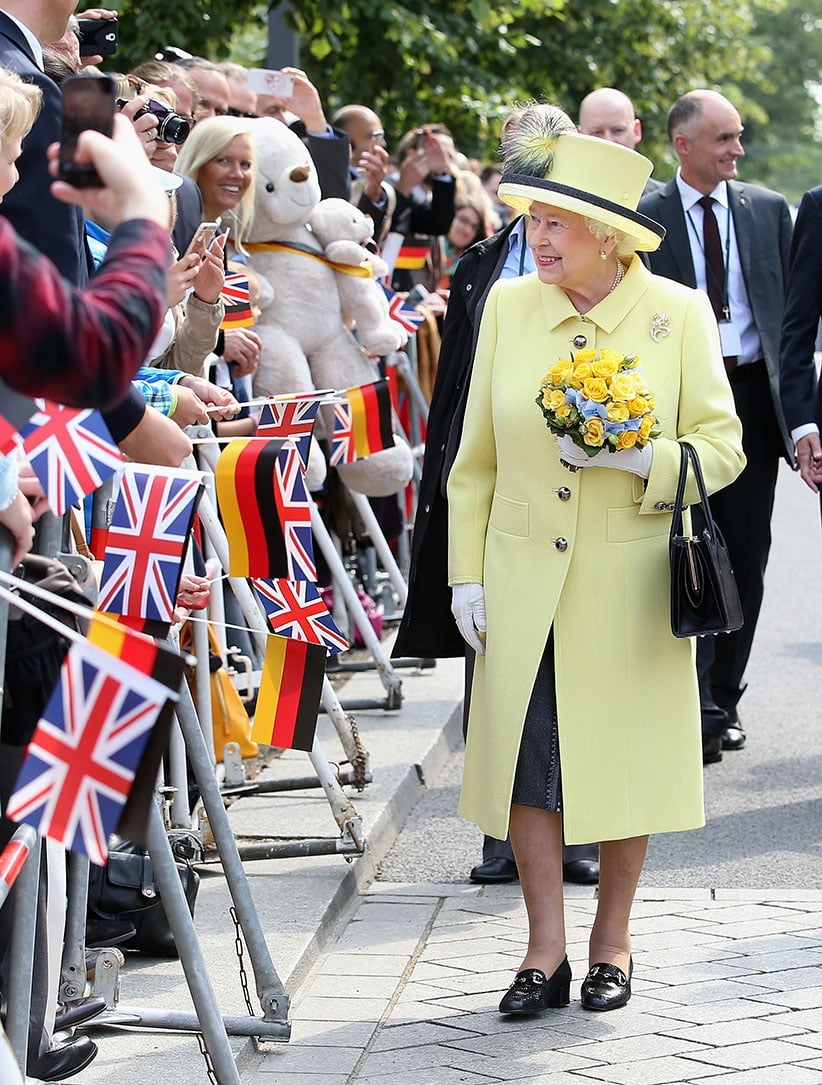 Queen Elizabeth II smiles as she departs the Adlon Hotel on the final day of a four day State Visit to Germany on June 26, 2015 in Berlin, Germany. (Chris Jackson/Getty Images)

Hat: She’s fond of brimmed pieces—never too big that they obscure her face—that are trimmed with feathers, bows and other millinery tricks that make them stand out as uniquely British creations. Designers include Angela Kelly and Rachel Trevor-Morgan.

Coat: Often wool in winter, silk in summer, it is cut large enough to allow for easy movement. Designers include Angela Kelly, as well as Karl-Ludwig Rehse and Stewart Parvin.

Dress: Usually silk, designed to be worn with the coat, with below-the-knee hems weighted so as not to fly up. She never removes her coat in public, instead “retiring” from view for the change.

Jewellery: A triple strand of pearls, diamond-and-pearl earrings and a brooch pinned to the left lapel. Her watch is usually a gold one, reportedly given by Canada during her 1951 trip.

Gloves: Since 1947, they have been made by Cornelia James Ltd. of East Sussex. The firm provides her a dozen 15-cm-long pairs a year.

Handbag: Launer London purses, handcrafted in Britain and costing up to $3,000, are matched with her shoes. Inside is lipstick, a gold powder compact, a handkerchief, as well as a portable hook used to hang it under a table.

Shoes: Her $1,800 handmade shoes are created by Anello and Davide of London and are usually black patent, with a chunky two-inch heel.

Umbrella: If needed, a British-made, rounded, see-through Fulton umbrella will be held. The colour is coordinated with her outfit. 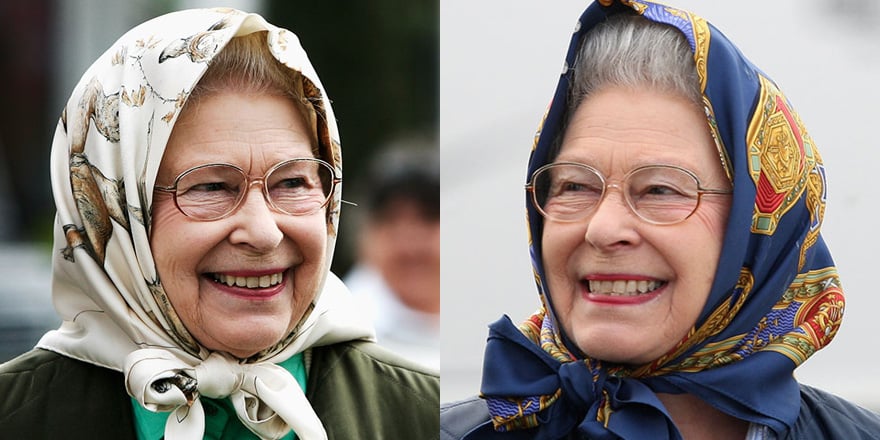 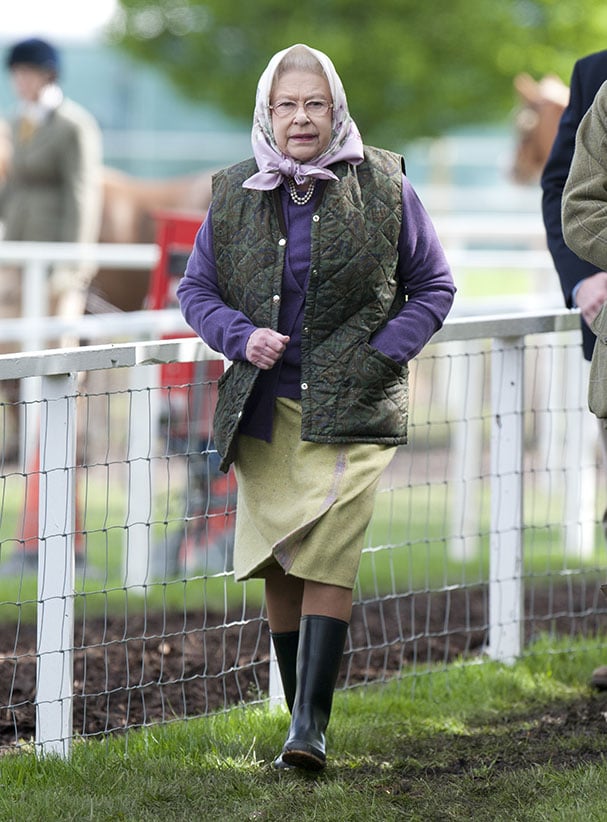 Sweater: The Scottish firm Pringle, which has a Royal Warrant for “knitted garments,” is famous for its cashmere and wool sweaters. The Queen has them in many colours.

Skirt: The Queen is rarely seen in pants, so the choices are often a wool skirt or a kilted version by Kinlock Anderson of Scotland. The Balmoral tartan worn by the Queen can only be worn by others with her permission.

Scarf: Only Hèrmes will do. The Queen has an impressively large collection. 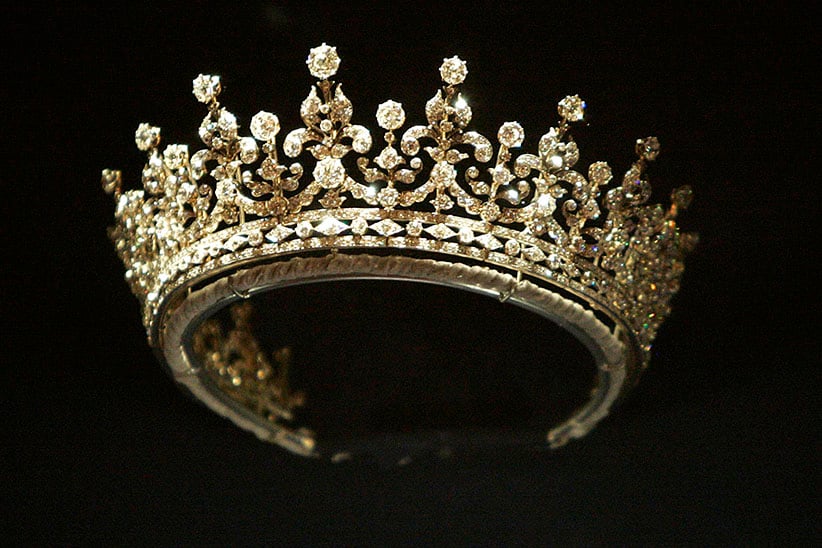 Made by Garrards in 1893, this silver and diamond tiara was a wedding present for the future Queen Mary from the Girls of Great Britain and Ireland, displayed at Buckingham Palace in London, U.K., Friday, July 27, 2007. (Carl Court/Bloomberg/Getty Images) 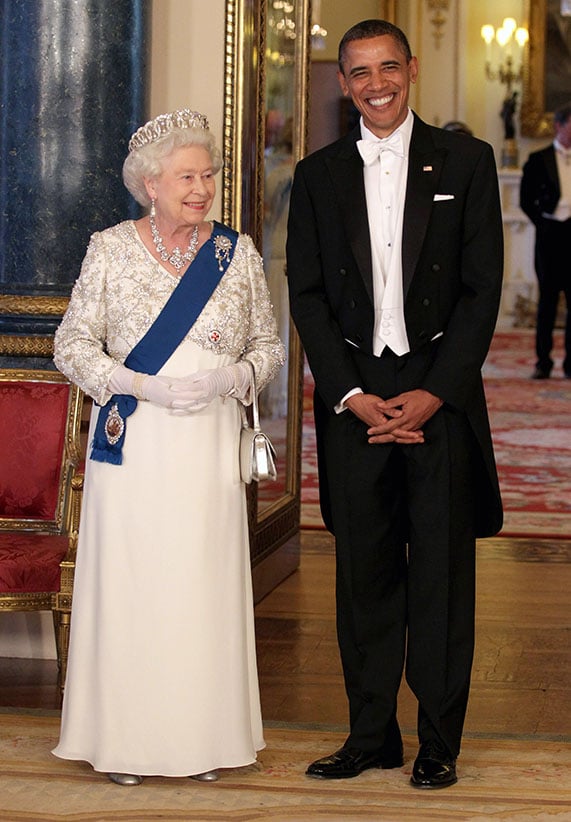 Queen Elizabeth II and US President Barack Obama arrive for a State Banquet at Buckingham Palace on May 24, 2011 in London, England. (Anwar Hussein/Getty Images)

Dress: In recent years, she’s favoured white gowns, eschewing the bright colours she used to wear. Those dresses can be adapted to honour hosts: embroidered Maple Leaves added for a trip to Canada, shamrocks in Ireland.

Tiara: As well as all-diamond versions, others feature sapphires, rubies, emeralds, aquamarines and pearls. Her most famous is the Girls of Great Britain and Ireland tiara, given to her grandmother as a wedding present in 1893.

Jewellery: She’s got necklaces set with every imaginable gemstone, but now favours all-diamond versions, of which she has at least 12 variations. She also wears substantial earrings, as well as a diamond watch, and at least one bracelet.

Insignia: The most senior order of chivalry in Britain is the Order of the Garter, founded in 1348. Its insignia is frequently worn by the Queen. The mid-blue riband hangs crosswise across the body, from the left shoulder, where it is held in place by a diamond brooch.

Shoes: Either silver or gold evening shoes, also made by Anello and Davide.

Handbag: Again, either silver or gold. 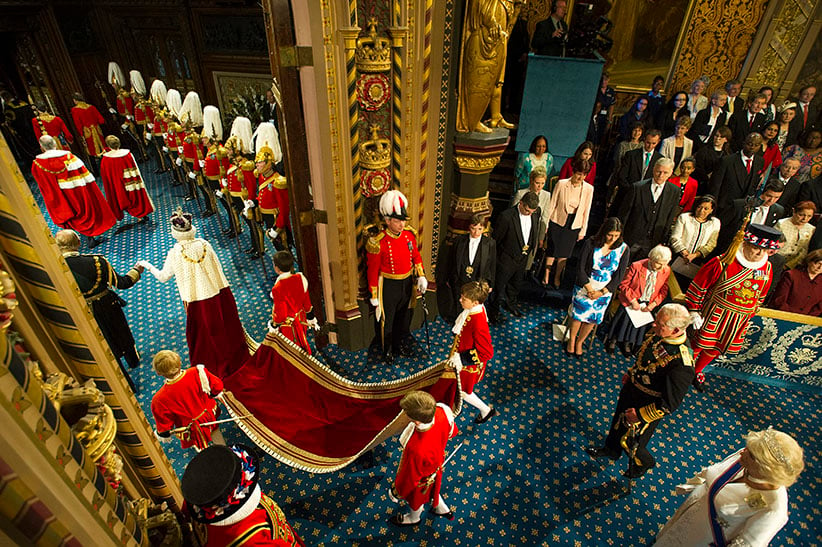 Queen Elizabeth II is accompanied by Prince Philip, Duke of Edinburgh, followed by Prince Charles and his wife Camilla, Duchess of Cornwall, pass through the Royal Gallery during the State Opening of Parliament in the House of Lords, at the Palace of Westminster on May 27, 2015 in London, England. (Geoff Pugh/WPA/Getty Images)

Gown: As with evening events, she prefers white these days. Many versions are heavily embellished.

Headgear: When tiaras won’t do, it’s time for a diadem or a crown (she wears the George IV diadem to Parliament, and Imperial State Crown during the actual state opening), while velvet caps with feathers are de rigueur for ceremonies honouring ceremonial orders.

Robes: The firm Ede and Ravenscroft of Britain has been making royal robes (imagine a floor-length cape, with a really long train) since 1689. For Elizabeth’s coronation in 1952, the company used silk velvet, Canadian ermine and a staggering amount of gold embroidery to create two robes. The seven-kilo, seven-metre Robe of State is used for the annual opening of Parliament.

Shoes: Either silver or gold evening shoes, made by Anello and Davide.

Handbag: Again, either silver or gold.