As Jordan Leopold is traded to the Minnesota Wild, his daughter's letter goes viral 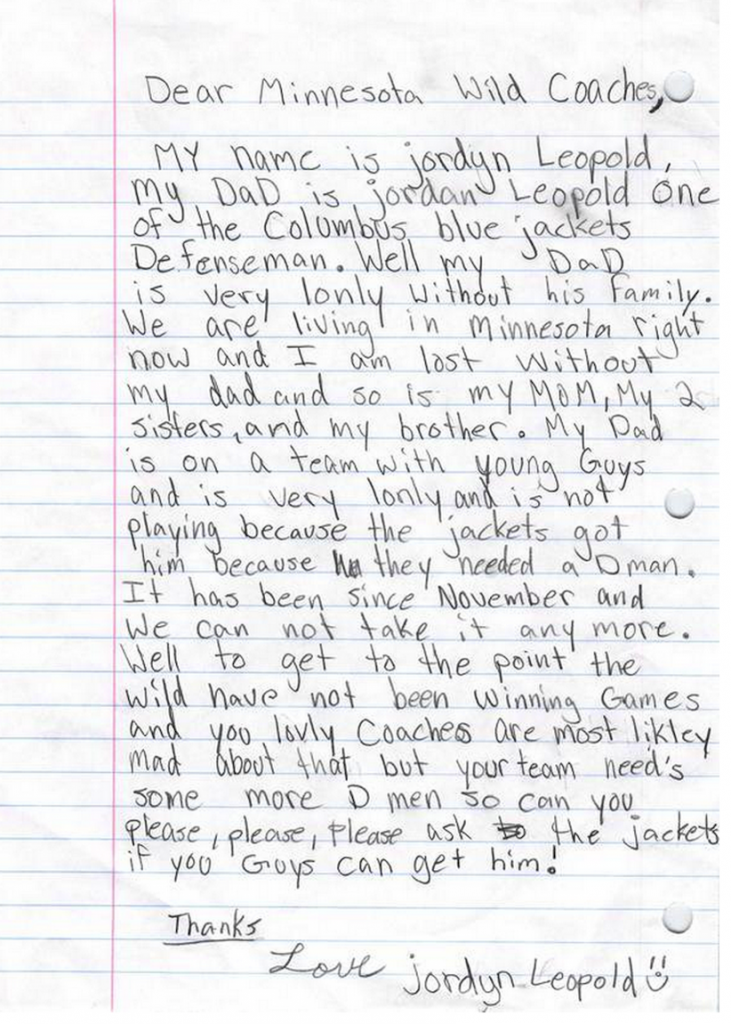 Nobody could have been more delighted by the deal than Leopold’s daughter.

Hours before the trade with the Columbus Blue Jackets was finalized Monday, a photo of a heartfelt letter 11-year-old Jordyn Leopold wrote earlier this winter to the Wild coaching staff was being widely circulated online.

Her handwritten urging of the Wild to make a trade for Leopold was never actually delivered to the team.

The veteran defenceman’s wife, Jamie Leopold, posted it on her Facebook page a couple of months ago. She told Twin Cities radio station KFAN she found the note on the counter at their home after her daughter left for school one day.

In the letter, Jordyn Leopold said she, her mother and three siblings have been lonely without their dad around.

“It has been since November and we cannot take it anymore,” she wrote.

Jamie Leopold told KFAN she “just started bawling” after she read it.

“It’s been a long couple months, but we’re really excited.”

Blue Jackets general manager Jarmo Kekalainen tweeted a picture of the letter once he saw it on the social media site.

“We wanted to do the right thing with Jordan Leopold. That’s what we had talked about the whole time. We knew that his family was in Minnesota and he was here alone. His family visited a few times,” Kekalainen said in Columbus after the deal was done.

“There is a human side, believe it or not, to our business. I think it’s great that he can go home, join his family. To see that letter, it’s pretty touching.”

Wild general manager Chuck Fletcher saw a photo of the note, too.

“After I saw it there was a pressure to close the deal, that’s for sure,” Fletcher said. “I’ve only spoken to Jordan once this afternoon, and he’s been away from his family for most of the year, and that’s hard and you’ve certainly got to feel for him, but I know he’s extremely excited to play for the Wild and to join our team. I think we’re going to have a very motivated player and a very excited family, so those are two very good things to have.”