She loved the outdoors, even taking her boys skiing as babies. At 50, she got on a bike for the first time and found a new love. 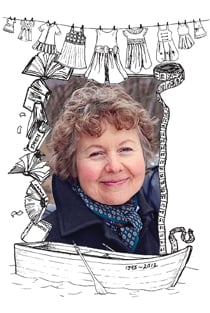 Elizabeth Ann Sovis was born in Toronto on Feb. 25, 1949, to Stephen and Judith Sovis. Her sister, Millie, who was almost 16 at the time, and had been longing for a sibling all her life, hurled her schoolbooks in the air and leapt up in celebration upon learning she had a sister. “She was such a charmer right from birth,” Millie says. “People were drawn to her like a magnet.”

Stephen and Judith had immigrated from Slovakia, and raised the girls in Toronto, where Stephen became a contractor and Judith worked as a seamstress. Judith and Millie both loved to sew for baby Elizabeth, and it was common to see eight or nine tiny dresses hanging to dry outside the house. When she was older, Elizabeth would use these same clotheslines as backdrops when she and her friends performed backyard plays. Elizabeth summered at the family cottage on Lake Simcoe, where she fell in love with hiking and gardening. One year, her father built her a wooden rowboat; she loved taking her mother out on the lake to fish.

At North York’s Willowdale Middle School, Elizabeth took a handful of classes with a shy, unassuming boy named Edmund Auger. They rarely spoke, but became good friends when they moved on to Northview Secondary School together. When hiking with a big group of friends they would often pair off to talk about books and ideas. At 17, they realized they were a couple. But, a few months later, when Edmund was offered a scholarship to Wilfrid Laurier University, they went their separate ways.

After graduating from the University of Toronto with a degree in modern languages, Elizabeth moved to France, then Switzerland. After two years in Europe she returned to Canada, and moved to the Yukon with plans to return to Zurich. Those plans changed while she was visiting her parents in Toronto. Edmund happened to call, and they made plans to reconnect. They fell back in love almost instantly, and moved to Quebec City together, where Edmund studied politics and Elizabeth practised her French. In 1974, Elizabeth wanted to pursue a teaching degree, so they moved to Fredericton, then on to Edmonton, where she took a job at a French-language school and later became a speech pathologist. There, she and Edmund, who taught politics at the University of Alberta, finally settled down. In 1978, they married. Their first son, Edmund Jr., was born two years later, followed by Gregory, then Richard.

Nothing brought Elizabeth more joy than exploring the outdoors with her family. Even when her boys were babies, she would take them camping and cross-country skiing, bundling them into snowsuits and baby carriers for family adventures in the wilderness. The couple would continue to take trips with the boys as they grew into men.

When Elizabeth was 50, she and Edmund discovered a new passion: cycling. Elizabeth had never been on a bike before, and at first was terrified of riding on the street, but after a few shaky rides, she fell in love with the sport. Soon, she and Edmund were planning weekend trips. A few years later they flew to England with their bikes to explore the countryside. They rode through streams and carried their bikes over fences, doing whatever they could to avoid the roads. Their meticulously planned routes kept them strictly on paths—though some were so worn and dangerous that Elizabeth would often say she planned to devote her retirement to developing better and safer bike paths back home in Alberta.

This past July, Elizabeth and Edmund set off for a cycling trip on Prince Edward Island’s Confederation Trail. They landed in Moncton, N.B., and on July 11, Elizabeth studied the next day’s route. She was dismayed to see that part of their route would take them on a secondary highway. Although Edmund assured her there would be little traffic, Elizabeth refused to cycle on a highway with no shoulders. So they loaded their bikes on a train to Sackville, N.B. On July 14, they crossed the Confederation Bridge into P.E.I., and had an idyllic ride along the Trans Canada Trail. But they soon found that a two-lane highway separated them from their hotel.

Elizabeth, who was always prepared for the unexpected, punched their location into her iPhone, to look up alternate trails. But there were none. The hotel was only four kilometres north, so Elizabeth hesitantly climbed back on her bike. Halfway through their ride, Edmund heard a loud bang behind him. Elizabeth had been struck by a brown van and died instantly. She was 63.