From the time she could walk, she was scrambling after her siblings. Inexhaustible and tough, she emerged as a rising cycling star. 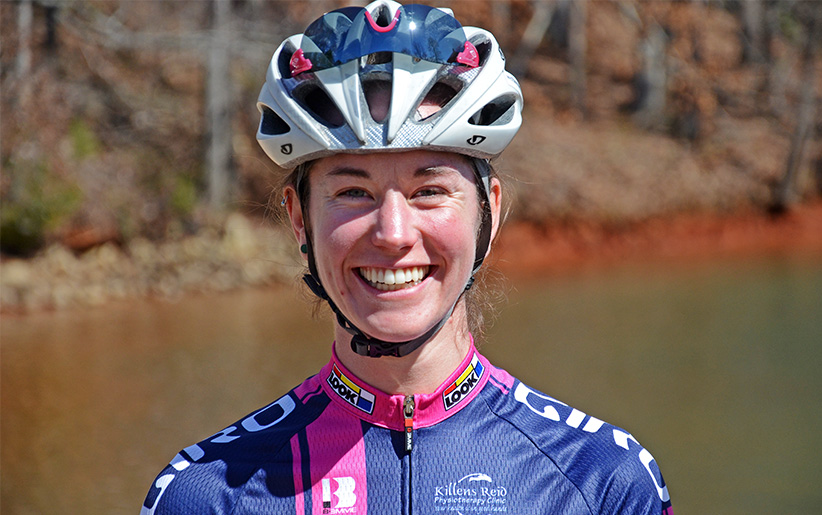 The family lived in the rural community of Apohaqui, on a small acreage that sloped down to the Kennebecasis River. From the time she could walk, Ellen was determined to keep up with her siblings as they climbed trees, built forts and skated on frozen fields. “Even if she was the youngest,” says Lily, “she would be willing to work twice as hard at the things we were doing.” Ellen was also close with her mother. “She adored my mother right from the word go,” says Lily.

The Watters children were all bookish and active. But it was Ellen who caught the sports bug most. At Sussex Regional High School she played basketball and soccer. She also got her lifeguarding certiﬁcate and became a swim instructor. “She just adored teaching the young kids. She’d feed off their excitement,” says Lily.

Graduating high school, Ellen studied kinesiology at the University of New Brunswick in Fredericton. She also started participating in triathlons. But it was cycling she grew to love. Ellen took time off from university—delaying graduation by a few years—to concentrate on competitive cycling.

Initially she competed mostly in time trials. But, in the past couple of years, she focused on stage racing and criteriums. The “crits,” as they are often called, are shorter than traditional road races and usually consist of a number of one- or two-kilometre laps on closed circuits. Races normally last an hour or less, and feature cash prizes called primes for winning speciﬁc intermediate laps.

Ellen began to win primes, which helped supplement her small income from working as a swim instructor or with a catering company back in New Brunswick. Seemingly inexhaustible, Ellen was what’s known in the cycling world as a “diesel engine”. An aggressive racer, she never gave up, says Lily.

In 2014 Ellen joined the Ottawa-based Cyclery Stephens (later re-christened Cyclery Opus). Vince Caceres owns the Cyclery, a specialty bike shop in Ottawa where Ellen sometimes worked. “We built our team on making the riders aggressive. [Ellen] would never just sit in the pack. She would make something happen.”

Ellen moved to Ottawa full-time last year. It was tough leaving her mother, who had always worried about Ellen training on roads. “But Ellen had this strength of conviction in what she was doing,” says Lily. “She felt, ‘I belong on the road as much as anyone. I have a road bike, I am a competitive cyclist. I belong there as much as any car so I am just going to go.’ ” But she was never reckless and her mother calmed down.

On the Cyclery Opus team, Ellen was the glue that helped bond the team into a family. She encouraged get-togethers; a beer or ice cream after training. A cinephile who loved indie flicks, she often found movies to watch with her teammate and roommate, Emily Flynn; they met at a Cycling Canada camp in 2013.

The past year, says Flynn, was Ellen’s happiest. Though usually full of life, Ellen sometimes endured quiet bouts of depression. She related to Olympic cycling and speed-skating medallist Clara Hughes, who, in 2012, revealed her own struggles with depression. When Hughes rode through Sussex in 2014 as part of her mental health campaign, Ellen stood by the roadside cheering Hughes on.

But she’d met a new partner in May and was planning to move in with her. And she was winning important cycling races, including, last spring, the 80.5-km Kugler-Anderson Tour of Somerville, in New Jersey. In October, Ellen signed her first professional contract to ride with the widely respected U.S.-based Colavita/Bianchi team for the 2017 season. Soon after that, says Flynn, a box came for Ellen from Colavita, a U.S. maker of Italian foods. It was full of Colavita olive oils and pastas —a welcome gift from her new team. “It was like Christmas,” says Flynn. “She was so excited.” It wasn’t just the food, of course, notes Flynn. “The dream is to get paid to ride your bike.”

On a sunny Dec. 23 afternoon, Ellen was on a training ride in Sussex when she was struck from behind by a Volkswagen Golf travelling the same direction. She died in hospital from her injuries on Dec. 28. She was 28.