Every cuisine from Chinese to French has transformed itself. Why not Italian? 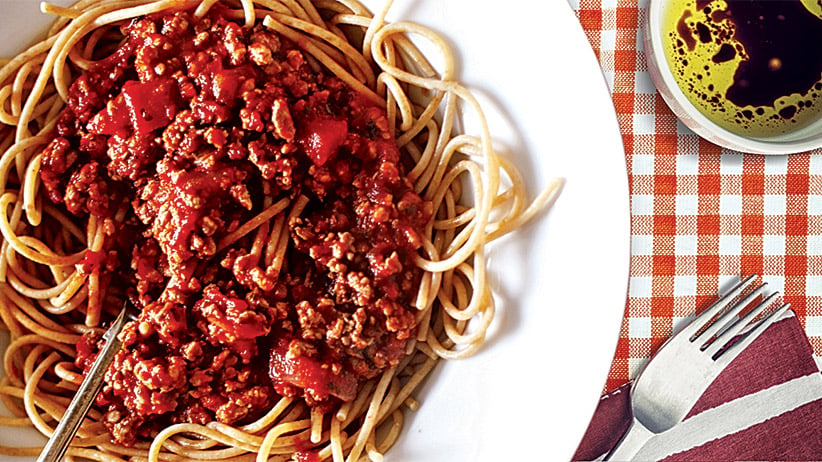 But new Italian? Fuhgetaboutit. Massimo Bottura, hailed by some as Italy’s ﬁnest chef today, knows it all too well: Just try reinventing lasagna and you might as well blaspheme your grandmother’s cooking.“In Italy, there are three things that are untouchable: one is the Pope, the other is the national soccer team and the third one is the food,” Bottura said on the phone from New York while promoting his ﬁrst cookbook, Never Trust a Skinny Italian Chef.

Bottura’s restaurant La Francescana is in Modena, in Italy’s great culinary region of Emilia Romagna—home to ragu alla bolognese and parmigiano reggiano, two culinary icons that come together on Bottura’s menu in a dish he calls “the Crunchy Part of the Lasagne.” Like his other fanciful menu items such as “There’s An Eel Swimming Up the Po River” or “Memory of a Mortadella Sandwich,” the lasagne dish is a work of edible modern art: crunchy triangles of spinach pasta and parmigiano crackers placed over dollops of ragu and béchamel with a stripe of tomato terrine to frame the plate. “It tastes like the best part of the lasagne, those burnt parts we all fought over,” he says. Why not make a traditional lasagne? “I want to bring the past into the future through a critical point of view, not a nostalgic one,” he says.

Is nostalgia stunting the evolution of Italy’s cuisine? While French, Chinese and other culinary cultures have gone through seismic changes, there hasn’t been much rebellion in Italian food beyond the Americanization of classics, like spaghetti with meatballs.

Toronto chef Rob Gentile of the acclaimed Buca restaurants appreciates that sense of nostalgia—he waxes on about the coffee and aromas of tomato sauce from his childhood—but he himself is an innovator, known for contemporary interpretations of classics such as pasta with lamb’s intestines. He argues there’s more than sentiment behind a reluctance to innovate: “That real Italian tomato sauce? It’s in knowing how to make a wicked tomato sauce that is at the root of being able to do more technical things.”

Roberto Martella, who has been running traditional Italian family restaurant Grano in Toronto for nearly 30 years, contrasts the desire for tradition in Italy’s foods with the revolution  in the wine world. “A generation ago winemakers broke free from tradition with the super-tuscans, the tignanellos, the sasiccaias. It’s very important to have someone like Massimo Bottura to push the envelope the same way you have an Angelo Gaja who has a $500 Barbaresco wine.” (Gaja, a celebrated but controversial member of an esteemed Piedmont winemaking family, is credited with many innovations in his native region, including single-vineyard wines.)

La Francescana has earned the top rating of three Michelin stars and third place on S. Pellegrino’s esteemed “world’s best 50 restaurants.” Yet some still revile Bottura’s boldly avant-garde menus. “We have these critics and they call me many names, but now some call me maestro,” he says.

Undaunted, he’s pushing the envelope further, breaking down an age-old approach to cuisine based on regionalism. There is arguably no “Italian cuisine,” but instead the dishes of Sicily or Piedmont, Rome or Venice. Bottura’s cuisine is a mash-up of several. Ever a cook, he quickly recites a recipe, saying it’s brand new and not yet named but something he has invented for his North American book tour. It involves mixing a pasta from Liguria (spaghetti with pesto) and another from Naples (spaghetti with clams). “Is this Italian food or not?” he asks, with a ready answer: “Yes, but Italian food in a new way.” Them’s ﬁghting words.