A soccer star who once narrowly avoided a tragic accident that claimed his teammates, he left Peru for a better life 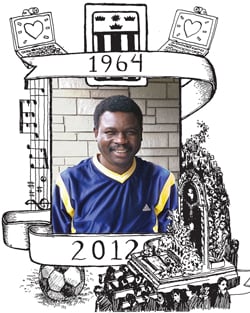 Enrique Arturo Arenaza León was born on Dec. 21, 1964, in Lima, Peru. His father Guillermo was a construction worker. His mother, Rosa, occasionally cleaned homes for a living but mostly stayed at home, raising their nine children, of whom Enrique was the fifth.

He was a strong boy with an athletic bent. After primary school in Villa el Salvador, at the southernmost tip of greater Lima, Enrique moved to the heart of Peru’s capital to attend the Alfonso Ugarte secondary school, where he focused less on books and more on his passion: soccer. He was supremely talented. By 17, Enrique was playing professionally, and in the mid-1980s, after graduating high school, he made the first division Alianza Lima soccer club, one of the country’s most prestigious teams. Soccer and Alianza were in his blood. Two of his uncles, Pedro Pablo “Perico” León and José María Lavalle, had played for Alianza and later for the Peruvian national team in two World Cups.

As Enrique was reaching the top of his game, however, Alianza was struck by tragedy. On the morning of Dec. 8, 1987, Enrique was at eastern Peru’s Pucallpa airport, arguing with officials to let him board a small Fokker plane on which his teammates awaited. They were returning home victorious; by defeating Pucallpa 1-0, they’d captured first place in the league. Enrique, however, had slept in and arrived late. He could not have imagined his luck. Just 10 km shy of Lima, the aircraft crashed into the Pacific Ocean, killing the 43 passengers and crew, including Enrique’s teammates, coaches, and a group of cheerleaders. Only the pilot survived.

Badly shaken, Enrique immediately distanced himself from soccer. Without a post-secondary degree, he worked odd jobs. At 30, Enrique was also still single, but then, one night, he met Patricia Aguilar, a woman seven years his senior, at a friend’s birthday party. “He asked me to dance; he was so polite, a true gentleman,” she says. “Within a day, I felt like we had been best friends forever.” Enrique soon moved to her hometown of Comas, where they spent the next 18 years. In 2006, they had a boy, whom they named Brad—“like Brad Pitt,” says Patricia. She loved the actor, and wanted to name their son for him. “Enrique thought I was joking,” she says, “but I wasn’t.”

Enrique loved dancing salsa and singing, and used to sing Mi niña bonita, by Lucho Barrios, to Patricia. He had become a loving father, a family man, and a food lover, according to Carmen Aguilar, Patricia’s aunt. She used to make him all his favourites: ceviche, ajiaco (chicken and potato soup), rice tacos. As a devout Catholic, he helped carry the “Lord of Miracles,” a venerated painting also known as the “Black Christ” that is carried through central Lima each October in one of the world’s largest religious processions.

He became a taxi driver, and started a business selling chickens with a friend, occasionally playing soccer for money. But with his family and obligations growing, he struggled. Patricia worked as a geriatric nurse, but didn’t have a stable income. Three years ago, Carmen recommended him to the son of a friend, who was recruiting workers for a chicken vaccination company in Ontario.

In December 2009, with a visa in hand, Enrique moved to Kitchener. Two weeks later, he sent the earnings of his first paycheque to Patricia; he’d never miss a payment. The money was good, but not great; Patricia sometimes worked selling fruit at the local market to earn a little more. “He liked Canada,” she says. “Everyone is kind,” he told her. Enrique made friends, mostly fellow Peruvians, and played soccer on weekends.

The separation was hard, but Skype kept them together. “We would be online every minute we could,” says Patricia. “We would eat meals together; we would fall asleep together, hugging our computer screens.” The couple never wed, but in April, Enrique planned to return to marry his niña bonita; he hoped eventually to bring his family to Canada with him.

On Feb. 6, just two months before they would finally be reunited, Enrique and 12 fellow workers were returning from Hampstead when their driver missed a stop sign and the van was T-boned by a flatbed truck. A miraculous coincidence had saved his life in 1987. This time, Enrique was killed with his team, one of the 10 passengers who died. He was 48.