A B.C. mountain goat was the unlikely champion in a match against a grizzly

This mountain goat proved that in nature, as in human society, the underdog always has a fighting chance 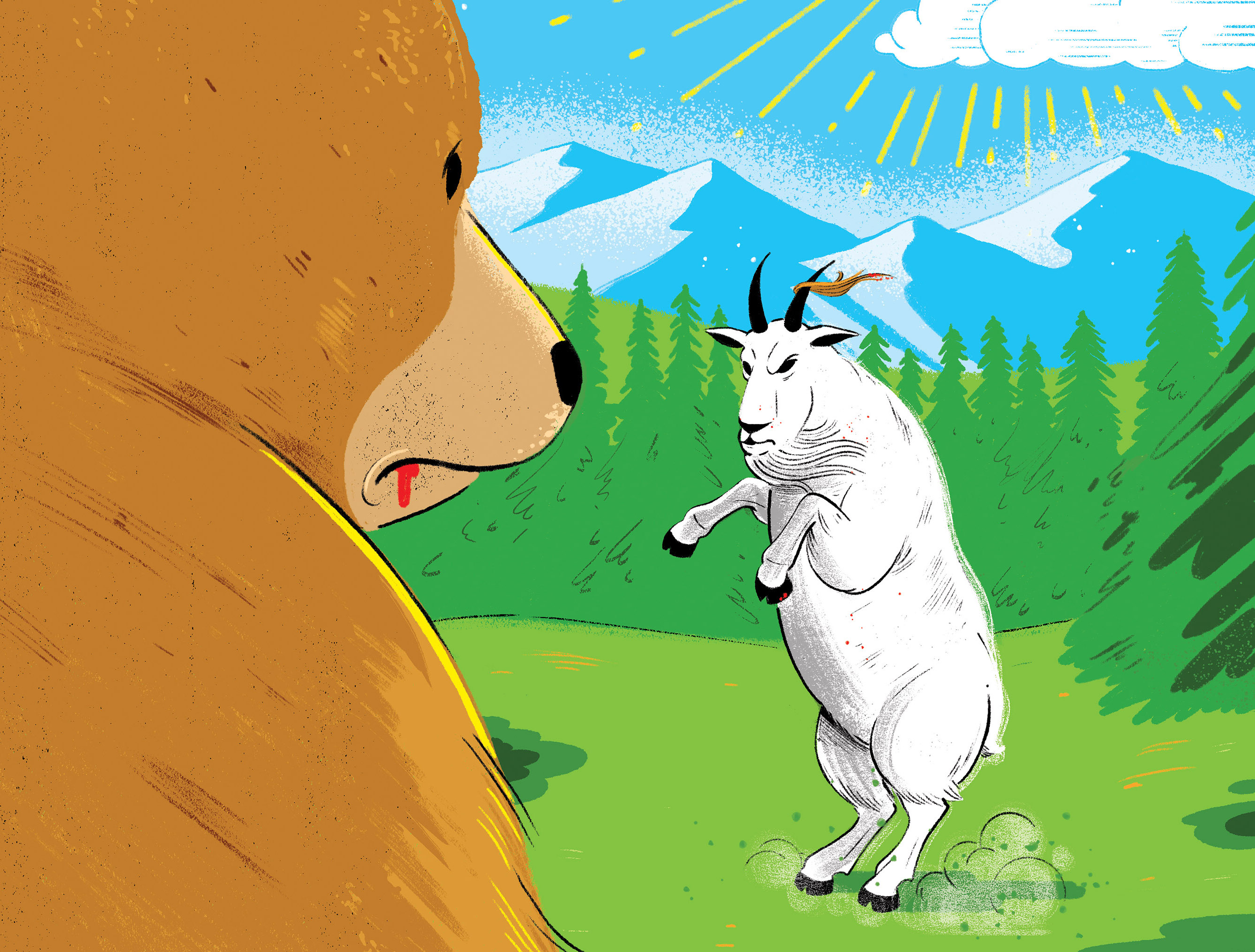 It’s a late summer day in the British Columbia Rockies. The skies are clear and the air is crisp on the eastern shoulder of Mount Burgess. It’s near the top of a mountain pass, along a 13-km trail frequented by human visitors to Yoho National Park, that our rivals meet for the first time in nature’s ultimate death match.

A dramatic fight ensues that Maclean’s imagines looks something like this.

The metaphorical bell rings as the bear closes in on her adversary. It’s go time. She lunges toward the goat, launching herself onto her target’s back. She almost gets a grip on the animal’s shoulders. Almost pins it down. Almost sinks her teeth into its neck. Almost.

But the goat springs into defensive action. It bucks its head and connects with the grizzly’s body, its horns puncturing first one armpit and then, as the animals tangle—the bloodied bear now less sure of victory—the other.

As the bear tries to gain the upper hand, there’s another jerk of the ungulate’s head and its glistening horns catch the champion under the chin. In an instant, it’s all over. The bear drops dead. The unlikely victor strides off the subalpine stage. Its prize is to live another day.

Within about 24 hours, two humans come upon the carcass. They turn back and inform the park of their discovery as soon as they get a cell signal. “Trail was great,” reads the apparently corresponding review for the Burgess Pass trail on alltrails.com dated Sept. 4. “We couldn’t make it to the summit because there is a dead bear just off the path. . . We weren’t going to be stuck on the wrong side of whatever was going to show up to eat it.”

MORE: The sound of too much noise

The hikers did the right thing, says David Laskin, a Parks Canada wildlife ecologist based in Lake Louise, Alta. Parks officials had a helicopter airlift the carcass from the trail out of concern for other Labour Day weekend hikers. (If another bear came upon the carcass, it would defend that food source “aggressively.”)

Though staff weren’t immediately sure what happened to the bear—one of about 24 to 30 grizzlies in the park as of 2020—a necropsy confirmed that its injuries were consistent with “an unsuccessful predation attempt on the mountain goat,” Laskin says. There was a wound in each armpit, a punctured lung and evidence of the likely fatal blow under the chin, where the horn of a goat travelled into the brain.

“That would’ve killed it instantly,” Laskin says, adding that it’s “exceedingly rare” for the prey to kill the predator in self-defence. “I’m sure there’s some type of Tolkien analogy here akin to the dragon with its tiny weakness,” he says.

There is no way to know which individual in the park’s population of hundreds of mountain goats is responsible for the feat. Grizzlies typically go for smaller, weaker animals, so it could be that this was a female goat, or nanny, closer to the weight of the smallish 70-kg bear, rather than a billy goat, which can weigh up to 125 kg.

“Our bears in the Rockies usually have diets that are largely vegetation. So when they do hunt it will be opportunistic, most likely on smaller animals, or weak or sick ones,” Laskin says. Even so, it’s always a risk. Mountain goats and other large ungulates are neither weak nor defenceless. Predators get injured more often than we think.

It’s another reason to follow Parks Canada’s advice and give a wide berth to the seemingly innocuous mountain goats you see near the trail. “These are large wild animals that can easily hurt someone if they feel threatened or you’re just too close,” Laskin says. And, in Yoho, they have a stone-cold assassin among them. The greatest of all time.

This article appears in print in the December 2021 issue of Maclean’s magazine with the headline, “Go get ’em, kid.” Subscribe to the monthly print magazine here.