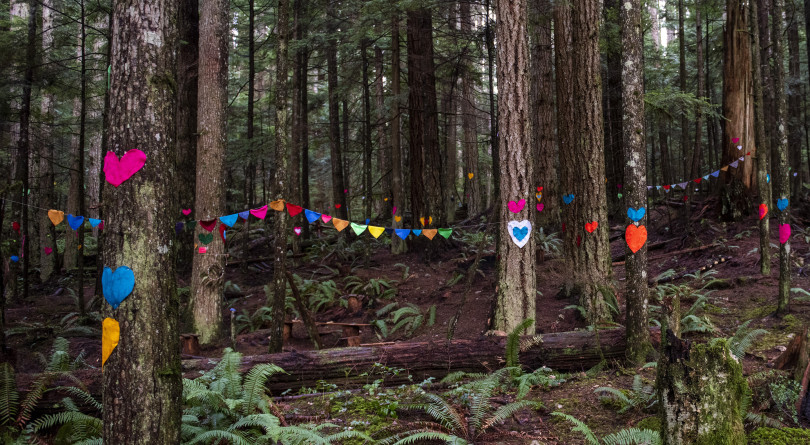 Roberts Creek, B.C. - A group trying to save areas of the Clack Forest hike the area. (Photograph by Jimmy Jeong)

Bright spots of colour dot Clack Creek Forest on the Sunshine Coast in B.C. The felt hearts affixed to the trees are visually striking symbols of protest as the area awaits the axe—quite literally. Logging rights to the forest were auctioned off to Squamish, B.C.-based Black Mount Logging in May 2019, and clearcutting would thwart the local community’s hopes to expand Mount Elphinstone Provincial Park. Clack Creek is not technically “old-growth,” a designation for forests with trees 250 years and older that affords them provincial protections. Rather, its oldest trees are around 160 years old. But the ecologically diverse habitat for elk and plant species deserves to be protected and given the chance to mature, says Ross Muirhead of the conservation group Elphinstone Logging Focus (ELF), which started the heart campaign. ELF hopes the protest will persuade the province and company of the area’s significance. The hearts also serve as a reminder that protectors of the forest are on alert; ELF has established a watch station where community members are keeping an eye out for logging activity so they can spring into action if love doesn’t prevail.

UPDATE, Jan. 20: On Jan. 12, Black Mount Logging began its project in Clack Creek, clearcutting about half a hectare before an ELF member entered the Active Falling Zone, disrupting operations and causing the logging to stop. The company is seeking an injunction to have an ELF roadblock removed.