I ain’t afraid of no ghost fleas

Scientists are studying a strain of translucent, one-eyed zooplankton that comes out at night. "When you look at live ones under a microscope, they can spin their eye to look at you. You’d think the organism is possessed.” 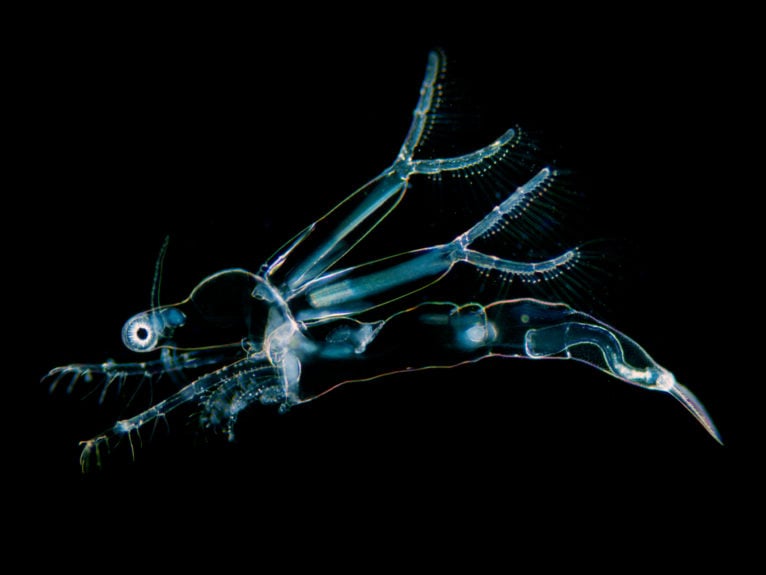 The best time to catch a walleye on Katepwa Lake is early in the morning. When the sun gets higher, the northern pike or perch start going after bait in the lake near Fort Qu’Appelle, Sask. Then, come suppertime, the walleye are biting again.

But it’s under the nighttime sky that a team of researchers from the University of Regina stalked its obscure quarry in this Prairie water body: a strain of translucent, one-eyed zooplankton scientists believe is responsible for elevated mercury levels in Katepwa’s fish. Their biological name is Leptodora kindtii, but among the researchers, they are known by a more evocative appellation: “ghost fleas.”

Here was the mystery: lakes on the Prairies often look a bit green because of a higher algae content—“very typical on the Prairies because we have very fertile soil,” says Britt Hall, the University of Regina biogeochemist who led the study. And fish from lakes with lots of algae typically have lower mercury levels because there’s so much food, diluting the amount of mercury they consume.

“It’s been an understanding that if you have a lake with a lot of algae, you might not need to worry about a fish consumption advisory,” Hall adds. “However, there are a few lakes here on the Prairies with lots of algae that have concentrations of mercury that are quite high.”

Katepwa counts among them, and a 1997 study of the lake deepened the enigma, revealing that yellow perch in its waters who fed at night had nearly double the mercury concentration levels as yellow perch who ate during the day. Two decades later, Hall decided to take a closer look at those ghost fleas, and figure out why.

She had to look very closely indeed. The species is small, just over one centimetre long, and virtually invisible. Hold up a glass of cloudy water with a ghost flea in it and you probably wouldn’t spot it—save, perhaps, for its lone eye, says Peter Leavitt, a University of Regina ecologist and a co-author of both the 1997 study and the most recent one. “They can rotate the eyeball in any direction, like it’s on a loose tether,” says Leavitt, who came up with the nickname. “When you look at live ones under a microscope, they can spin their eye to look at you. You’d think the organism is possessed.”

Prairie lakes offer perfect conditions for ghost fleas, according to Leavitt. The lakes are relatively big, with a good amount of algae, and ghost fleas can find refuge at their bottoms, where low oxygen levels keep away the fish that prey on them. Trouble is, in the time they spend there, Leptodora kindtii accumulate methylmercury in their systems.

The presence of mercury in lakes and aquatic life is an old problem. When humans burn coal or oil, mercury is released into the air that eventually comes down in raindrops or due to gravity. Once in the waters of Saskatchewan lakes, it sinks to the sediment at the bottom, Hall says, an environment where inorganic mercury transforms into methylmercury—a neurotoxin that is harmful to humans.

None of this would be of much consequence if the mercury stayed at the bottom. But come nighttime on lakes like Katepwa, the study notes, ghost fleas rise to the surface for air and to feast on smaller zooplankton. Tiny as they are, they aren’t smooth swimmers, using their huge antennae as a kind of set of oars. Says Leavitt: “It’s like a clumsy boat paddling through the water.”

Easy pickings, in short, for small fish who can sense their movement. But those night-snacking fish accumulate the methylmercury from the ghost fleas, passing it on to larger fish, like perch. Each step up the food chain increases the concentration, ultimately posing a risk to humans. Consumption of mercury-heavy fish by young children or pregnant or breastfeeding mothers can cause developmental problems in the youngsters.

The result, says Jules Blais, an environmental toxicologist at the University of Ottawa who was not part of the study, can be a fish consumption advisory that has economic consequences for people in the region, even if the overall health risk is low: “That’s just bad PR if you hear the mercury in these fish is high.”

READ: Why Canadians have a thing for mythical lake monsters

As it stands, anglers at Katepwa Lake can safely consume upwards of 16 servings of pike, or eight of walleye, from the lake over a month, according to provincial guidelines last updated in 2015, as long as the fish is shorter than 40 cm. The bigger the fish, the fewer meals recommended. For pregnant or breastfeeding women and young children, it’s eight meals with pike or four with walleye.

This might work fine for casual fishers, but Blais warns it could become a problem for people in the area—especially First Nations—who rely more heavily on subsistence fishing. If the mercury level in fish rises above a half part per million, the standard maximum permitted by Health Canada in retail fish, “it is likely some advisory will be put in place,” Blais says. “Many fish are already pretty close to that level. So a little boost could make a difference.”

That’s why Hall suggests those who test for methylmercury levels in fish go out at night, as well as during the day, to ensure their samples include those feeding heavily on Leptodora kindtii. Ghosts, after all, only come out after dark.

This article appears in print in the September 2020 issue of Maclean’s magazine with the headline, “I ain’t afraid of no ghost fleas.” Subscribe to the monthly print magazine here.