The 16-year-old Swede lent her voice to Albertans who care deeply about climate change. And make no mistake, there are a lot of them. 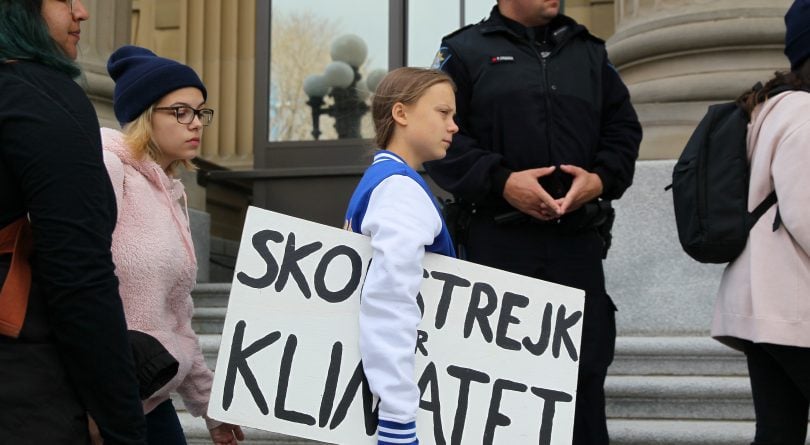 Before Greta Thunberg rode an electric car into Alberta, many celebrity activists before her had arrived to demand climate action: Leonardo DiCaprio, Neil Young, Jane Fonda and others. There’s a significant difference that has nothing do with the age of the Swedish teen, or that, unlike many an entertainment figure leveraging fame for a virtuous cause, the climate fight is Thunberg’s calling card.

What’s new this time—and detractors like Premier Jason Kenney et al should take note—is that Thunberg isn’t putting on a solo show for the cameras. She led a crowd. An estimated 4,000 at a youth- and Indigenous-led rally in downtown Edmonton. And this was the second climate protest of this scale in the city in as many months. The actors’ and musicians’ method was to draw attention to oil sands. Thunberg draws attention differently, declaring that she’s far from alone in raising the alarm about an overheated planet—and that’s the case even in Canada’s petro-province.

To be sure, Alberta is still Alberta, and the province writ large isn’t on Team Greta. It’s where you’re most likely to pass by someone clad in an “I (heart) oil and gas” T-shirt. Polls have consistently shown Albertans are among the Canadians least likely to worry about a climate emergency—yet the regional difference of attitude isn’t nearly as significant as a probable Conservative sweep of the province might imply. While 26 per cent of Canadians say climate change is the most important election issue, climate also outranks any other issue in Alberta: it’s the top concern for 20 per cent of residents, an Angus Reid Institute survey suggests. That’s one-fifth, in a province of 4.3 million people.

Last year, Maclean’s reported on Alberta’s anti-pipeline movement, struggling for audience within a province where all elected politicians (and nearly everyone else) want to see the Trans Mountain pipeline expansion build. That hasn’t changed, one year later, according to another ARI survey,  which last month indicated a mere four per cent of respondents in the province oppose the project. Though an organizer tried leading the crowd outside Alberta’s legislature in a chant of “Get up, get down, keep the fossil fuels in the ground,” this demonstration and past ones in Alberta have dwelled little on stopping pipelines, if the term gets mention at all.

Much of Albertans’ climate concern tends to be broad, in the mixed energy-plus-economy vein that the Liberals and Justin Trudeau have tried to sell during this campaign. Thunberg might be disheartened to know that many in the crowd listening to her speak likely support continued oil sands development, albeit grudgingly in some cases. And how few people who marched with her are as ready to make the personal sacrifices she has made in the name of saving the planet, like going vegan and avoiding air travel. 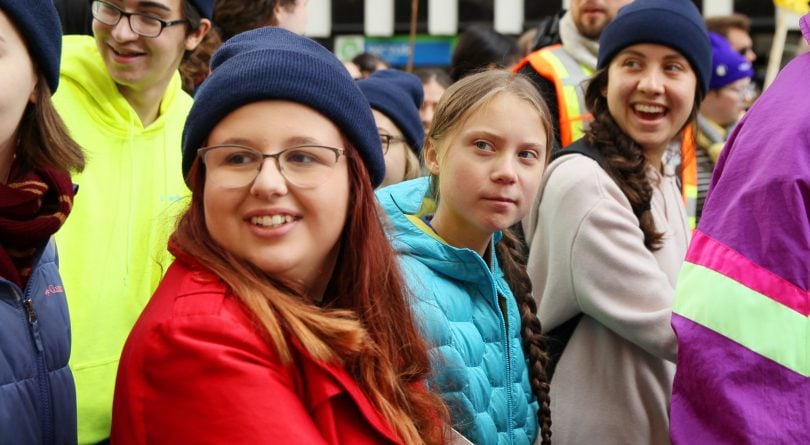 On Friday, the 16-year-old Swede’s speech laid out an urgent, science-driven case to rapidly draw down emissions, especially in more advanced countries. It was virtually bereft of specific solutions, especially ones that would pique emotions in an oil-producing region, and it steered clear of anything election-related—a wise move given recent sensitivities around foreign interventions in democratic campaigns. “The climate and ecological crisis is far beyond party politics, and the main enemy right now should not be any political opponent,” Thunberg said. “Because right now, the main enemy is physics.”

But judging by the young crowd’s cheers for rally speakers who were critical of oil development, the incoming generations of Alberta voters may be more receptive to the economic sacrifices that so many adults in the province worry will wreak havoc on jobs.

The impact of climate change impact on Indigenous lands and peoples took centre stage at Friday’s protest, where there were warnings of stolen land and threatened water. Yet here, too, is a notable split in Alberta. Many First Nations reserves are oil developers themselves, and many Albertan Indigenous communities and leaders are behind groups jockeying to buy Trans Mountain.

In this province, large contingents young people are getting into demonstrating for climate causes, but it remains to be seen if it their activism will coalesce around specific action calls. Unlikely: big gatherings telling leaders to cancel the approved B.C.-bound bitumen conduit. More of a chance: visible pushback against attempts by the Kenney government—and/or a potential Andrew Scheer government—to weaken current carbon emissions plans. Many may condone further oil sands activity. They aren’t as keen on backwards policy steps.

Past celebrity visitors came, made a media spectacle, generated a few news clips and a bunch of controversy, then flew out of Alberta. Greta Thunberg, by stoking a movement—yes, even in Alberta—stands to leave something legitimate behind.