Conrad Bérubé has already taken down one nest of the aggressive hornets that can wipe out defenceless honeybees. And he'll go to war again. 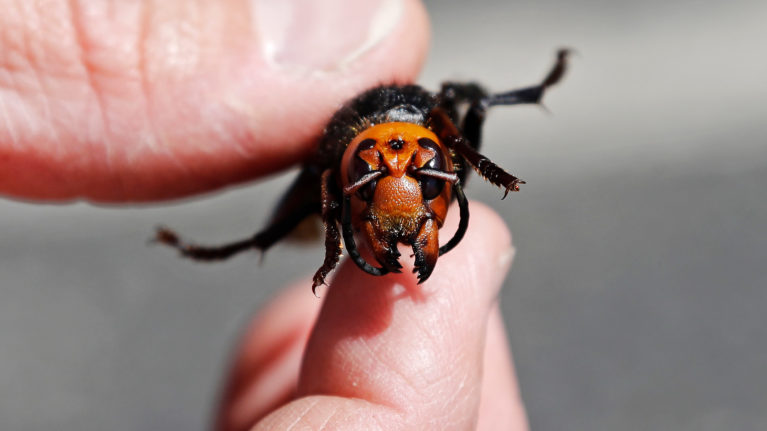 In Nanaimo, B.C., Conrad Bérubé keeps a memento that the Western world largely figures for a monster. One of the few Canadians to encounter the Asian giant hornet on domestic soil, he is a guardian of sorts—at least to Vancouver Island’s honeybees. When a colony of the creatures cropped up last year in his hometown, the trained entomologist volunteered with members of a local beekeeper club to neutralize the nest. The stings left him with two lentil-sized marks, one on each thigh, that tell half the story. “It’s like a red-hot tack being driven into the flesh,” Bérubé recalls.

Sitting on his workbench, the preserved carcass of the colony’s queen spells out the rest. “I kept her as a trophy,” he says.

Nanaimo was ground zero for the hornet’s foray into North America last summer, when Canadian and international experts identified several specimens as Vespa mandarinia, the scientific name for the invasive species that on this continent has become known as the “murder hornet.” In May of this year, others were spotted in the Lower Mainland and northwest Washington state, suggesting they’ve overwintered to become more than a one-year wonder. Depending on their caste within a colony, they range in length from 3.5 to five centimetres, and pack menacingly large mandibles often used to decapitate honeybees.

Tim Lawrence, an apiculturist with Washington State University Extension, notes that the “murder” moniker (now the bane of many entomologists) is a misnomer. While the species is reportedly responsible for dozens of deaths a year in Japan, he says, it tends to reserve aggression for those who approach its nests or the occupied hives of honeybees—the real victims of this story—which the hornets besiege to harvest brood for food.

As few as 15 hornets can decimate a colony of more than 25,000 bees in a few hours. Asian honeybees have adapted a defence against these strikes by swarming, heating and suffocating the invaders. But Western honeybees have no such strategy, making the hornets a threat to both hobby hives and those in the wild. “Yes, we should be concerned,” Lawrence says, before adding: “But you can sleep at night. They’re not going to be chasing school buses down the road.”

Certainly Bérubé, a B.C. pesticide compliance officer in his day job, was undaunted when members of the beekeeping club discovered a nest burrowed in a wooded area near Nanaimo’s Honey Drive. Dressed in a beekeeper’s veil, he armed himself with a carbon dioxide fire extinguisher to stun the insects and a handheld vacuum to sweep them up.

That’s how a nest of about 200 adult hornets met its unmaker on the night of Sept. 18, 2019, but not without a fight. Squatting at the nest entrance, Bérubé realized “at about the same time the hornets did” that the vacuum nozzle was too small to receive them. “I got stung four times across the top of my thighs, where the fabric was stretched tight,” he says. Two stings drew blood and became the war wounds he wears today. The hornets hit him twice more on the ankle, and once in a calloused finger where one left a quarter-inch-long lancet.

Still, keeping calm, Bérubé found a rhythm, firing the extinguisher in bursts to disable waves of workers before drowning them in the alcohol he’d brought along to preserve them. After exhausting the colony’s defences, the team unearthed a nest comprising several cardboard-like combs the size of dinner plates, housing hundreds more immature insects and the queen.

Bérubé thought he’d thwarted the threat in Canada, but before the year was out there were confirmed sightings of more hornets on the mainland, in White Rock, B.C., and just over the Canada-U.S. border in Blaine, Wash. The latest, on May 15, was spotted and killed in nearby Langley Township, shortly before authorities in Washington state received photos of what appears to be their third, also near Blaine.

B.C.’s provincial apiarist, Paul van Westendorp, is keeping the latest Canadian carcass on ice while awaiting an autopsy to learn if it’s a queen. This one, however, was found far enough from White Rock to suggest a separate nest in the Langley area.

How the insects reached North American shores remains a mystery. DNA sequencing traced the Nanaimo and Blaine hornets’ origins to Japan and South Korea, respectively; van Westendorp says it’s possible a reproductive queen stowed away aboard a container vessel. As for whether the species can establish itself on this continent, he offers reassurance. Mountain ranges, a dry Okanagan Valley and the vast prairie present formidable obstacles to a species that prefers warm, moist climates. What’s more, two seasons alone don’t make for a foothold. “A Hollywood image of marauding insects overrunning the countryside—that is what Hollywood enjoys,” van Westendorp says. “The reality is totally different.”

Still, the experts are fairly certain the West Coast can expect to see more hornets, which are likely preparing for seasonal raids later this year. For the sake of B.C.’s bees, Bérubé hopes the species stays in check. If more surface in his area, he’s looking forward to taking another stab at them. He’s already got one hive under his belt, and the scars to prove it.

This article appears in print in the July 2020 issue of Maclean’s magazine with the headline, “Stinging in the rain.” Subscribe to the monthly print magazine here.