Almost 30 years after the Manolis L sunk off the coast of Newfoundland in 1985, locals noticed signs of an oil leakage. Five years later, the feds finally stepped in to clean it up. 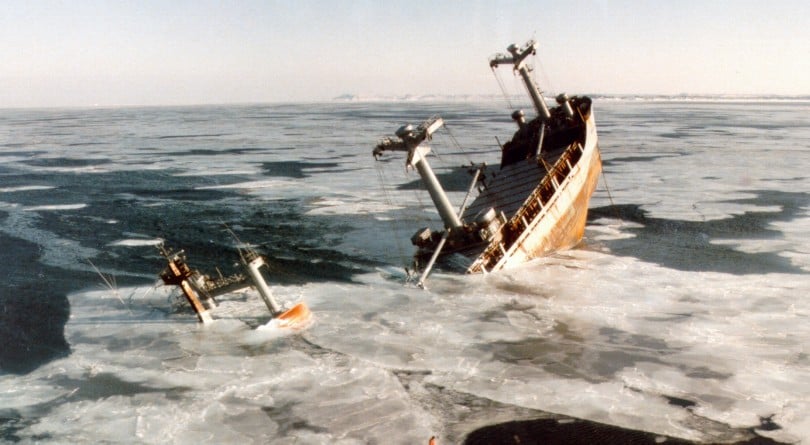 On Jan. 18, 1985, three days after the Manolis L ran aground on Blowhard Rock off the northeast coast of Newfoundland, Reg Hynes was sitting in his rocking chair after breakfast, looking out the picture window of his living room on Change Islands, when he spotted a change in the horizon.

“Boy, she’s moving!” Hynes called out to his wife, Winnifred, who was still in bed. The former telegraph operator and postmaster, who was 55 at the time, still recalls the spectacle vividly: “She went down in about two or three seconds. It was fast.”

Hynes was likely the only one to witness the shipwrecked bow of the Liberian-flagged Manolis L slip under the icy North Atlantic and sink 70 m to the ocean floor. It flipped on impact, cracking both ends of the ship. On board was a catastrophe in the making: 462,000 litres of oil, plus 60,000 litres of diesel fuel.

For years, the Manolis L lay virtually dormant until a ﬁerce storm in the spring of 2013 disturbed its watery grave. Residents began seeing signs that oil might be leaking from the ship—oil-soaked seabirds washed up on shore; a telltale sheen on the water. Fishermen found their ropes blackened with greasy oil, while duck hunters were forced to dump, on average, ﬁve of their six-duck quota because the birds’ feathers were saturated with oil.

That year, a Canadian Coast Guard investigation found that two cracks in the hull of the ship—one a foot long, the other nearly two feet—were leaking black droplets of oil.

For the next four years, the Coast Guard monitored the sunken ship and put in place a series of stopgap remedies that failed to plug the oil seeping out of the ship’s hull.

Many of the citizens of Change Islands and those in nearby communities around Notre Dame Bay were up in arms. Mayors from communities spanning the pristine bay known as “iceberg alley” joined a chorus of voices calling for more remediation from the federal government.

“Our entire bay was at stake,” says Carolyn Parsons, co-chair of the Manolis L Citizens Response Committee, which she says ﬁnally got the federal government’s attention in 2015. “We were really concerned about the ﬁshery, the tourism, everything in that area, and we were hitting brick walls trying to pass along common sense that this was a major problem. We were getting evasive answers and being told that this wasn’t happening, that we weren’t seeing what we were seeing. That was very frustrating.”

Finally, this year, the federal government announced a plan to remove the oil from the wreck and awarded Ardent Global, a Texas-based salvage company, a $15-million contract for the cleanup.

The next step was a ﬁrst in both scale and complexity for the salvage industry and the Canadian government, says Anne Miller of the Canadian Coast Guard, incident commander for the operation. The challenge was to heat the oil, which had the viscosity of hardened molasses in frigid, 1° C temperatures, to between 15 and 20° C, and to pump it 70 m to the surface solely with the use of remotely operated vehicles (ROVs). “I don’t want to leave the impression that this was a walk in the park,” says Miller, a native of nearby Fogo Island. “There were a lot of teething pains and a lot of frustration at the front end of it with equipment. We were a couple of weeks behind schedule, but when things did start working, they started working really well.”

Two seven-foot ROVs were deployed to the Manolis L by pilots in a control centre on an Ardent salvage vessel. They manipulated a custom-made arm dubbed the “barnacle buster” to scrub and buff areas of the ship’s hull to make it easier to drill holes. 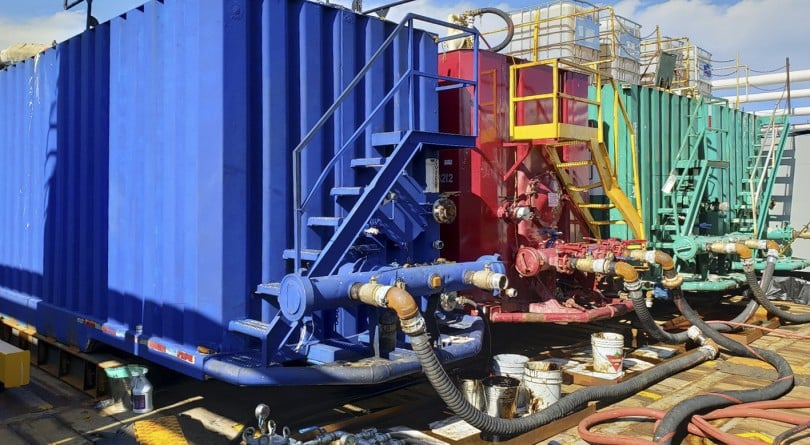 Oil from the Manolis L is pumped to the surface and stored in these large tanks for proper disposal. (Canada Coast Guard Atlantic)

Boilers sitting aboard the deck of Ardent’s vessel generated steam, which was piped down to the wreck to heat the water and oil, which become fluid, making it possible to pump it to the surface. The biggest tank contained 60,000 litres of oil and took 24 hours to heat.

The removal crew of 140 worked 16-to-18-hour days for weeks in August and early September, and after the last tank had been flushed, Miller says it felt surreal. “There were a lot of big smiles, a lot of big grins,” she says.

“It was, ‘Yes! Done!’ There were a lot of congratulatory messages between everybody, but everyone was so tired.”

How much oil was recovered from the wreck, and the amount that escaped during the operation (the Coast Guard has described it as small), was still being calculated in late September, along with the total cost of the operation.

So far, the wreck has cost the federal government $23.3 million. Taxpayers are on the hook because of provisions set out in Canada’s Marine Liability Act, which restricts cost recovery for marine oil pollution claims to ﬁve years from the ﬁrst pollution occurrence. In the case of the Manolis L, that’s nearly three decades too late.

Thirty-three years after it sank just outside their picture window, Hynes and his wife Winnifred are amazed to ﬁnally hear the wreck is cleaned up. “It’s a great thing,” says Winnifred, 82. “But it should’ve been done years ago.”