How this baby otter is helping keep Vancouver Aquarium afloat

Other otters have won hearts and donations for the aquarium, but this is no ordinary Joey. The pup's 24/7 livestream made him a social media sensation during the pandemic. 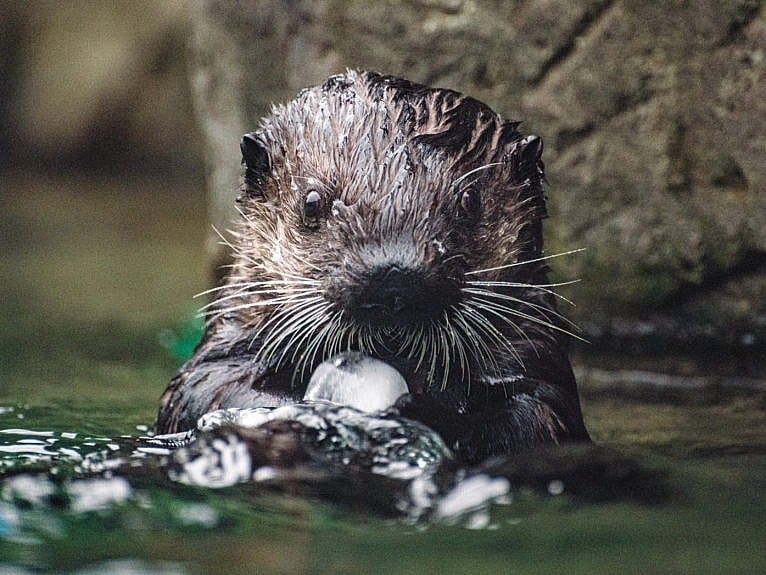 Joey the otter’s livestream got six million views in its first three months and has prompted more than $200,000 in donations to the aquarium (Photograph by Felicia Chang)

One night in early July, a woman in the Vancouver Island village of Kyuquot heard the cries of an animal in distress through the darkness from the nearby seashore. The next day, she returned to the area to find a tiny otter pup—3.8 lb. and no more than two weeks old—squealing beside a dead adult otter presumed to be his mother. Hypothermic and hungry, the pup was flown 300 km to Vancouver’s Marine Mammal Rescue Centre (MMRC), operated by non-profit conservation organization Ocean Wise.

A few weeks later, as the otter recovered, the centre tried something it had never done—a YouTube livestream dedicated solely to the wriggly pup now known as Joey (so named after a donor to the rescue centre). With that, a pandemic social media star was born: on a 24-7 feed, viewers were able to watch Joey eat, sleep, play and be groomed by his caretakers. The stream, which gave way in October to a new, higher-resolution one, garnered nearly six million views in its first three months, while highlight clips uploaded to the centre’s YouTube channel each received hundreds of thousands of views. “We’ve had other otter pups in the past that have captured people’s hearts—locally, anyways,” says Mackenzie Neale, director of animal care at the Vancouver Aquarium, which is also run by Ocean Wise. But Joey’s global fame, Neale says, is on another level.

READ: Sea otters are back with a worrying vengeance in B.C.

The otter pup’s tiny front paws, downy fur, baleful squeaks and generally heart-bursting cuteness are attracting not only viewers, but donors as well. His fans were able to symbolically “adopt” him for $35, with the money going toward his care and food (otters eat 25 per cent of their body weight every day), as well as the operation of the Vancouver Aquarium, which has faced grave financial problems in the wake of pandemic shutdowns and restrictions. 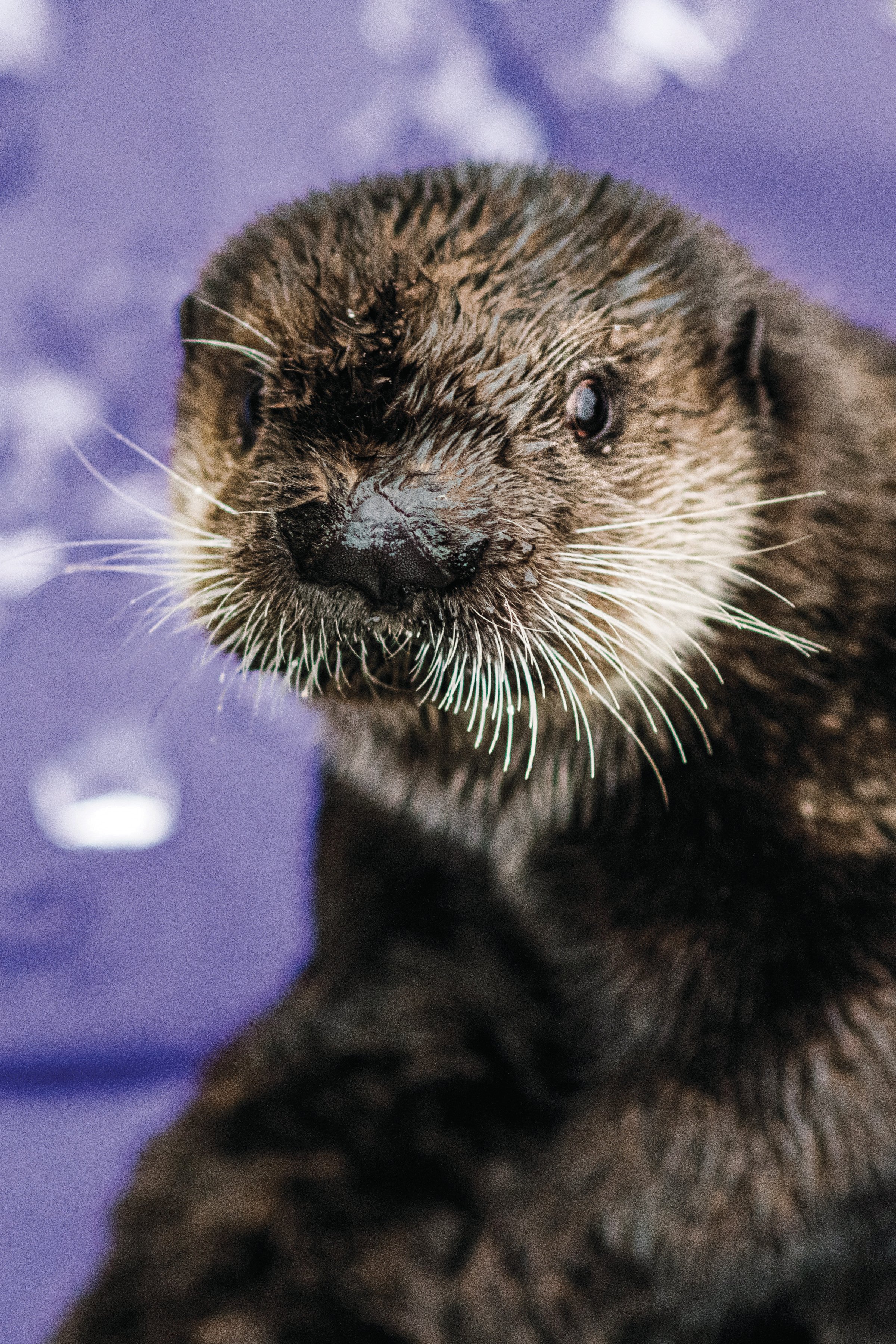 In August, after the Department of Fisheries deemed him non-releasable, Joey was permanently transferred from the rescue centre to the aquarium, where his livestream continued and his celebrity could not be more welcome. In September, the aquarium was closed for a second time during the pandemic, this time to rethink its business model amid an 80 per cent decline in ticket sales. With gate, café and gift shop revenue eliminated, says Neale, Joey the otter’s fundraising has become critical: “It’s part of what’s keeping us alive right now.”

Since his rescue, Joey has yielded more than $200,000 in donations, the most for any single animal in the aquarium. While the closure and layoff of hundreds of employees cut costs, Jeremy Douglas, Ocean Wise’s executive vice-president of external relations, says most of the facility’s fixed spending—some $1 million a month—lies in “keeping 70,000 animals healthy, alive and fed.”

The video feed, he notes, lays bare how much care some rescue marine animals require. When he first arrived, Joey needed constant grooming of his incredibly dense fur, feeding every two hours and even swimming lessons—all things his mother would have done for him in the first six months of his life. Since then, he has moved on to solid food and is old enough to meet other otters at the aquarium. “He’s really been our ambassador for the work that we do and why it’s important,” says Douglas. “Even with the doors to the aquarium closed, we can get lots of people from around the world having an aquarium-type experience because of Joey.” The hope is that Joey fans turn their interest to the threats facing his species, and that they take action in the form of a donation. 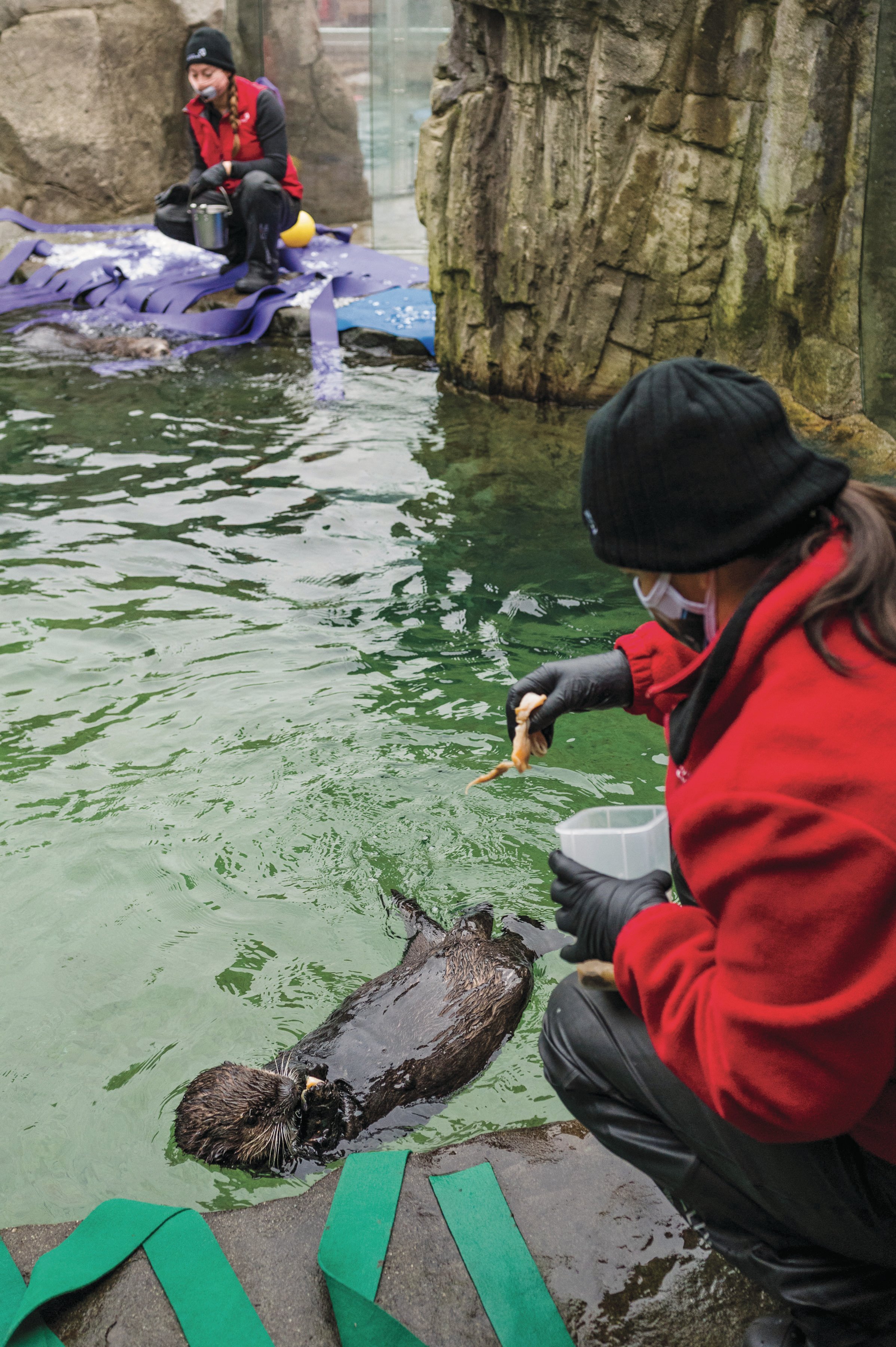 The otter’s pandemic-weary fans watch as he eats, sleeps, plays and is groomed by his caretakers (Photograph by Felicia Chang)

Along with symbolic adoptions and community fundraisers, Ocean Wise has collaborated with the Vancouver Whitecaps, the Major League Soccer team, to create a popular collection of non-medical face masks. A special one featuring Joey’s little snout was a hit, with 8,000 selling in two weeks.

A few factors contributed to Joey’s fame, but his keepers think pandemic circumstances played a big part. People stuck in their homes can check in on the otter no matter where in the world they live. They watch his growth, which seems to occur before their eyes, and talk to staff members looking after him. “It’s giving people something when so much has been taken away,” Neale says. It helps, she adds, that he’s “probably one of the cutest things on the planet.”

For one international Joey fan, he’s more than just entertainment. “He brings a bit of light into my day,” says Georgina Tsang, a 22-year-old psychology student who lives in the U.K. She found that watching the feed, which she has open in a browser tab at all times, relaxed her during stressful moments, much as a therapy animal might. Fascinated that a sea otter from another continent could have this effect, the aspiring psychologist informally surveyed nearly 500 of Joey’s fans to see if they felt the same way (they did). And there’s some science to back up Joey’s therapeutic benefits. A recent study by the University of Leeds found that watching images and videos of cute animals helped reduce participants’ anxiety levels.

As Joey grows up, he’ll be integrated with the aquarium’s other resident otters and his latest livestream may come to an end. “We just have to accept that reality,” says Douglas, “and look at other creative ways to keep all of those Joey fans engaged.” The ultra-popular feed, he notes, has been an interactive backstage pass to the life of just one otter; the aquarium houses tens of thousands of animals, and perhaps turning the camera to others will yield another star. It’s a strategy they’re considering, knowing the pandemic will affect operations for a while to come.

Meantime, fans and donors in the Joey-verse have a catalogue of the best moments from the first few months of his life to watch over and over. For Tsang, the end of the stream will bring a mixture of sadness and shared pride in his survival. “It will be quite a change when it comes to an end,” she says, “but I’ll hold on to the fact that he’ll be loving life with the other otters.”

This article appears in print in the December 2020 issue of Maclean’s magazine with the headline, “Adorable for dollars.” Subscribe to the monthly print magazine here.