P.E.I. lobster fishers risk it all just to leave their harbour. And they're fed up.

High winds and strong tides clog Darnley channel with sand, forcing captains to risk running aground. Some say the only solution is building a new $42-million harbour—but Ottawa isn't ponying up. 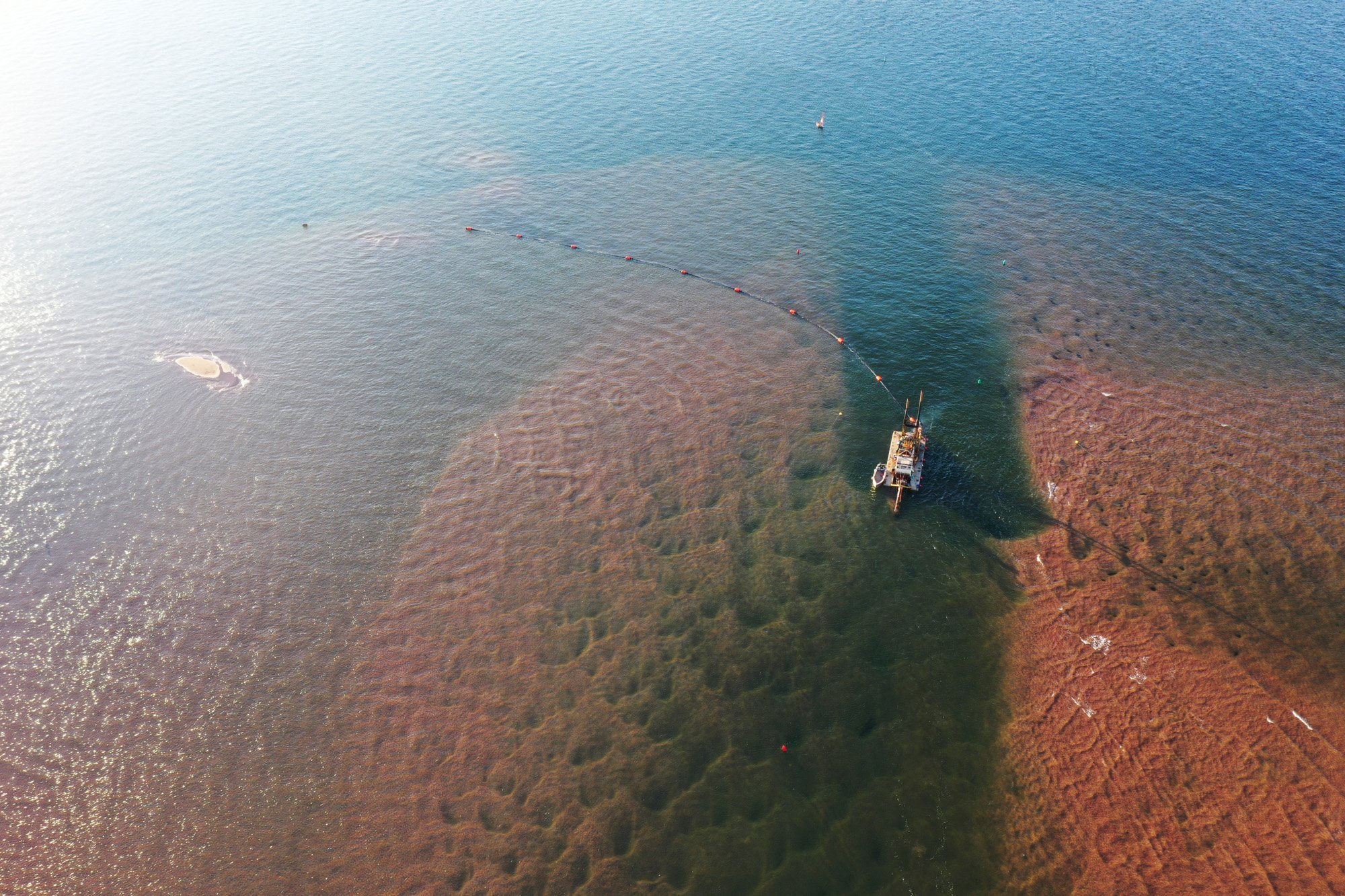 The treacherous Darnley channel, between Malpeque Bay and a nearby wharf, is a worry for fishers who need to navigate it during lobster season (James Harper)

The wharf at Malpeque Cove, a sheltered harbour on Prince Edward Island’s north shore, is as picturesque as they come. The water is lined with bait sheds out of a tourism ad, guarded by a phalanx of lobster, mussel and oyster boats. But the beauty surrounding one of Canada’s richest seafood grounds masks the serious risk it poses to those who work it.

The Darnley channel, which is supposed to offer safe passage between the cove’s main wharf and nearby Malpeque Bay, is subject to a dangerous confluence of high winds and shifting tides, which clog the channel with sand and force gutsy captains to take their chances at running aground. Fishers fear the conditions will eventually take someone’s life.

The channel is known to be the hardest in Atlantic Canada to dredge, and the problem is getting worse: crews hired by Fisheries and Oceans Canada (DFO) clear it as often as three times a year. But they can’t keep up with the infill.

As a result, when the lobster season opens at the end of April, boat captains on the way out risk hitting bottom or veering outside the channel to avoid the shifting hazards. The risk intensifies when they return weighed down by a catch. Most must time their arrival to high tide, and mussel farmers, whose season stretches into autumn, often cut their loads and make more trips, doubling their expenses for the same amount of product. Even then, they don’t feel safe.

“It’s just been sheer luck that somebody hasn’t drowned or gotten severely injured,” says lobster fisherman Chris Wall, president of the Cabot Fishermen’s Co-op and director of the Malpeque Harbour Authority. “Most people don’t have the threat of dying on the way to work.”

The province blames the forces of climate change for some of the increased wind events, a theory that few fishers dispute. Shrinking winter ice cover, Wall says, means coastal areas are more exposed to the forces of erosion that move around the sand.

And the work of dredging is risky in the tough weather. The job is done with a suction dredge, which draws sand through a pipe and pumps it into the nearby Darnley basin. Vernon Gaudette, owner of the company that won the last federal contract to do it, says the harbour should sacrifice an entire season in order to properly open up the channel. “Dredge it out really wide, 100 or 200 feet wide from the sandbar into the harbour,” he says, “and it’ll be 10 years before you’ll ever dredge it again.”

Gaudette speaks with the authority of someone with 50 years in the business. But shutting down for a year may not be an option. Malpeque is a busy harbour, with more than 40 boats moored in the cove. The lobster fishers, mussel farmers and oyster harvesters support more than 200 jobs, and annual revenue is on the upswing. “The harbour’s not a drain on the economy,” says Wall. “It’s an economic generator.” No one’s looking for a handout, but the solution is obvious to the locals. Dredging will only ever be a band-aid. They want a new harbour.

READ: The Great Loop: The continental boating adventure even a pandemic can’t stop

A federal-provincial steering committee formed only last year commissioned a report on how to fix what ails Malpeque. This past March, the consultants reported back, confirming the “significant economical, physical and emotional challenges associated with unsafe conditions,” while pointing out an eye-popping increase in dredging costs—from just $30,000 in 2002 to more than $500,000 last year. The consultants concluded a new harbour built right on Malpeque Bay, which would eliminate the need to navigate the troublesome Darnley channel, was the “logical choice.” They pegged the cost at $41.7 million, but predicted that the resulting economic growth would more than make up for whatever the feds spent on it.

Jamie Fox, P.E.I.’s minister of fisheries and communities, wrote a letter on May 15 to his federal counterpart, Bernadette Jordan, calling the status quo “unacceptable” and insisting a new harbour was “the only viable long-term solution.”

But Jordan’s department balked, according to a briefing note obtained via access to information, deeming the capital cost—which typically falls into federal jurisdiction—“beyond current program funding capability.” In reply to Fox, the federal minister would commit only to “seek and encourage collaborative partner solutions” with the province and industry.

Wayne Easter, Malpeque’s long-time Liberal MP and the chair of the parliamentary finance committee, supports calls for a new harbour but has failed to persuade Jordan, his caucus colleague. The project is too costly for existing small harbour funding, he laments, yet it’s also ineligible for federal infrastructure money targeted at different priorities—which leaves the MP as frustrated as his constituents. “We basically have to continue to make requests to [the] finance [committee], and others in cabinet, that this is a solution that needs a fix,” he says. “And it’s an economic investment into a long-term future.”

Jordan’s office did not respond to requests for comment, but a DFO spokesperson said in a statement that the department is “looking into developing longer-term dredging contracts for the area” and last year experimented with “non-traditional dredging gear” known as a prop wash (a large propeller that churns a path through the channel).

Still, as Ottawa racks up historic deficits, Wall wonders how the feds “seem to have money for everything except for us.” The fisherman who’s spent 25 years hauling lobster out of the bay offers a grim prediction of how a new, safer harbour will eventually get built. “If somebody does drown out there,” he says, “the government will come running with barrel-loads of money.”

This article appears in print in the November 2020 issue of Maclean’s magazine with the headline, “Changing the channel.” Subscribe to the monthly print magazine here.