Environmental groups are lobbying to keep the waterfront a nesting spot for the endangered birds but residents aren't interested in losing their beach. Who will rule the sands? 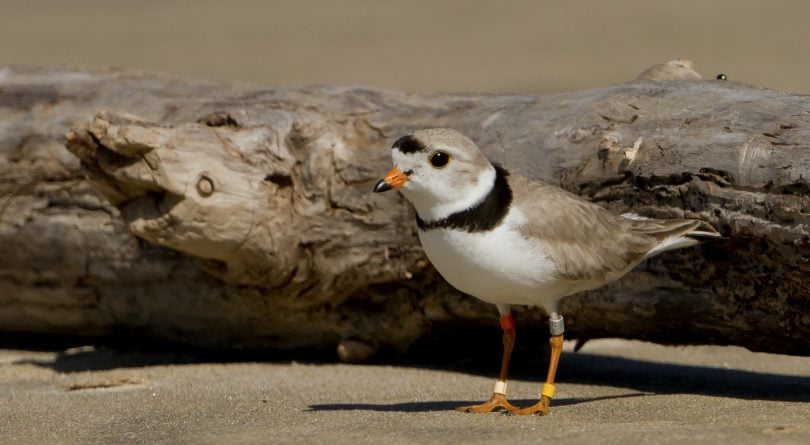 The locals dubbed him Mr. Lonely. Each spring, he’d be back at Sauble Beach along Lake Huron’s eastern shore, but he could never get a date.

Ironically, his solitude made him quite popular, albeit not among the crowd he pursued. “The piping plovers are endangered birds, and a female didn’t show up for Mr. Lonely to court,” says Lynne Richardson, a member of a volunteer group of “citizen scientists” called the Plover Lovers, who educate beachgoers about the bird. “People wanted to know how he was doing.”

Mr. Lonely was resolute. Without a mate, he tried to overtake the nests of fellow male piping plovers, but that failed. Alas, he simply couldn’t keep up with the likes of Flag Boy, a popular male plover banded with an orange flag, known for being a very attentive and protective—not to mention virile—father.

READ: How a stressed woman found solace through looking at birds

But as the piping plover love stories played out on Sauble Beach, another soap opera was taking place further inland—one where environmental groups and the town of South Bruce Peninsula became increasingly at odds over how to best take care of the beach and the bird.

Piping plovers had started strutting up and down the northern end of the town’s shorefront in 2007—the first time the species had nested around Ontario’s Great Lakes in more than 30 years. They’ve made it an annual stop ever since. To help save the species, environmental groups lobbied for more naturalized areas along the shoreline where willow bushes and vegetation could grow untrammelled.

“It’s that early dune habitat, where there’s tall grass, where shrubs start to grow and vegetation starts to grab the blowing sand and rebuild the dunes—that’s what you need for dune habitat,” says Tim Gray, the executive director of Environmental Defence. “Once you get that, you start to make the habitat better for the nesting of plovers.”

Conversely, Janice Jackson, the mayor of South Bruce Peninsula, argued that the plovers had shown a preference to nesting on a “clean beach.” By 2012, says Jackson, the northern end of the strand was so overgrown with willow bushes and vegetation that the plovers moved further south along the 11-km beach. And so the town “rehabilitated the north end of the beach in 2016,” Jackson adds, using heavy machinery to remove willow bushes and vegetation. The plovers returned to that area the following year. “Our position is we’re creating plover habitat, not harming,” Jackson says. Not to mention, a clean beach is better for tourists and local beachgoers—even with fenced-off enclosures erected to protect the plovers’ habitat.

A primary threat to the piping plover is human disturbance. “The sandy beaches where plovers live are also popular for human recreation, which can destroy nests,” according to an Ontario government fact sheet. “Groomed beaches lack natural hiding places, making eggs and chicks vulnerable to predators such as foxes, cats, raccoons and gulls.”

That might explain why, in 2017, when the town was doing beach maintenance like grooming its surface, the provincial ministry of natural resources and forestry (MNRF) charged the town of South Bruce Peninsula—on two separate occasions­—for violations under the Endangered Species Act. In March 2018, the ministry followed up by issuing a stop-work order on Sauble’s beach maintenance, leaving lawyers and the courts to figure it out. (A pre-trial hearing took place in February 2019.)

“The tax dollars we’ve wasted defending our asset is tragic,” Jackson adds. “Our residents are happy to live in harmony with the plovers, but they’re not interested in losing their beach to the plovers. They’ll share it, but won’t lose it.”

Indeed, the town has shown some proactive care for the endangered birds—engaging with the MNRF, for example, on where best to set up Canada Day fireworks along Sauble Beach to minimize impact on the plovers.

Still, the repopulating efforts have seen mixed results. A total of three baby plovers fledged—meaning they could fly off the beach for migration—between 2014 and 2016, according to data compiled by the Plover Lovers in conjunction with the natural resources department, while three adults were lost during those years. And while 2017 was a record year at Sauble, with seven fledged plovers out of a dozen that hatched—and zero adults lost—last year only two plovers fledged and one adult was lost. With skunks and raccoons keen to eat their eggs, which lie camouflaged in the sand, all sides agree they wish the bird’s replacement rate could be higher.

In the meantime, the avian soap opera went on. In 2016, everything changed for Mr. Lonely. He finally found someone who took an interest in him, Ms. Green Dots. Mr. Lonely did all the right things during the courtship: the high step-dance common during plover mating; digging up a scrape—or nesting site—for Ms. Green Dots to inspect for approval. It wasn’t too long until the couple had four eggs in the nest, with both Mr. Lonely and Ms. Green Dots sharing the duties of watching over them.

“Mr. Lonely is lonely no more!” the Plover Lovers crowed in a blog post.

But his story had a final twist. Mere days into the eggs’ 28-day incubation period, under the cover of darkness, Mr. Lonely was killed by an unknown nocturnal predator. Ms. Green Dots, unable to handle the incubation duties alone, simply abandoned the nest and the eggs.

Less than a week later, she was spotted cozying up in the nest of a newcomer to Sauble Beach: Port Boy.