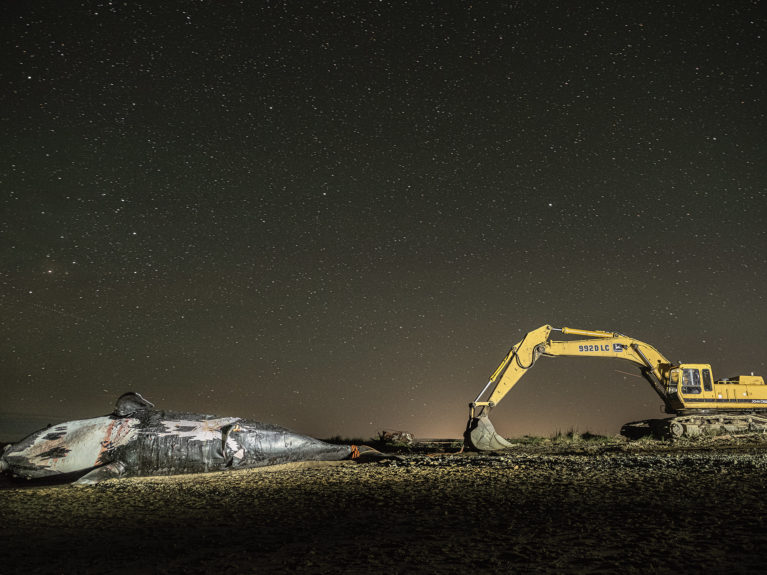 Wolverine, a right whale known to researchers by the boat-propeller scars on his back, was found dead and pulled ashore for study in June 2019 (Nick Hawkins)

When a whale dies in the Maritime region, Tonya Wimmer, director of Halifax’s Marine Animal Response Society, organizes a group of up to two dozen veterinarians and researchers to carry out a complete scientific dissection. For hours or even days, team members work waist-deep in the blood and viscera of a 50-ton whale, enduring the stench of rotting flesh to gather vital biological samples. The process is messy, exhausting and emotional.

It’s an especially grim task when the necropsy (or autopsy) is on a North Atlantic right whale. Now numbering around 400, these animals are being struck by ships and getting tangled in fishing ropes faster than they can reproduce. Necropsies provide scientists with critical information, says Wimmer, such as blubber thickness and hormone levels, which helps them understand more about the health of the population. They also reveal the cause of death, which is almost always related to human industry.

In the United States, travel restrictions and social distancing have already hampered research cruises and survey flights, which are both crucial to right whale recovery. It’s likely there will be fewer eyes on the whales in Canadian waters as well.

As right whales migrate north to their summer feeding grounds, Wimmer’s group is preparing for potential mortalities. Coronavirus measures will make necropsies difficult, but not impossible. Team members can maintain physical distance while manoeuvring around a 60-foot whale, and they already use copious personal protective equipment. “If we have the means to do it and it can be done safely, then we need to do it,” says Wimmer.

And the pandemic may have a silver lining. Lobster fishing seasons have shifted, cruise ships aren’t sailing and global shipping has slowed. That all makes the ocean a safer place for North Atlantic right whales. “Maybe this is the reprieve that these animals need,” says Wimmer. 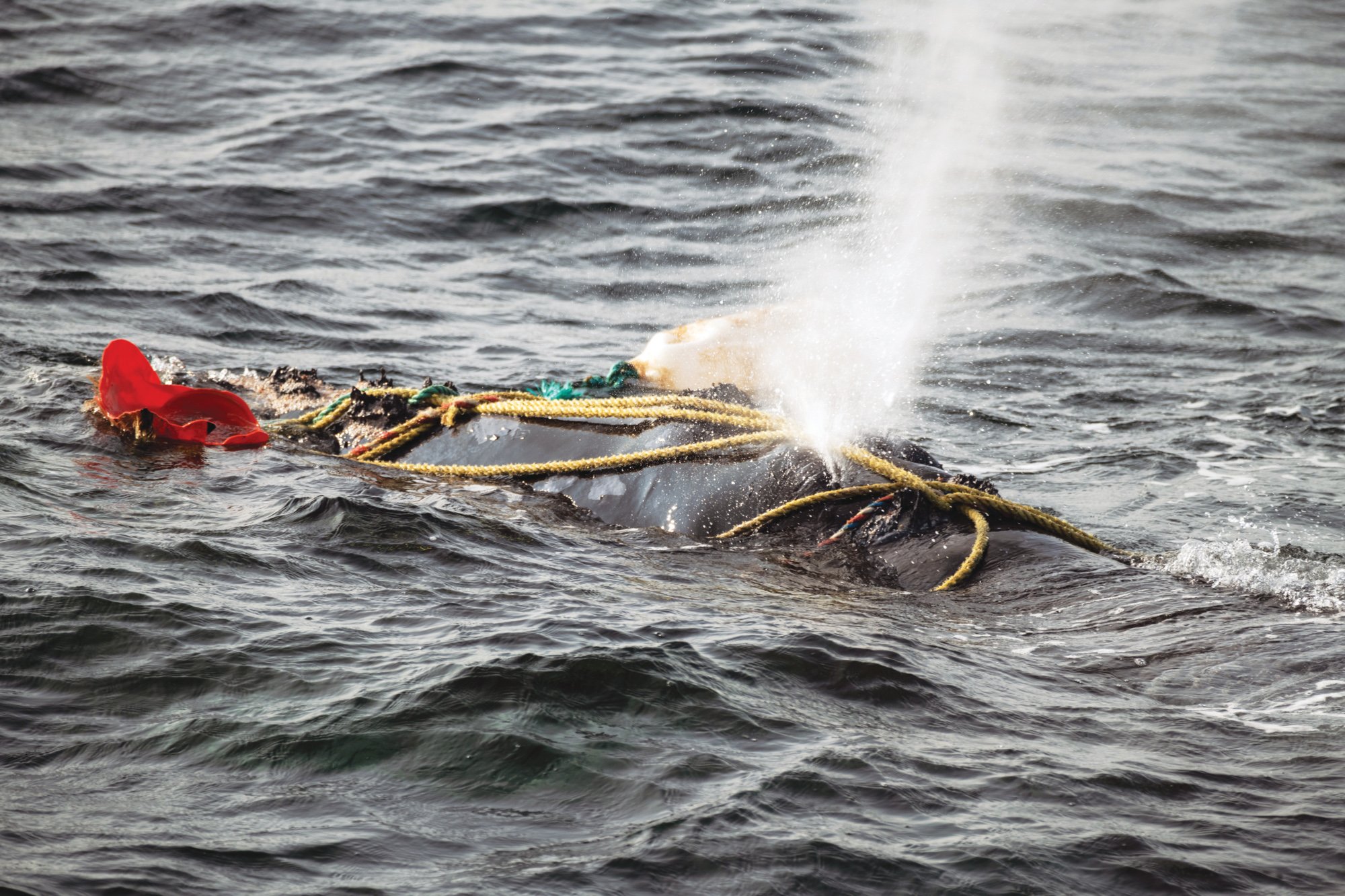 Fishing ropes wrap over the blowhole of a severely entangled North Atlantic right whale in the Gulf of Saint Lawrence, Canada. (Nick Hawkins) 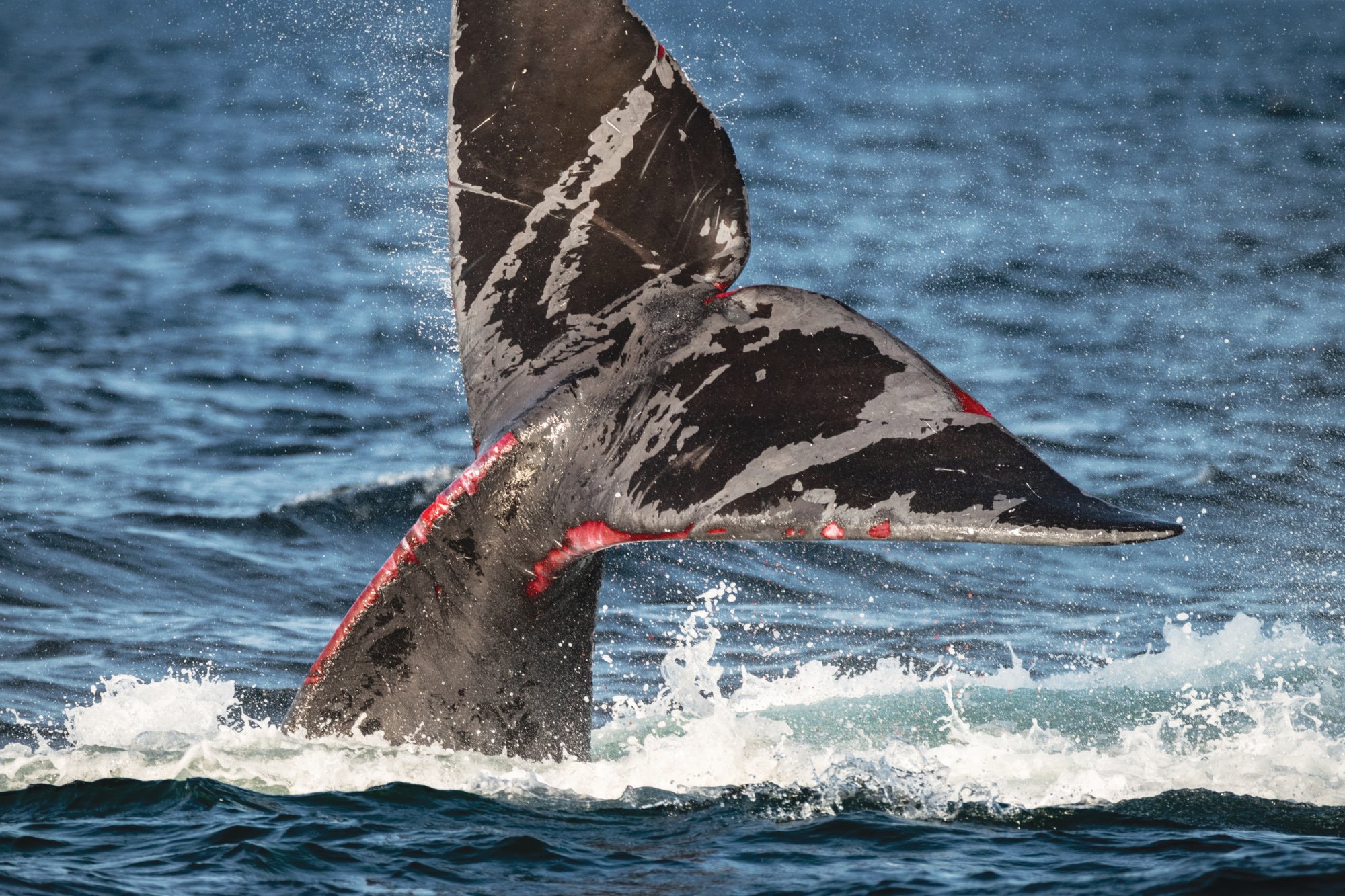 A North Atlantic right whale struggles to free itself from being entangled in fishing gear in the Gulf of Saint Lawrence, Canada (Nick Hawkins) 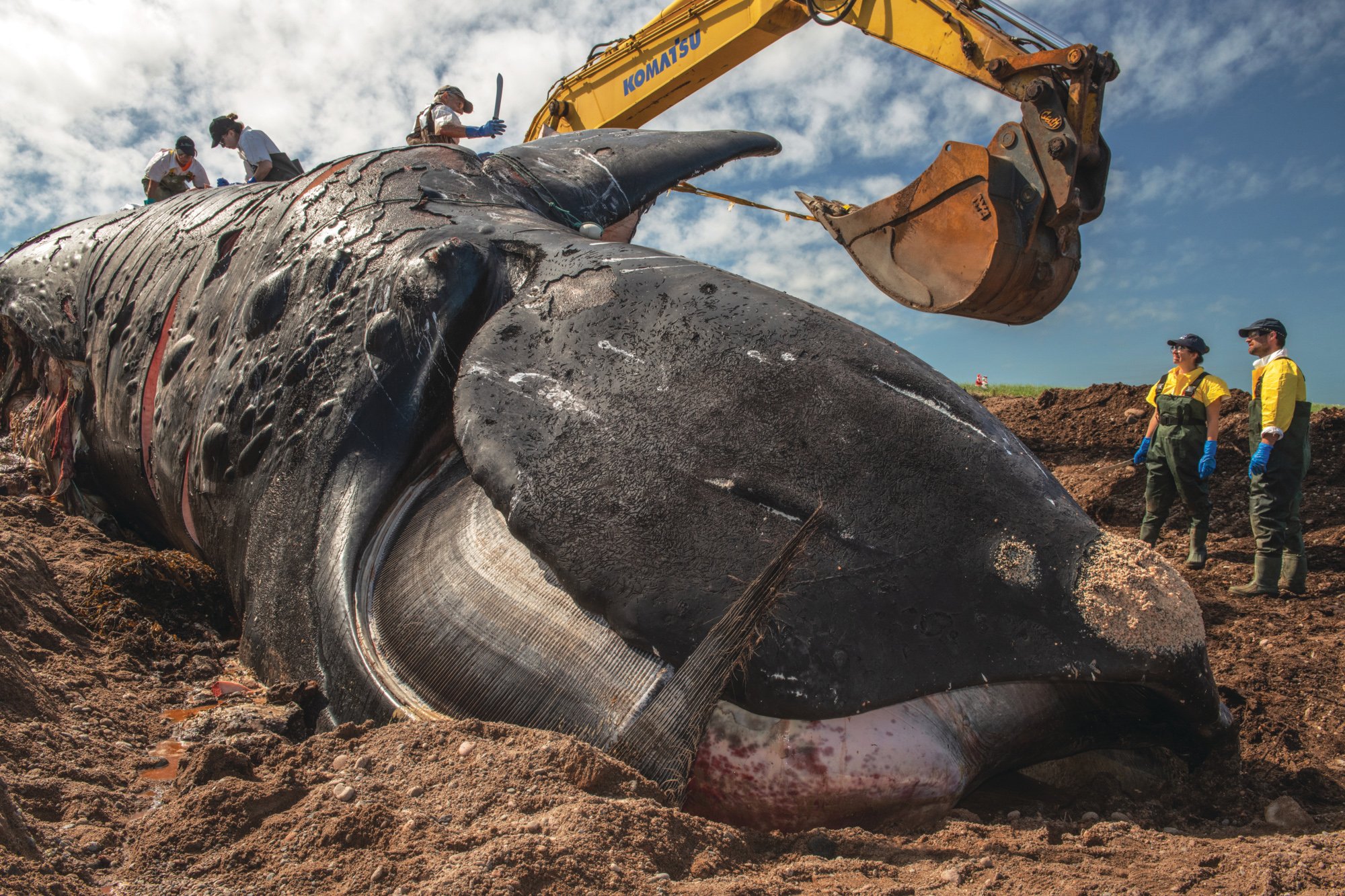 Punctuation, a large female right whale who scientists have been tracking since she was first spotted in 1981, had given birth to eight calves (Nick Hawkins) 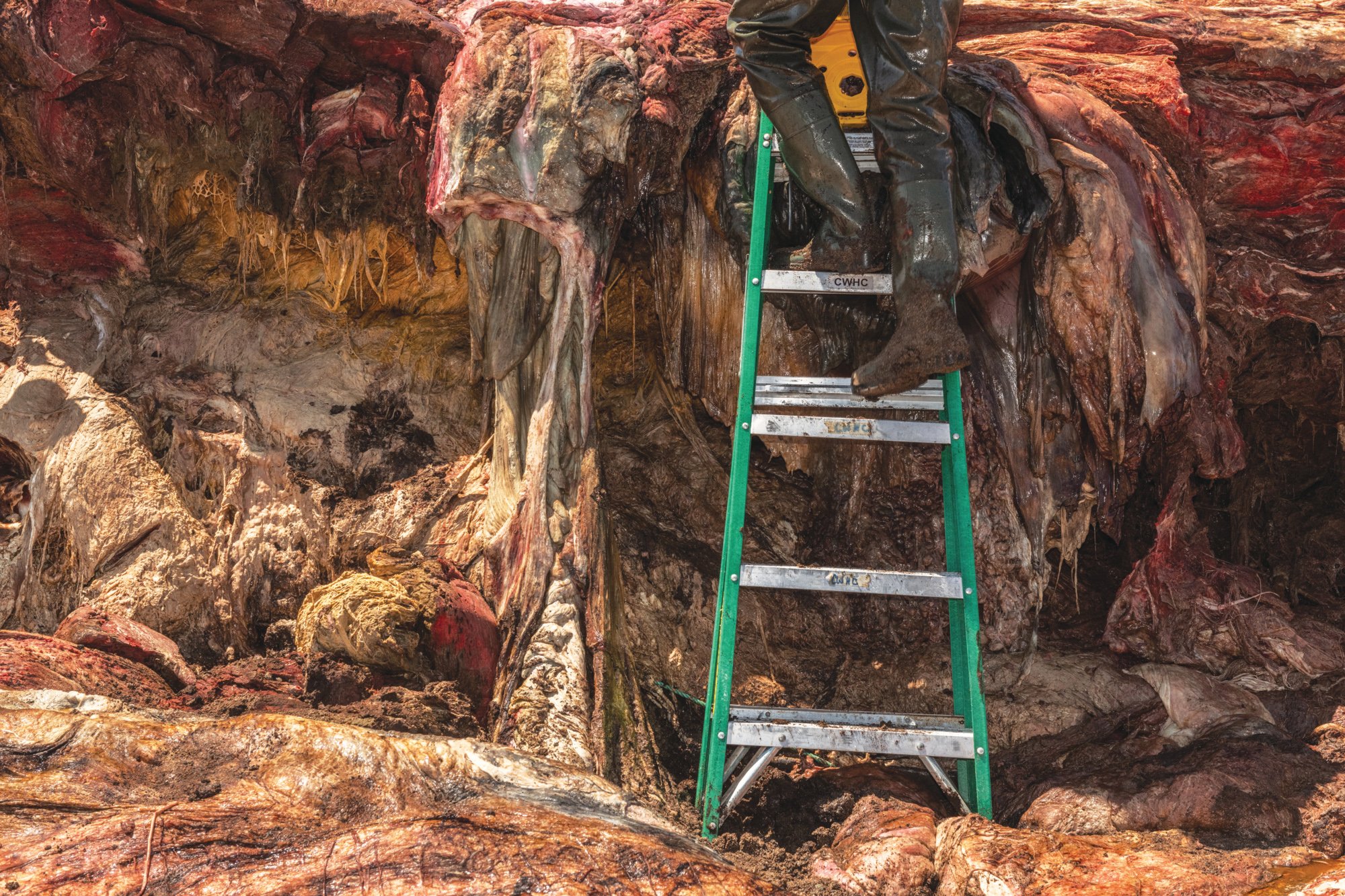 Researchers use a ladder to examine the body of Punctuation, a female right whale (Nick Hawkins) 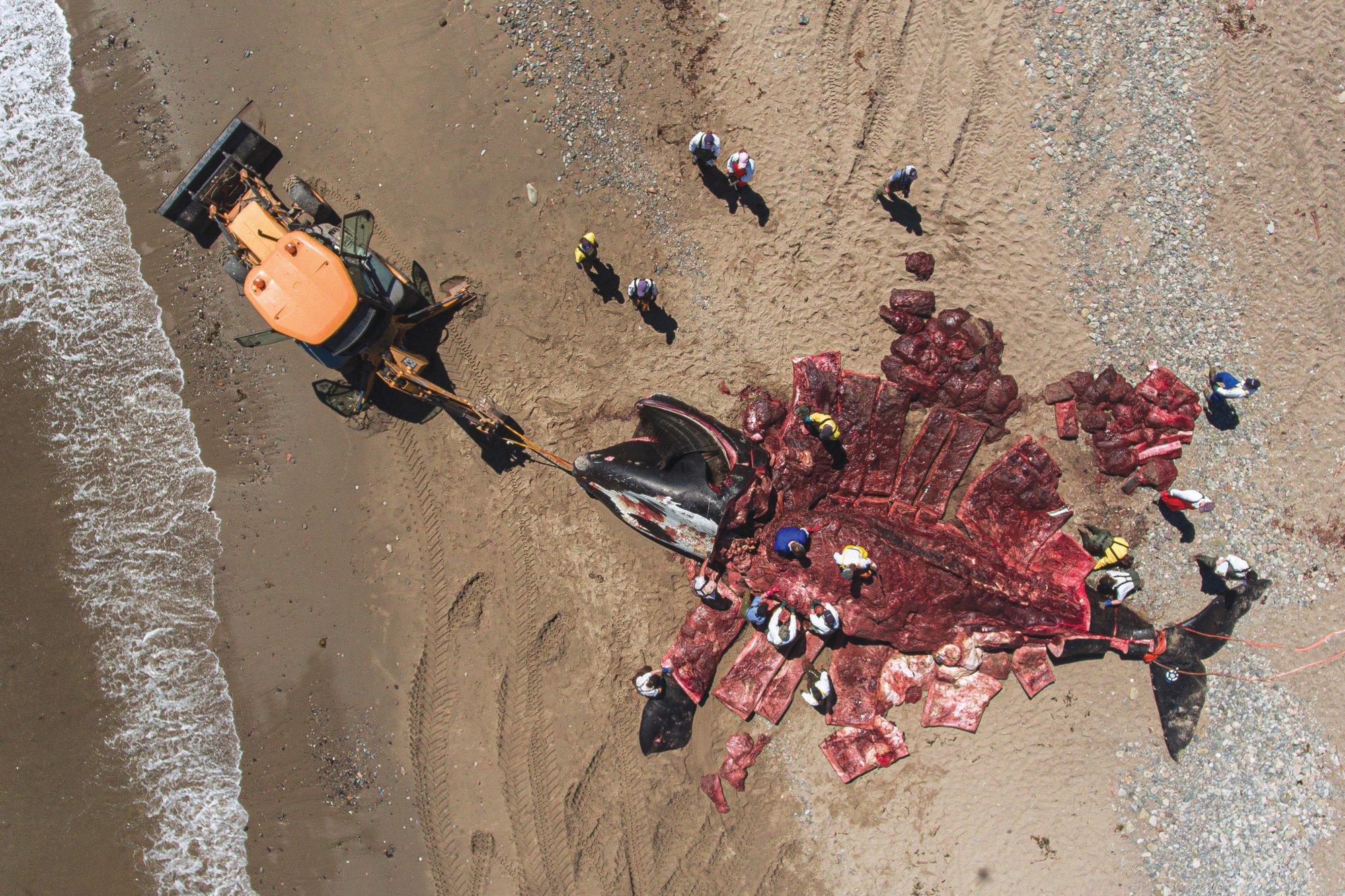 This article appears in print in the July 2020 issue of Maclean’s magazine with the headline, “Saving the right.” Subscribe to the monthly print magazine here.