The B.C. river where salmon are whisked to safety in a giant pressurized tube

A rock slide blocked tens of thousands of salmon from reaching their spawning grounds in the Fraser River. Officials have found an innovative temporary solution. 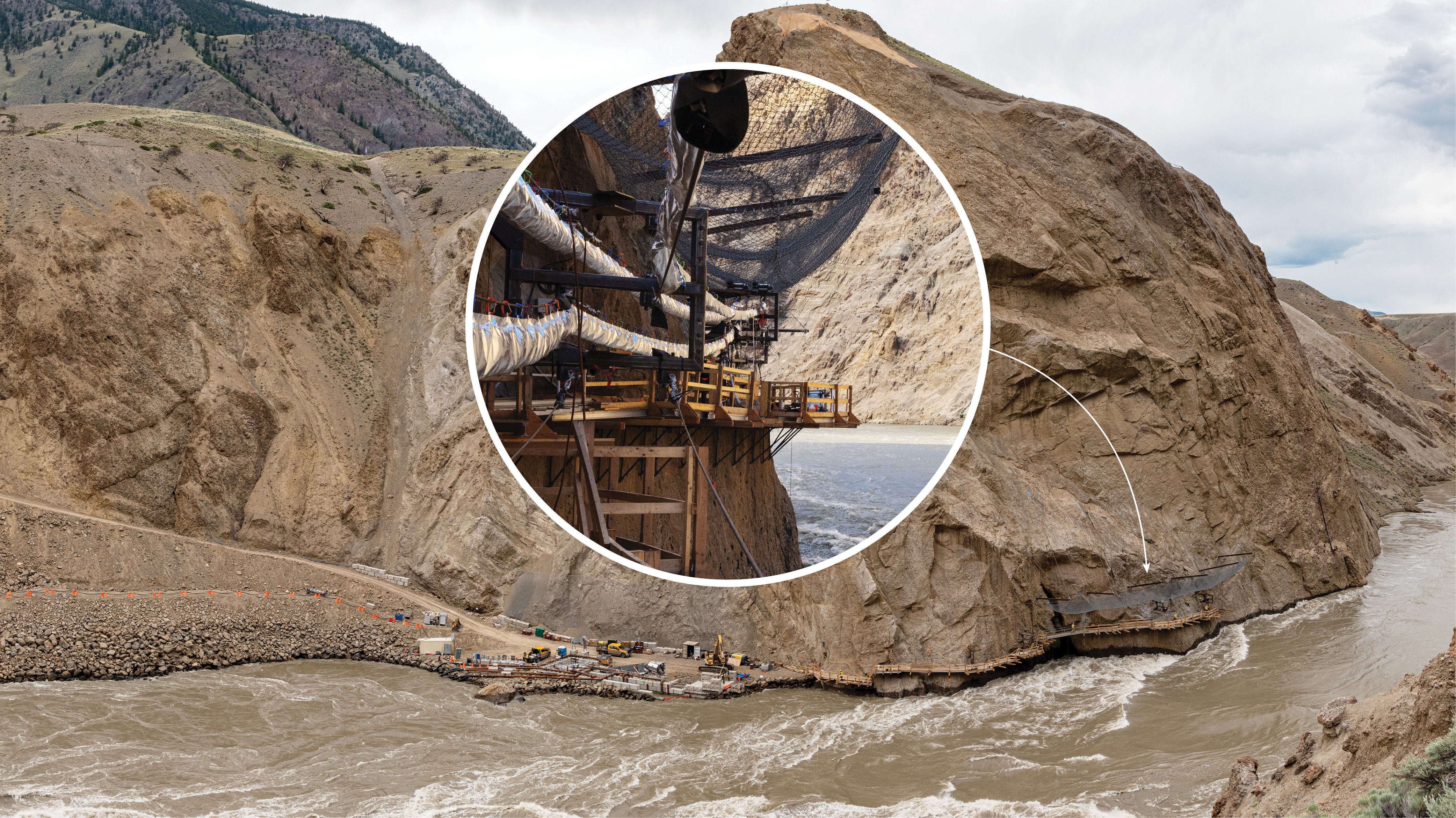 A landslide along the Fraser River created a waterfall that spawning salmon couldn’t cross; an innovative system gives them passage (Courtesy of Peter Kiewit Sons ULC.)

It seems pointless to get caught up in nomenclature when it comes to a giant tube that propels fish across a massive rock slide on one of Canada’s greatest rivers. But for the record: there is not a “salmon cannon” on B.C.’s mighty Fraser.

Cannons are hand-loaded, clarifies Vince Bryan III, co-founder and CEO of Whooshh Innovations, a Seattle-based company that specializes in such equipment. And contrary to early reports, no one in a remote area 64 km north of Lillooet, B.C., is physically thrusting fish into a conduit that sucks them past the Big Bar slide, which has blocked tens of thousands of salmon from reaching their spawning grounds. “Our never-ending problem is that the media can’t let go of the term ‘salmon cannon,’ ” Bryan laments.

What his onomatopoeically named company has installed at the site is next-generation technology—no less dramatic and much more innovative than a cannon. The setup allows the fish to swim up to a step—essentially, a small barrier they can easily jump to a higher level—before each salmon passes though an electronic scanner that photographs and records its dimensions. Based on that measurement, a gate then opens leading to a tube that corresponds to the fish’s size.

From there, the salmon is whisked about 150 m upriver through a temperature-controlled, pressurized tube that is suspended along the canyon wall, arriving with a soft landing on the other side of the rock barrier. The trip takes about 20 seconds.

Whooshh got its start in the fruit fields, where its tubes offered a way to swiftly transport produce without bruising it. But the system proved adaptable to helping fish bypass hydroelectric dams on their migratory routes. Now, on the Fraser, they are part of an effort vital to the region’s ecosystems and its economy.

The rock slide of late 2018 had been a cataclysmic event for the Fraser River salmon runs. Some 75,000 cubic metres of rock broke away from the canyon side, tumbling 125 m into the river. The site of the blockage is so remote that six months had passed before it was reported to Fisheries and Oceans Canada (DFO), whose crews arrived to find salmon of four species—chinook, coho, sockeye and pink—in crisis. They’d been battering themselves to exhaustion trying to scale the new five-metre waterfall blocking their routes to the Chilko River, Stuart Lake or Upper Fraser. “Those are their home spawning streams,” says Gwil Roberts, DFO’s director of the Big Bar landslide response. “If they can’t get there, they will die trying.”

Unable to remove enough rock to free the fish, crews tried various ways last summer to move them, including catching them in nets and lugging them by hand to oxygenated transfer tanks, which a helicopter would then lift upstream. But the casualty rate was high. An estimated 99 per cent of early Stuart sockeye didn’t make it; the early chinook fared only marginally better, at 89 per cent attrition. “We were moving battered and damaged fish,” says Roberts. Only in September, when the water levels fell, were crews able to move enough rock to help the remaining salmon get by on their own power.

For many in the region, the rock dam accelerated an already pressing problem. “Even before the slide, the returns last year for chinook and sockeye were low,” says Gordon Sterritt, executive director of the Upper Fraser Fisheries Conservation Alliance. “This year, it will likely be the lowest return on record. We have to get them by the slide. Every fish counts.”

Aware of the urgency, DFO is spending more than $50 million in search of a permanent solution. But to remove rock or create a new fishway—the team’s two primary options—crews needed machinery capable of clearing a river that can run 20 m deep. Getting equipment in place near the high bluffs along the canyon took time. To slow things further, the entire site lay kilometres away from the nearest gravel road. 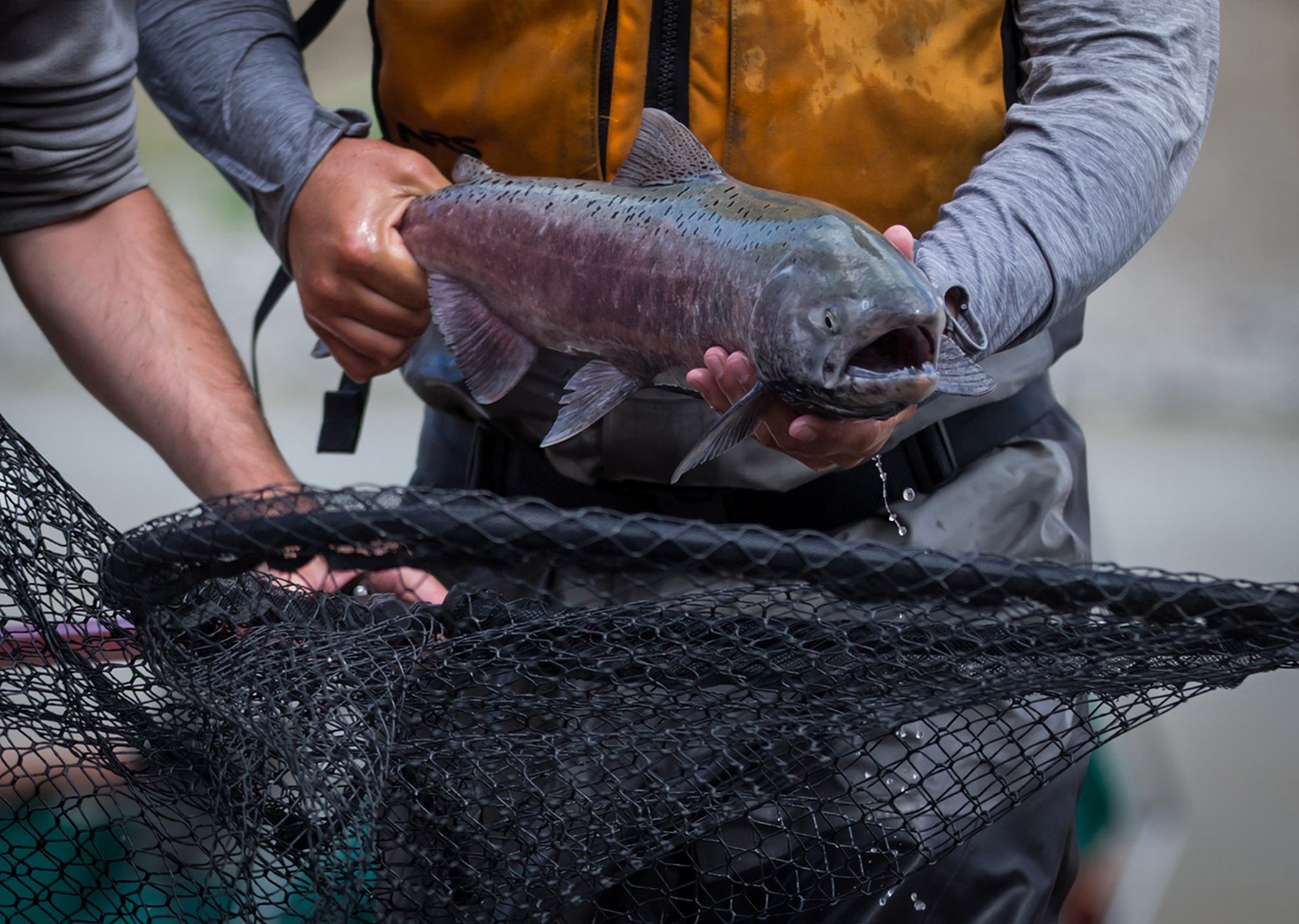 Last summer, before the portal was in place, salmon were being lifted over the rocks by helicopter (Darryl Dyck/CP)

In the first three months after DFO discovered the slide, crews removed 300 truckloads of rock—a seemingly impressive total that amounts to less than three per cent of what crashed into the river.

With a permanent solution a long way off, the salmon needed a temporary solution, and that’s where Whooshh came in. DFO reached out last year, Bryan recalls, inviting them to take stock of the scene. “They are working in rock along the side of a cliff that has no power, no roads, no anything,” he says. “That’s all been brought in to give the fish a chance.”

READ: These stranded B.C. salmon are in good hands

By June 2020, Whooshh had what it calls its “passage portal” up and running. A generator on site powers the system. When the fish go into the scanner, infrared and optical cameras shooting from three different angles take 18 high-definition pictures capturing each fish’s length, width and girth—all within less than a second; those measurements determine which of the six pressurized tubes the fish should enter; the pipes’ circumferences range from about 27 cm (about the girth of a pint glass) to 50 cm (that of a CFL football).

“You’ve got the chinook, which can be very large up there, and the sockeye, which can be quite small,” Bryan says. With the fish snugly fit into one of the flexible tubes—they’re made of a thermoplastic elastomer—a cool burst of air that matches the water temperature creates a pressure differential within the tube that propels the salmon. A mist is injected to deliver oxygen, so the fish isn’t distressed by the time it dives into the river at the upstream end.

DFO estimates the new system will be able to move more than 15,000 salmon past the slide each day. They start arriving by the beginning of July, and once everything is running smoothly, Bryan says, teams will be able to monitor the system remotely. “It’s actually better if no one is there,” he says, “because then nobody’s bothering the fish.”

This article appears in print in the August 2020 issue of Maclean’s magazine with the headline, “Riding the Big Bar express.” Subscribe to the monthly print magazine here.