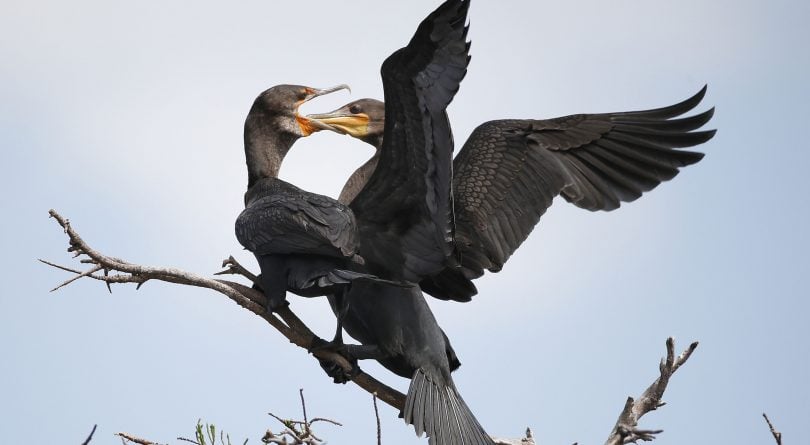 On a windy day when Lake Erie is choppy, it’s easiest to get to Canada’s southernmost point, tiny Middle Island, from the American side. Foreign visitors who sneak ashore on the island—which sits a stone’s throw from U.S. waters and was once a Prohibition-era rum-running waypoint owned by the gambling king of Toledo—shouldn’t expect to meet a friendly northern neighbour. They’re more likely to encounter thousands of double-crested cormorants. Or the hunters hired to kill them.

Cormorants are easy to spot on Middle Island. Many nest in trees turned bare by the birds’ acidic guano, and their dark plumage stands out from the limestone shore and hardy greenery that survives the onslaught of their feces. They mill about on a sandspit that stretches out to the west. And for a few weeks every year, many of the nesting birds are targeted by Parks Canada sharpshooters, whose mission is to protect rare plant and animal species—some found only on this isolated outpost of Point Pelee National Park. Most notable among the threatened flora: the wild hyacinth, whose purple or white blossoms used to decorate Erie’s mid-lake archipelago in spring, but now live under extreme stress.

READ MORE: Why Lake Erie has the same rights as a person in Toledo, Ohio

The cormorants may shortly face a bigger threat. Doug Ford’s provincial Tories could soon give licensed hunters the ability to bag 50 of the birds a day—a proposal critics say is based on public disdain for cormorants, not science. Barry MacKay, a director at the Animal Alliance of Canada who has observed the birds for four decades, says the annual cull is indefensible, and he was “shocked and saddened” at what he witnessed this year. Every year, MacKay charters a boat in Leamington, Ont., and bobs around on the water as the hunters head ashore. (The same father-son charter company ferries Parks Canada staff to the island.) Even a few years ago, cormorants would take flight in huge flocks at the slightest disturbance from a trespasser. Now, MacKay has watched those flocks dwindle.

At the heart of the disagreement is what’s considered a natural number of cormorants. No one disputes the birds are native to the area. Parks officials say their numbers were historically low in the lower Great Lakes basin, but the human introduction of smaller fish to the lake provided a food source that fuelled their population growth. MacKay and his allies counter that today’s cormorants are simply rebounding after decades of deadly human activity, including the introduction of DDT in the last century.

“They want a diorama,” he says of Parks officials’ plans for Middle Island. “But nature doesn’t work that way.” And while the wild hyacinth may be threatened on a very few small Canadian islands, he adds, it’s plentiful on the other side of the invisible international boundary a few dozen kilometres to the south. Indeed, that particular hyacinth is threatened in four states, including Michigan and Pennsylvania—but not nearby Ohio, nor most of the eastern U.S. 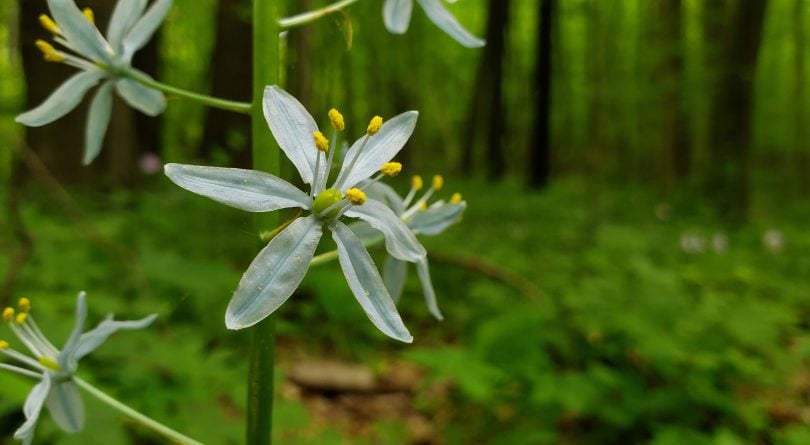 A lone wild hyacinth grows in the forest surrounding the “River Trail” in Augusta-Anne Olsen State Nature Preserve in Ohio, where the plant is not threatened. (Photograph by Nick Taylor-Vaisey)

Tammy Dobbie, the national park’s ecologist, defends her agency’s ardent protection of the hyacinth and its fellow species at risk. Middle Island has no equal, given its uniquely mild climate and extended growing season compared to the mainland, she says. Canada’s hyacinth is at the edge of its range across North America, Dobbie adds, but that suggests it’s hardier and worth preserving—especially as climate change tests ecosystems.

Parks Canada names 10 other species at risk on the island, including five plants, two reptiles, two snails and a butterfly. “Middle Island becomes more interesting the more studying you do,” says Dobbie.

Dobbie acknowledges that the annual cull is the most sensitive plank in Parks Canada’s conservation plan. She said sharpshooters target birds before they establish their nests and lay eggs, and only in areas in which species are threatened. Dobbie listed several non-lethal deterrents the agency also uses, including scarecrows and coyote decoys that scare the birds off before they nest. The goal isn’t to eliminate cormorants, she says, but to reduce their range—and that of the deadly guano—to certain parts of the island.

RELATED: The fury of Lake Erie captured in photos

There is another way to control cormorants, says York University associate professor Gail Fraser, and it’s happening right under the noses of residents of Canada’s biggest city. The country’s largest colony is in Toronto, nestled in the artificial peninsulas of Tommy Thompson Park, which juts into Lake Ontario. Fraser, an expert in bird conservation and ecology, spends countless hours observing the birds as they nest, sheltered behind a duck blind she reaches by kayak. She watches them build nests out of whatever is available, even conveniently located garbage. Fraser, who helped craft the park’s non-lethal cormorant management plan that involves inactive nest removal, artificial predators and noise bangers, describes the birds as “effervescent,” a beautiful species with a bad rap. Many park-goers may resent them because of their smell and the arresting consequences of their guano. But without a single shot fired on Toronto’s waterfront, they’ve come to coexist.

Still, the cormorants inspire lineups of detractors. A fisherman willing to badmouth the birds for eating too many fish is never far away. The provincial hunting and fishing association didn’t pitch the proposed hunt, but supports it. And Parks Canada is dead-set on saving Middle Island’s flora and fauna. But as with their rum-running forebears out in Lake Erie, trying to rein in the cormorants appears to be an exercise in futility.