The forecast: sunny, with a chance of earthquakes

Forecasters predict a lovely mild winter, with a risk of a devastating flood or other disaster 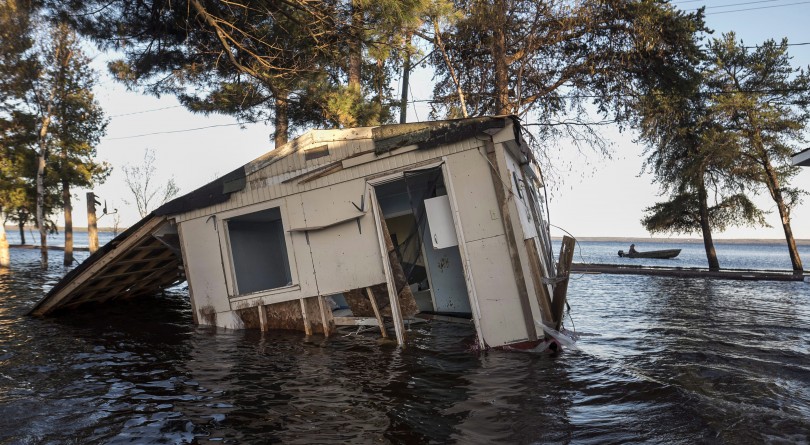 A cottage rests toppled in water after being battered by floodwater from the Saint John River on Grand Lake in New Brunswick on May 11, 2018. (Darren Calabrese/CP)

Sun seekers will be thrilled with 2019; skiers will be sad. If long-range forecasts are correct, Canadians are in for a warmer-than-usual winter, followed by a hot summer. El Niño has a lot to do with this prediction, explains David Phillips, senior climatologist for Environment and Climate Change Canada. The warm band of ocean water near the equator appears to be sticking around for the season and will blow Pacific air north this winter, making days a degree or two warmer, on average. This El Niño warming will be felt more in western Canada, says Phillips. Looking further out to summer 2019, current national models show warmer-than-average temperatures, particularly in B.C., Quebec and Atlantic Canada.

Besides El Niño, scientists are watching a warm-water mass in the Bering Strait off the Alaskan coast. This warm “Pacific blob,” as it has been dubbed, can create a high-pressure ridge that blows warm air into B.C. and Yukon and sometimes Alberta and Saskatchewan. The reverse flow from the blob can send Arctic air into central Canada. “The last real blob was in 2013 and 2014,” says Phillips. “There was almost no skiing going on in British Columbia, but in central Canada it was friggin’ cold.”

Droughts, floods and landslides, too

Scientists think global warming is causing a weaker jet stream, which gets its energy from the temperature difference between equatorial and Arctic areas, explains Mike Flannigan, a professor in the University of Alberta’s department of renewable resources. “Our Arctic areas are warming much more rapidly than equatorial areas, so that temperature difference is becoming smaller,” he says. While a weaker jet stream can mean more drought and fires, it can also cause the opposite when a stagnant low-pressure area brings heavy rain. “With this stalling-type pattern, you get more extreme weather,” says Flannigan. Flooding isn’t the only danger associated with heavy rain. “As climate is changing and glaciers are melting and more rainfall is happening, we are seeing more landslides,” says Mika McKinnon, a Vancouver-based geophysicist.

Should I get ready for the big one?

Will 2019 be the year of the so-called “big one” on the West Coast? “We can’t pinpoint exactly when earthquakes are going to happen,” says McKinnon. However, 40 per cent of the Canadian population is at risk for a major earthquake in the next 50 years, she says. While death and injury are worst-case outcomes, a Vancouver-area earthquake could trigger landslides and block highways, railways and ports, notes Brett Gilley, a senior instructor in UBC’s department of earth, ocean and atmospheric sciences.

An alternate forecast for the science-adverse

If you don’t like the official Canadian forecast, with its increased chance of fires and floods, there is always The Old Farmer’s Almanac, which uses “a secret formula” devised in 1792 to make its predictions. Its 2019 forecast is almost the opposite of Environment Canada’s. It calls for a cold winter with “below-normal winter temperatures in most of the nation.”