The goldfish invasion of Hamilton Harbour 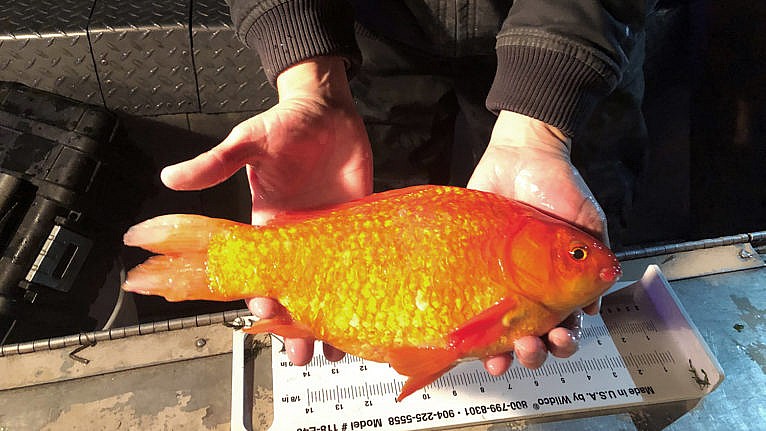 Tys Theysmeyer remembers standing on the trail by Cootes Paradise marsh, looking out at the pond-like expanse that is linked by a narrow channel to Hamilton Harbour. Below the surface, he could make out a shifting mass he figured to be 100 feet long and 20 feet wide—a sea of goldfish. When it gets cold, they “school up,” he explains: “Fish that were dispersed over all of Cootes Paradise were suddenly in this tight ball, the kind of thing you’d imagine in the ocean.”

That November day in 2014 was when it hit home for Theysmeyer, head of natural lands at Hamilton’s Royal Botanical Gardens. What had been a few discarded pets had multiplied to millions, and the problem reached far beyond the marsh. Theysmeyer’s job entails conserving and restoring anything in the area that isn’t a manicured landscape—Cootes Paradise and Hamilton Harbour included. In 12 years in the position, he has witnessed an explosion in the goldfish population that has further imbalanced the area’s already stressed ecosystem.

The invasion isn’t unique to the Great Lakes, or North America. But Hamilton Harbour has proven an ideal home for the unnervingly resilient and destructive Carassius auratus, a cousin of the common carp that can grow from carnival-prize sized to a whopping 40 cm long. The water body has been used and abused over the decades, as sewage water and industrial by-products have flowed into the port since the 1800s with devastating consequences for the harbour’s flora and fauna. Today, treated sewage water, which isn’t fully cleansed of algae-causing nutrients, is still released into the harbour, along with occasional sewage overflow. The water has little to no oxygen, making survival a struggle for native fish species like walleye and yellow perch.

The goldfish, meanwhile, is the ultimate survivor of difficult conditions. Not only can you “stick it in a fishbowl in a kid’s room and not really worry,” says Theysmeyer, it can feed on blue-green algae blooms that native species cannot—blooms that appear with increasing frequency in Hamilton Harbour, due to pollution and warming water. What’s more, the creature’s bottom-grazing uproots vegetation and increases the water’s murkiness, both of which make life still tougher for other inhabitants. The goldfish, meanwhile, are rapidly reproducing. Without management, experts say, they’ll squeeze out their native competitors and take over.

The irony is, the goldfish explosion has coincided with a successful effort to bring down the number of common carp in Cootes Paradise and Hamilton Harbour, notes Christine Boston, an aquatic research biologist with Fisheries and Oceans Canada. Since 1997, the Royal Botanical Gardens’ fishway—a mechanism that filters out common carp trying to enter Cootes Paradise, an important spawning spot for indigenous fish species—has significantly reduced the number of the invasive species in the harbour. But in a classic case of unintended consequences, that resulted in less competition for goldfish. 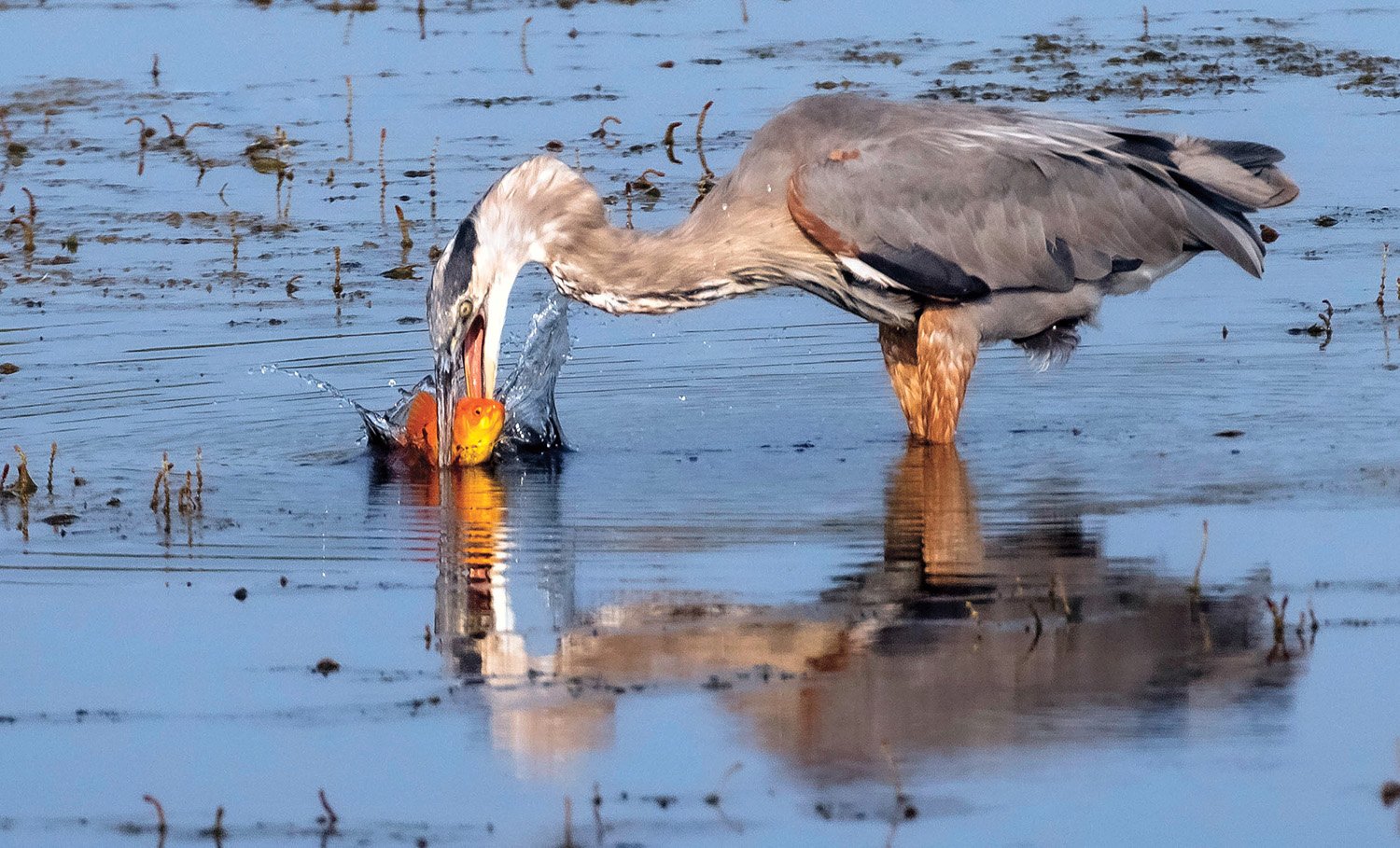 A great blue heron feeds on a goldfish; the population explosion has stressed the area’s ecosystem (Courtesy of Jeff Hunking/Fisheries and Oceans Canada)

Boston, who has worked on fish population monitoring at Hamilton Harbour for 21 years, often walks along the waterfront, from where she frequently spots vivid goldfish. “The fact that we’re still seeing brightly coloured fish in our catches means they’re still being introduced into the system,” she says. “Because nature will [eventually] select against them.”

Boston urges people who no longer want their goldfish to return them to the pet store, find them a new home or humanely end their lives (for those with the stomach, a large stone will work). Flushing them down the toilet is not recommended; it can send them into the ecosystem if sewage overflows before treatment—and that’s if they don’t die from cold-water shock.

But it’s not exactly a range of convenient and pleasant options, which might explain why people resort to dumping their fish tanks into harbours, creeks or neighbourhood stormwater retention ponds. Brook Schryer, who specializes in aquatic species at the Invading Species Awareness Program (ISAP) at the Ontario Federation of Anglers and Hunters, remembers a citizen calling about a pond in Kitchener, Ont., teeming with goldfish. He looked up the area on Google Maps and found satellite imagery of the pond in question: “You could see specks of gold. I could not believe the amount of orange in that water.” Stormwater ponds slowly empty into larger waterways, Hamilton Harbour being one of them. Schryer’s program does what it can to educate the public with presentations and social media messaging on why they shouldn’t dump their pets in the water. But “once a species is established, they’re almost impossible to eradicate,” he says. “At that point, it becomes about management and mitigation.”

Officials in Hamilton have been working toward that for a while. Last year, Boston’s team implanted tags in some larger goldfish to track their movements. They learned the fish aggregate in shallow waters in spring and summer, meaning crews will know where to find them if they want to remove them. In 2021, the team plans to implement smaller tags that can be scanned when the fish are re-caught; the ratio of tagged to untagged goldfish they catch will give them an idea of the overall number in the harbour.

The viability of removing the fish is something Boston expects to discuss this year with officials from the province, the Royal Botanical Gardens and Environment and Climate Change Canada. For now, she’s pushing for signs to be installed on the harbourfront trail reminding pet owners to not dump their scaly friends in the water.

But the ultimate solution, says Theysmeyer, “is fixing the water.” Local treatment plants are undergoing upgrades that should make a difference: in cleaner water, indigenous fish species can make a comeback and even prey on the invaders. And from a purely scientific perspective, the fact that conditions in the harbour have improved enough to support any kind of fish is encouraging, Theysmeyer says. “But it’s not the right kind of fish,” he adds. “That’s for sure.”

This article appears in print in the February 2021 issue of Maclean’s magazine with the headline, “The price of gold in Steeltown.” Subscribe to the monthly print magazine here.