The lush forests of … Antarctica? 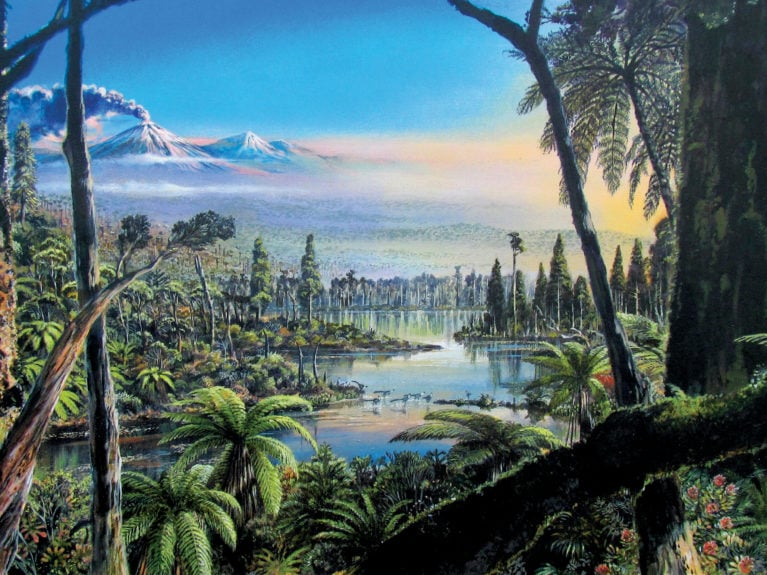 Using evidence from the core sample, this painting hypothesizes what the now-frozen South Pole might have looked like 90 million years ago (Courtesy of James McKay/Alfred-Wegener-Institut under Creative Commons licence CC-BY 4.0)

Giant conifers and tree ferns grew in the swampy terrain, towering over a thick understorey of flowering shrubs. The nearby lake was choked with algae. It was warmer than Vancouver, and rained nearly as much.

This is a new, detailed portrait of the South Pole in Antarctica from about 90 million years ago, thanks to a core sample of perfectly preserved fossil forest soil—complete with roots—neatly drilled out of what is now seabed during a recent scientific expedition.

While it has long been known that parts of Antarctica were forested and warm during the age of the dinosaurs, a new discovery reported in the April edition of the journal Nature reveals that the landscape near Earth’s most southern axis once was lush, too.

The contrast between that moist, warm land and the desolate, frozen place we now call the White Continent couldn’t be more stark.

“For most people, it is probably unthinkable that there was a rainforest in Antarctica at one point in the past, because now it’s an ice-covered continent,” says the study’s co-author, Johann Klages, a sedimentologist of polar continental margins at the Alfred Wegener Institute in Bremerhaven, Germany.

The finding suggests the climate of that time—known as the mid-Cretaceous period, about 25 million years before dinosaurs died out—was more extreme than scientists had imagined.

Klages and other scientists are trying to figure out just what it would take for that ancient, exceedingly warm climate to reappear. By reconstructing the plants that lived near the South Pole 90 million years ago, they can also reconstruct the climate that allowed them to thrive. They are, in effect, bringing a ghost world back to life.

“There is a lot we can learn from the paleoclimate record about what the climate system is capable of,” says Shawn Marshall, a climate scientist and glaciologist at the University of Calgary.

The polar regions are especially important parts of the climate puzzle. For reasons climate modellers only partly understand, high carbon dioxide concentrations in the atmosphere warm the poles far more than they warm the equator, says Marshall (who was not involved in the Nature study). That phenomenon is happening now in both the Antarctic and the Arctic, so the poles provide important clues about how quickly climates can lock into new patterns.

“Anything we can understand about this is going to help us understand our future; this is what warmer worlds look like,” he says. “And that’s the path we’re on.”

For example, the Arctic was once warm and forested, says professor Dame Jane Francis, director of the British Antarctic Survey. An expert in fossil forests, she is a co-author of the Nature paper and also helped find a 45-million-year-old mummified forest on Axel Heiberg Island in the Canadian Arctic in 1986. She recalls walking across thick leaf beds of the ancient forest floor, hearing the mummified plants crunch under her footsteps. The warm, wet forest had been home to flying lemurs and turtles.

“These fossil forests are amazing and they provide us with a window into the past,” she says.

Until about three million years ago, forests stretched to the north coast of Ellesmere Island. Then, abruptly, the climate changed, the forests died off and Arctic glaciation set in.

By contrast, the ice sheets covering Antarctica formed 35 to 40 million years ago. Getting a piece of its fossil record from long before then—during the Cretaceous period, one of the hottest in Earth’s history—near the South Pole had long been a scientific goal. But how to find it? Klages says previous expeditions in western Antarctica had come up short, unable to drill through the continent’s thick kilometres of tightly compacted ice.

So scientists decided to take another tack. What if they drilled down into Earth’s crust from the bottom of the ocean, just as oil rigs do? They ended up with MARUM-MeBo70, a remotely operated 10-tonne device that sits on four legs on the sea floor, attached by an electronic umbilical cord to a research ship.

They opted to explore near the very underside of the planet, off the continental shelf of western Antarctica in the Amundsen Sea Embayment, where two huge glacier systems, the Thwaites and Pine Island, are in the throes of alarmingly rapid retreat.

Through seismological images, they saw a tilted layer of crust covered by 1,000 metres of ocean. They thought the layer could be pretty old, likely thrust upward through the actions of tectonic plates pushing up against one another long ago, Klages says. But they didn’t know whether it was a piece of the land they coveted or a less desirable bit of ancient ocean or coast.

Dodging ferocious Antarctic storms and icebergs that threatened their ship, they drilled 30 metres into the seabed, bringing up a three-metre-long, six-centimetre-wide sample of Earth’s crust that had lain undisturbed for about 90 million years. To their astonishment, they could see immediately that it was ancient forest soil, without a scrap of residue from the fossil marine realm, packed with pollen and spores.

“At that point we already knew, this is something special,” Klages says.

So special that the team opted not to open the core on board the ship, but rather take it back to Germany for a computerized tomography (CT) scan at a local hospital first. They were in for another surprise. Most fossils, while fascinating, are squished and inert, needing to be reassembled. This batch of soil showed an intact network of roots, so vibrant it was almost as if the plants were still growing.

“Basically it is the same as if you go to a forest near you that has some swampy conditions and you drill a core there,” Klages says.

The chunk of crust Klages dug up sat less than 900 kilometres from the South Pole, near a rift connecting Antarctica and the ancient continent of Zealandia, the above-water remnants of which now form New Zealand.

It is the nearest to the South Pole of any bit of Cretaceous forest found so far. But when Klages and his team tried to reproduce in current climate models the growing conditions a rainforest requires at such high latitudes, the models struggled. They had to take into account the fact that plants would have to endure four months of total darkness. It meant carbon dioxide concentrations as well as temperatures would have to be high.

The models ended up demanding a carbon dioxide concentration of at least 1,000 parts per million (ppm) or even 1,680 ppm, compared to the 280 ppm humans evolved in and the 416 ppm today. But those levels would likely make it too hot for plants to live at the equator, noted James Basinger, a paleobotanist at the University of Saskatchewan in Saskatoon who did not work on the Nature paper.

Basinger says the inability of the models to fully reproduce what actually happened in the mid-Cretaceous period shows how fundamentally different the climate was during such a hot greenhouse period of the planet’s past. And how urgently scientific work at the poles is needed to figure out ancient times as the world again sprints toward an extreme climate.

For example, U of Calgary’s Marshall says one possibility is that during these extreme periods, air currents of tropical heat from the equator may have been able to travel to the poles. Today, that heat typically stops at a latitude of about 35 degrees, which is below the Great Lakes. It’s a jaw-dropping rethink for climate modellers and another indication of how sensitive the climate is to being tipped into unknown regimes.

“If you push the system, it will run with it, and amplify any kind of a nudge in ways we’re not quite understanding—but we should be respecting,” Marshall says.

And while some might point to extraordinarily high carbon concentrations of the Cretaceous period as a comforting sign that life can persist even at those extremes, Marshall points out that humans need different conditions than swampy tree ferns. 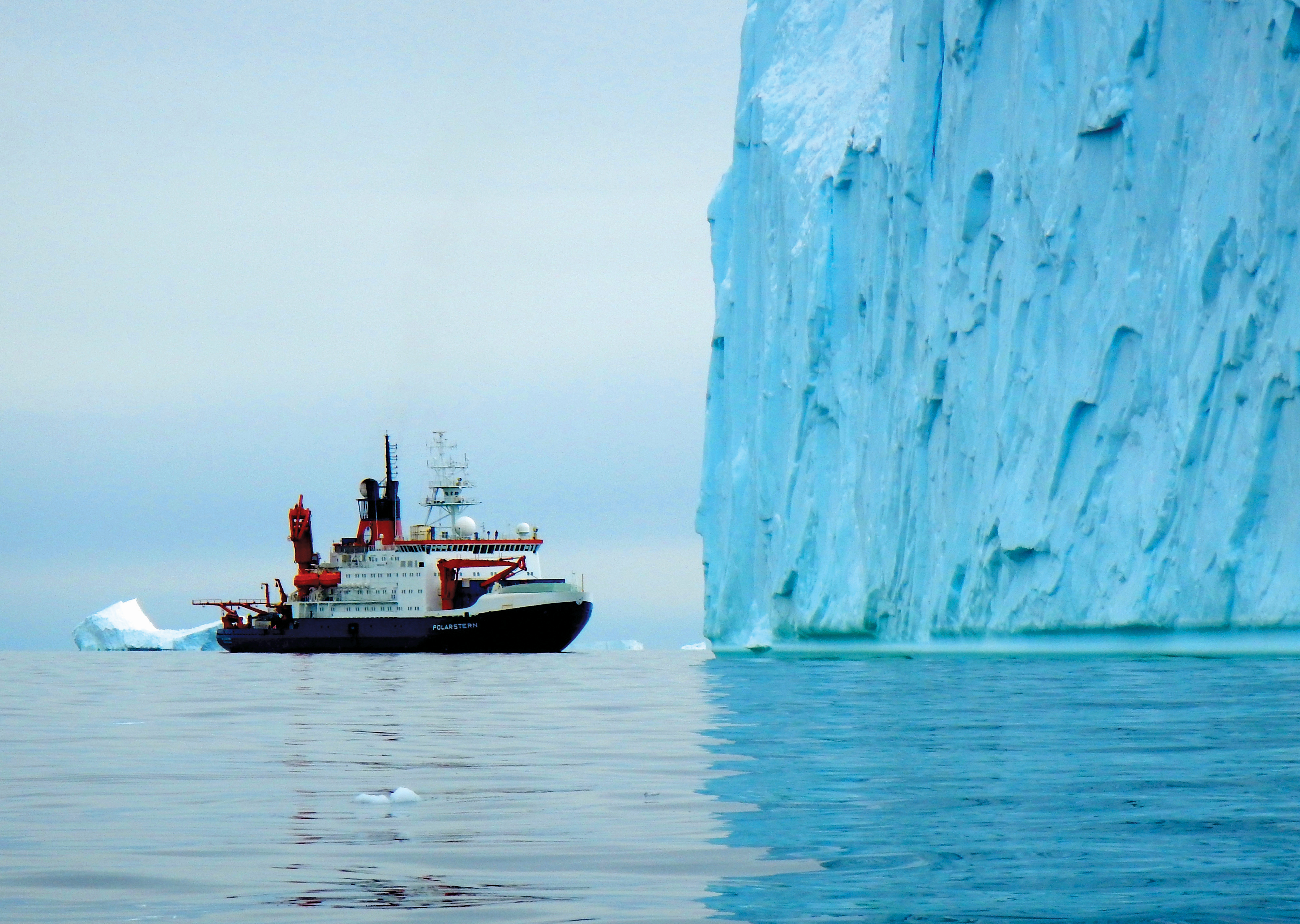 “The Earth would get through it fine,” he says. “But humans wouldn’t because we’ve built our whole society and all of our infrastructure around what we’ve experienced over the past few centuries.”

For her part, Francis, of the British Antarctic Survey, says the sobering lesson from the Nature paper is just how rapidly carbon concentrations are rising in today’s atmosphere, even compared to other extreme times in the planet’s history.

“I don’t think anybody has ever seen the speed at which it’s going up now,” she says.

This article appears in print in the June 2020 issue of Maclean’s magazine with the headline, “Antarctica’s lush forests.” Subscribe to the monthly print magazine here.