The story of the lost leatherback turtle of East Bay, N.S.

It was the ﬁrst concrete evidence of the leatherback in the Bras d’Or. Experts say her 'third eye' led the creature astray—and eventually to an icy death 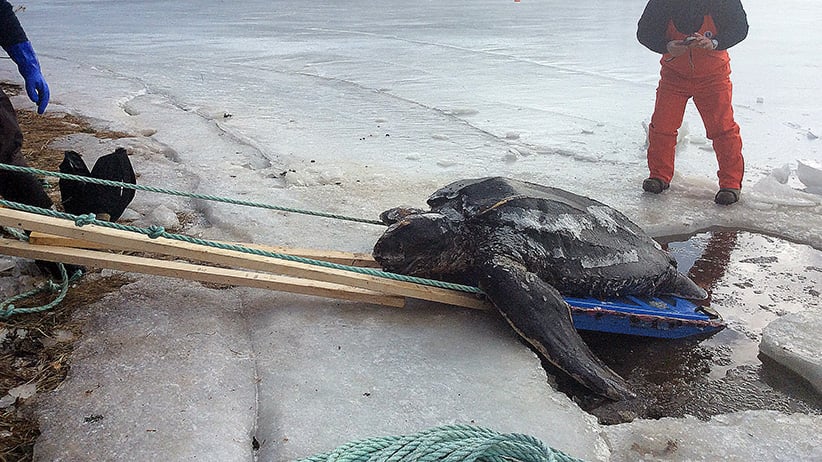 A dead leatherback turtle is removed from the waters of Bras d’Or Lake in Nova Scotia. (Sue MacLean)

She looked, according to Ron MacLean, the man who found her, like a dark shadow along the shoreline. From a distance, she could have been a small overturned boat under the ice. But when MacLean, a retired Canadian Coast Guard chief engineer who ice ﬁshes for smelt and sea trout, got nearer, he identiﬁed her.

She was a leatherback, the largest species of sea turtle in the world, and she was in front of his house in East Bay, N.S. This section of the brackish Bras d’Or Lake at the heart of Cape Breton Island was very far away from the Caribbean beaches where, at about this time of year, she might otherwise be laying her eggs. Though she was dead, the cold northern waters had preserved her: her sleek body with the contours and colour of antique artillery and her prehistoric eyes.

When authorities with the Department of Fisheries and Oceans saw MacLean’s pictures of the turtle, they immediately wanted her carcass. There had been sightings in the past, but this was the ﬁrst concrete evidence of a leatherback in the Bras d’Or, which is called a lake but is really a labyrinthine inland sea, with three ways in from the Atlantic. One of those entrances—likely the northern passage above Boularderie Island—was this turtle’s doorway into the maze. Leatherbacks are listed as endangered in Canada under the Species at Risk Act, and too frequently drown entangled in nets and ﬁshing gear. But this turtle likely fell prey to her own confusion.

Up until about 20 years ago, the presence of leatherback turtles off this country’s east coast was thought to be largely accidental, a question of tropical marine reptiles lost in unforgiving Canadian waters. Old newspaper accounts spoke of “sea monsters” washed up on the coast of Maine, and ﬁshermen swore that they often saw turtles—big ones—out at sea. It would take until the late ’90s for scientists to recognize the eastern coasts as a crucial feeding area for the turtles, who arrive after wintering in South and Central America and in the Caribbean. “Atlantic Canada is the U.N. for turtles,” says Kathleen Martin, executive director of the Canadian Sea Turtle Network, a conservationist group that helps spearhead research into leatherbacks.

They are elusive creatures, and basic facts about population numbers and life expectancy remain unknown (they may live as long as 100 years). Our knowledge of them only started improving after Martin’s group, working alongside Mike James, a Fisheries and Oceans scientist, began to ask commercial ﬁshermen and other interested parties to report sightings. James combines this intel with data collected by attaching gadgetry to the animals while on beaches and at sea. Those devices show the turtles can hold their breath for an hour and a half, travel as far as 120 km a day and dive more than a kilometre below the ocean’s surface. Though they nest in such warm locales as Trinidad and Costa Rica, they’ve been seen swimming among ice floes here, where abundant food makes them fat and barrel-shaped, with thick layers of blubber.

Their preferred prey is lion’s mane, the largest of the jellyﬁsh. Given the chance, the turtles will eat the equivalent of their body weight in these delicacies each day, despite the burn of jellyﬁsh stingers and body temperature as cold as the icy waters in which they swim, “like an ice cube in your stomach,” says James. One video clip, ﬁlmed with a camera secured to a turtle’s head, shows it gobbling up one icy jelly after another like Pac-Man. Frequently they rise after such dives, basking their leathery carapaces in the sun.

The turtles regulate their core body temperatures in part through the action of this digestion. But they are aided by an intricate system in which cold blood flowing in from the extremities is warmed by the hot blood pumped alongside it from the heart. They’ve had plenty of evolutionary time to come up with these ingenious mechanisms. The species is 150 million years old—leatherbacks lived alongside Tyrannosaurus rex—and they are often called the dinosaur that survived.

A biological device in the crowns of their heads, a kind of third eye called the “pink spot,” is thought to read subtle seasonal changes in daylight, and to prompt migration. It may be that our turtle, after following her fondness for jellyﬁsh into the Bras d’Or Lake (under at least one bridge and past other human encampments), was following that pull of instinct when she strayed deeper and deeper in, only to turn up dead in the ice below the MacLean house. She weighed just 293 kg—well short of the 400 kg most leatherbacks weigh so late in the season—and, having become entirely lost, likely starved.

Collecting her body was a challenge. She was just shy of two metres long and extremely heavy, and there was no road to where she lay bobbing in the shallow waters. MacLean, a ﬁt 64, ended up chipping at the ice with an axe, then using his tractor to help lift her into a government truck. She ﬁlled the cargo bed.