Decades ago, wall lizards from the Mediterranean got a toehold near Victoria. Now they’re island-hopping. 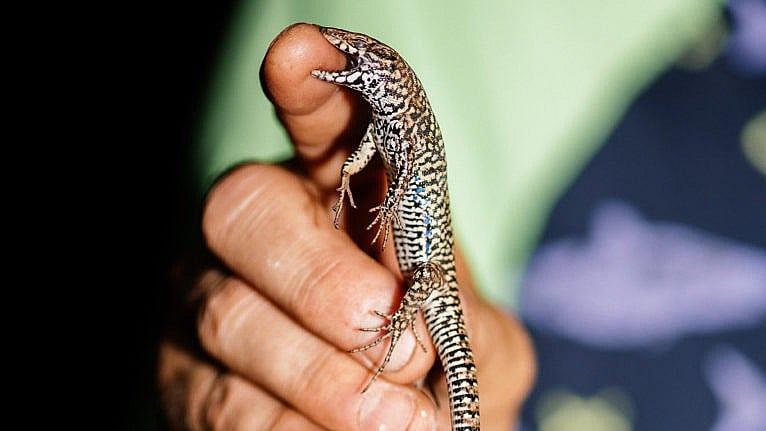 To satisfy his Fitbit, Gavin Hanke frequently goes for long walks from his home in Victoria that double as reconnaissance missions. Eyeballing rock walls, stucco, wood piles and gardens—sometimes evoking strange looks from residents—Hanke searches for an invader to Vancouver Island’s ecosystem: Podarcis muralis, or the common wall lizard.

When he spots one while “lizarding”—easy to do around the B.C. capital—Hanke snaps photos with his iPhone, geotagging and uploading the images to his growing collection on the iNaturalist app.

Hanke, the Royal B.C. Museum’s curator of vertebrate zoology, has been sounding the alarm about wall lizards since 2006. Until recently, few communities took notice.

READ: How humans and squirrels team up to collect tree seeds—and save the planet

Native to the Mediterranean, the reptiles seem perfectly happy sunning themselves throughout the southern half of Vancouver Island. Hanke estimates their current population in British Columbia to be between 500,000 and 700,000. They grow as long as 23 cm, but are generally smaller. And with climate change, they appear to be spreading: last year, a few were even spotted on the Lower Mainland, near Chilliwack.

The lizard’s provenance in B.C. can be traced to Rudy’s Pet Park, a roadside zoo that opened in Saanich in 1957 with monkeys, lions and, among other creatures, a dozen wall lizards imported from Italy. When the now-deceased owner Rudy Bauersachs closed it in 1970, the bigger animals went to the Greater Vancouver Zoo. According to academic studies, the lizards he simply turned loose.

The creatures live for up to 10 years, devouring insects, fruits, baby garter snakes and local frog species. They even munch their own young, who, seemingly aware, scurry away soon after hatching.

On Vancouver Island they’ve established populations in Langford, Ucluelet, Nanaimo and other communities, appearing as far north as Campbell River, 265 km from Victoria. They sneak trips hiding in camping gear, and their eggs get ferried around in plants and potting soils. Children aid their distribution by taking them home as pets.

A reptile lover since his boyhood in Manitoba, Hanke sees dozens daily in his garden. And though tracking and stemming their spread is part of his mandate with the museum, he confesses that, to him, having lizards on his property is “a kid’s dream come true.” In the capital region, the species is “so stupidly abundant we aren’t ever going to eradicate them,” he says. “It’s probably wrong to say it, but they’re actually quite charming.”

Still, on a scale of one to 10, Hanke assesses the threat to B.C.’s ecosystems as “an eight, if not a nine.” He worries for native species such as the sharp-tailed snake, the Pacific chorus frog and the northwestern alligator lizard. The wall lizard feasts on them all.

When he discovers new populations, Hanke notifies municipal or provincial authorities, because wall lizards can be eliminated from an area if caught early. Though B.C. has a response plan to fend off invasive species, the lizards are so well-established that the province is largely down to preventing their expansion through awareness programs, and by encouraging people to report sightings. Some residents are resorting to improvised measures, such as DIY traps and even BB guns.

Last May on Salt Spring Island, retired biologist Pat Miller took photos of a lizard lazing on stone-slab steps leading to her back deck, then contacted Hanke. His verdict: wall lizard. Hanke is particularly concerned because the Gulf Islands, with their rich flora and fauna, are a perfect habitat for them. “They’re going to love it.”

Alarmed, Miller alerted the Salt Spring Island Conservancy, a society dedicated to protecting the island’s native plants and animals, which urged its 270 members to report additional sightings. She initially planned to trap her lizard, but it disappeared for a few weeks after a bout of cool weather. She’s since spotted more, and as of late July another person had reported a sighting in the same area, near the Vesuvius Ferry Terminal. “We can still go after them,” says Miller.

Hanke is pro-extermination, if it’s done humanely. Some islanders use buckets sunk in the ground with water in the bottom and pitched at a 45-degree angle; lizards that slide in for a drink can’t climb out. Hanke himself employs a technique called “lizard noosing,” using a fishing rod with a small loop at the tip: “Just pull up sharply,” he says, “and you’ve got him.” To euthanize them, he advises putting captured lizards in a fridge until they lapse into a torpid state, then into a freezer. “They have to be frozen solid,” he cautions. “They can survive partial freezing.”

Not everyone sees the creatures as a menace. Last June, the Times Colonist newspaper was bombarded with heated emails over a feature on the best ways to trap and liquidate them. One reader wrote that her family lives in harmony with lizards on their farm, adding: “They don’t eat the roses like the deer, carry disease like the rats or buy up all of our affordable housing like the Torontonians.”

But Hanke rejects suggestions from some lizard lovers that populations can be left to natural predators. The hundreds of thousands on Vancouver Island, he warns, are agricultural pests preying on much-needed pollinators. Though Hanke has no direct evidence that the lizards eat honeybees, he believes eyewitness reports of them doing so. “They will eat mason bees, bumblebees, even wasps,” he says. “If they’ll take a wasp, they’ll take anything.”

This article appears in print in the October 2021 issue of Maclean’s magazine with the headline, “Climbing the walls.” Subscribe to the monthly print magazine here.