These stranded B.C. salmon are in good hands

Image of the Week: A rockslide on the Fraser River cut off the fish from their spawning grounds, inspiring an inventive—and Herculean—rescue effort 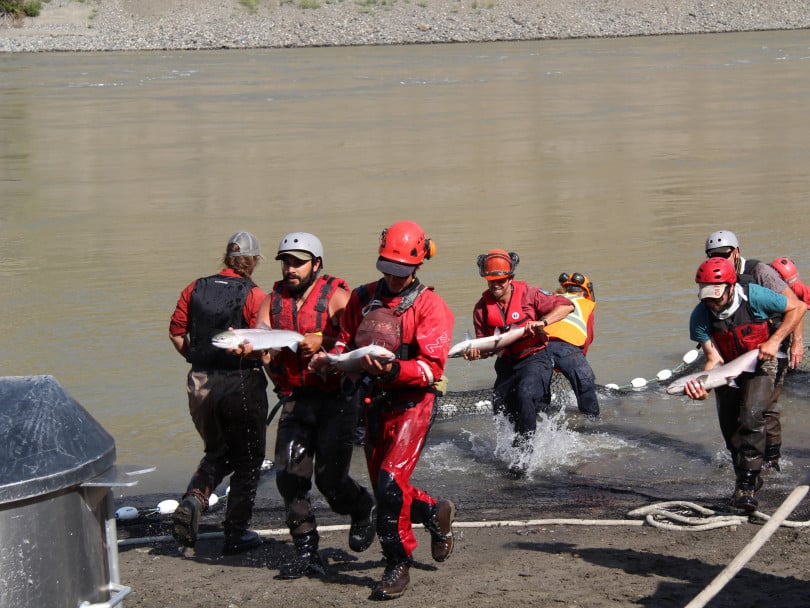 On June 21, a landslide tore off the side of a cliff overhanging the Fraser River, near Big Bar, north of Lillooet in British Columbia’s Interior. Massive chunks of hillside plunged into the narrow waterway, causing a broad waterfall and blocking the route for anything swimming through. That’s an issue for B.C.’s sockeye and chinook salmon, which are racing upstream to spawn for the season. Beyond their importance to First Nations in the region and local fishermen, numerous animals—including the Southern Resident killer whale, an endangered species—depend on the salmon spawn for their survival. This week, around 2,000 salmon are butting up against the blockade daily, with just a small percentage making it through; in a few weeks, that number will multiply to thousands hitting the barrier every hour. The solution? An emergency response of around 80 people working round-the-clock to craft a natural passage and mitigate further debris from falling. In the meantime, if you can’t get through the waterfall, you can always go around it: government workers are looking at fish ladders, fish wheels and helicopters to deliver the salmon upstream in a slightly less natural way. Pictured above, rescue workers are loading the hefty salmon by hand into large buckets attached to helicopters, which can fly as many as 100 salmon per trip. But time is running out. The floodgates will need to open before the flood of fish can pour through.